We haven’t been to a lot of museums with walk-around Zoe yet – in fact, we’ve often wondered when kids start to “get it” at a museum, and honestly, I thought she’d be bored. We’ve been to the California Science Center with a somewhat mobile Zoe, and that place is basically BUILT for kids. But it’s not a “museum” per se.

Well, we finally made it to the Natural History Museum a couple of weeks ago, and it did not disappoint!

First, turns out she likes dinosaurs, which is super helpful at a museum with dinosaur bones a the entrance. I always wonder why kids don’t feel bad for them (they are gone, after all). Maybe some do? Mine does not. She thought they were cool, and she REALLY loved the “stuffed animal” dioramas, running from one to the next with delight (she really likes stuffed animals). 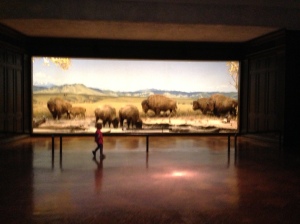 She also liked the Butterfly Pavilion, where live butterflies fluttered around everywhere – but she didn’t love the idea of one actually landing ON her. She really wanted to “have” a blue one, and as it turned out one died while we were there. Without missing a beat, one of the museum workers picked it up and started handing it around to kids (I also found this odd). 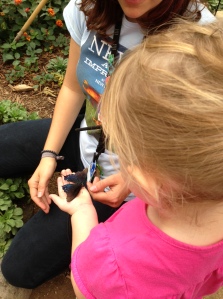 Downstairs they had live rats (in a cage, but ew), a cafe (with no live rats, we hope) and a woodsy outdoor playground, where our daughter promptly pooped in her diaper and announced it. Speaking of which, we are still struggling with poop… She’s just not interested in going poop in the potty. Anyway, that won’t stop us from finding another museum! Unlike Småland at IKEA, they don’t seem to care where you poop ;)