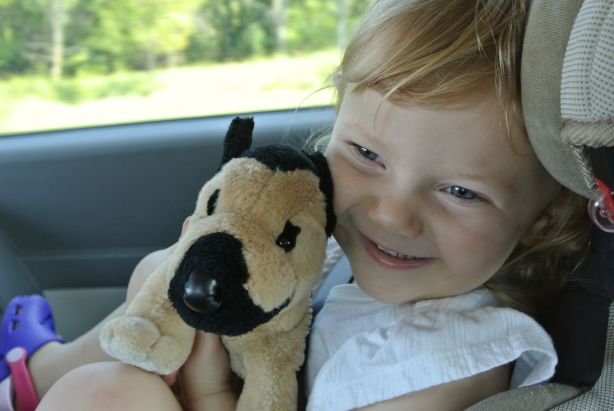 You read that right. Our almost 3-year-old daughter just flew First Class to Minnesota. In contrast, I was 39 when I flew First Class, and it was a redeye, so I didn’t even get any royal treatment – though I still felt really cool ;)

Zoe’s First Class travels were thanks to Daddy’s frequent flyer miles, and while it was an older Delta plane (with a video screen that dropped down from the ceiling), it was still well worth it. That said, the day we were set to fly I started thinking, “I bet not a lot of kids fly First Class.” So I went online for guidance.

Turns out there are many opinions on kids in First Class… Here are a few of the headlines I immediately found online:

There were a lot like above, highlighting the raging debate on whether/not kids should even be allowed in the first class cabin with the weary (or just wealthy) folks who really “need” it. I chose to focus in on this one:

And I may have gotten a glass of Chardonnay the moment I sat down (and perhaps another). Anyway, Zoe was an “first class” First Class passenger. She only had one fussy moment, and ironically, the young girl (20?) who sat next to me was quite an angry person and had an outburst that made Zoe seem like the adult.

I was away from my seat while this girl was getting on the plane, shoving her bag angrily in the overhead bin, and slamming her things down on my seat. When I realized she was about to sit in my seat, I let her know that it was mine (1B), and she said “No, it’s not. B is the window.” I pointed to the sign above, and when she realized my seat was not hers, she huffed “They gave me the wrong seat!“, threw her book and headphones against the wall by the window (her seat), sat down with crossed arms and tightly closed her eyes.

After the episode, 3 flight attendants came by to check on ME and gave me that “I’m not sure what’s up with her… are you OK?” look. And my almost 3-year-old leaned over and said “Mommy, why is she so angry?” and kept trying to check on her for the first hour of the flight. Even the cutest kid on the planet couldn’t melt my icy travel buddy.

So, for anyone wondering whether or not kids can sit in First Class, I’m pretty sure it depends on the kid. And I’m pretty sure if I paid a whole lot of money for a First Class seat, I wouldn’t want to sit by an unruly toddler (or screaming infant) OR an angry young adult (or a quiet but stinky middle-aged businessman, either, for that matter).

But I completely believe that any parent who has to wrangle that kid through parking the car, taking the courtesy van to the airport, checking a bag, surviving the security line, entertaining at the gate, and talking them into buckling their seatbelt on the plane then obsessively ensuring that they don’t do any kid-like things to bother other passengers probably deserves a First Class seat, just for the effort ;)