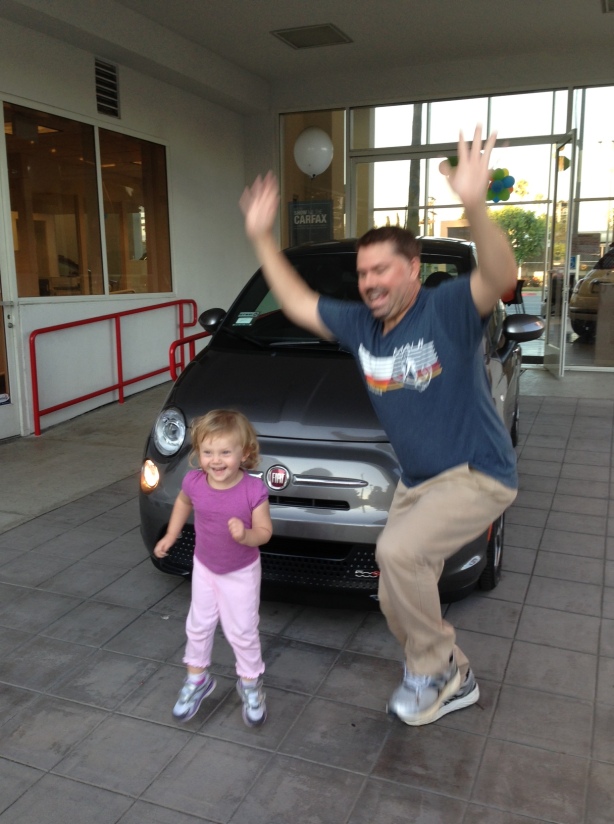 Let’s hope we don’t need Tony, but we did it – we got ourselves a FIAT!

Not only that, we got the new Fiat 500e – it’s ELECTRIC! While this isn’t specifically a ZOE story, I must say that she was all for it. She wanted a “tiny car” (actually, she wanted a “tiny yellow car”, but hey, we got close).

Earlier this year Bart and I started talking about getting a car to replace our “we love it but gas sure is expensive” Acura TSX, which Bart had owned for almost a decade and was paid off.  I’ve been wanting a tiny car for a long time, so I joked “Why don’t we get a Fiat?”, assuming the obvious “Um, we have a car seat and a stroller and a diaper bag and small containers of snacks – oh, and a kid” would be the response I’d get from my dear husband.

I believe I have Bart’s father to thank for my new tiny car. When I asked my question, Grandpa Bernie said “Why don’t you get the electric one?”

My husband’s ears perked up. The most gadgety man I know was clearly thinking, “A new GADGET?!” And thus his research began:

Believe me, there was a lot more research involved (and yes, I created a google spreadsheet to calculate costs of other options including hybrids), and we settled on the Fiat 500e. Then, the obsession began. First, the car didn’t actually hit dealerships when expected. Then, dealers started SCRAMBLING to project when they were getting one, and due to demand, they started asking for $500 deposits to weed out the less serious inquiries.

We called LOTS of dealerships, sure we could find one without committing to the deposit. Then we went back to our local Fiat dealer – they had one in that you could test drive. And man, it is FAST (not kidding) and fun – but I am impatient… NO ONE could say when this magical car would be available.

The Prius C (our 2nd choice) started looking cuter and cuter – and a lot more accessible, but by then, my husband was hooked. So we made a deal. I gave him 1 month to find the Fiat, and if not, then on Aug 15 we’d walk into the Toyota dealership and drive out with a Prius.

Bart tracked VIN numbers on Fiat dealer sites to find one and called dealerships daily. Finally, we agreed to put down a deposit with the one he thought was most likely to “get one in” soon. And just one week later, we called our local dealer (the one where we did NOT put a deposit down), and they had a Grigio / Black Interior (our DREAM CAR!) “on its way” to them “SOON”. We drove over, signed paperwork, traded in our Acura, and drove off in our “borrowed” Acura… with no promise of when our new car would actually arrive.

And, just a week and half after signing the docs for an imaginary car, we have an actual Fiat. And I love our tiny car.

I love the red light that streaks across the dashboard at night when it’s plugged in, with the cord running under the garage door to a wall socket (we don’t have our fast charger yet…) I feel like a Jetson! I love that it’s spunky and easy to park, and oh so very cute. And Zoe loves her new tiny car, where she sits in the middle of the back seats and battles Daddy’s elbow for foot room on the armrest.

Who says the Fiat’s not a family car? ;)

One thought on “Fix It Again, Tony!”