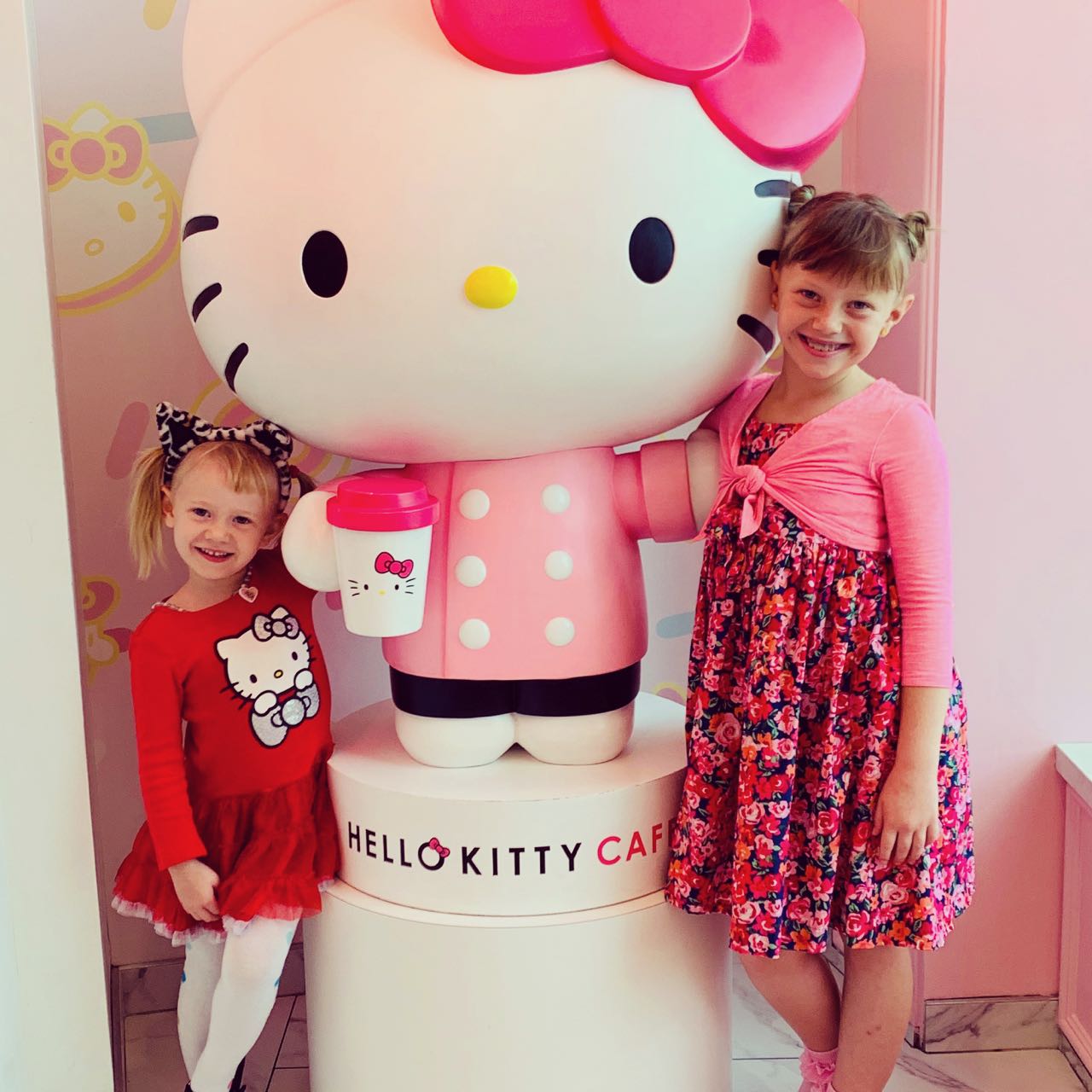 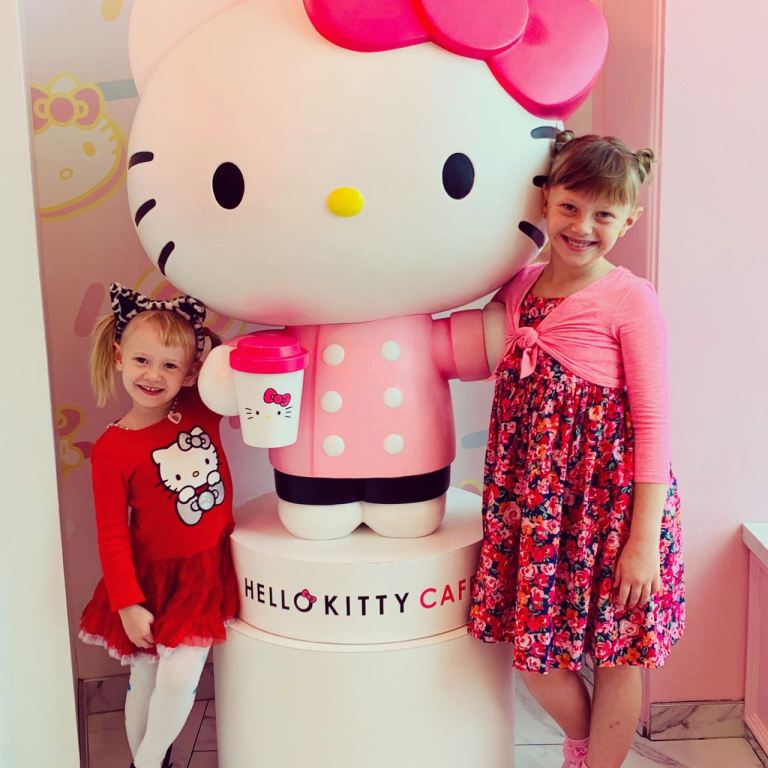 In between Italy and the Grand Canyon, there were several memorable moments. So before we kick off our GRAND trip overview, I’ll share some not-to-be-missed events. Above you’ll see a photo from the Hello Kitty Cafe in Irvine, where we met our friends Karin & Luis and their cute kids Justice & Sky for a fun-filled afternoon.

Just say “Hello Kitty”, and our kids will go pretty much anywhere. This cafe is small (very small) and also has a $55/person “afternoon tea” (which we did NOT do), but all the kids enjoyed rainbow sprinkle tiny donuts and bow-decorated macarons in rainbow colors. The “coffee” was not a highlight but DID at least look cute: 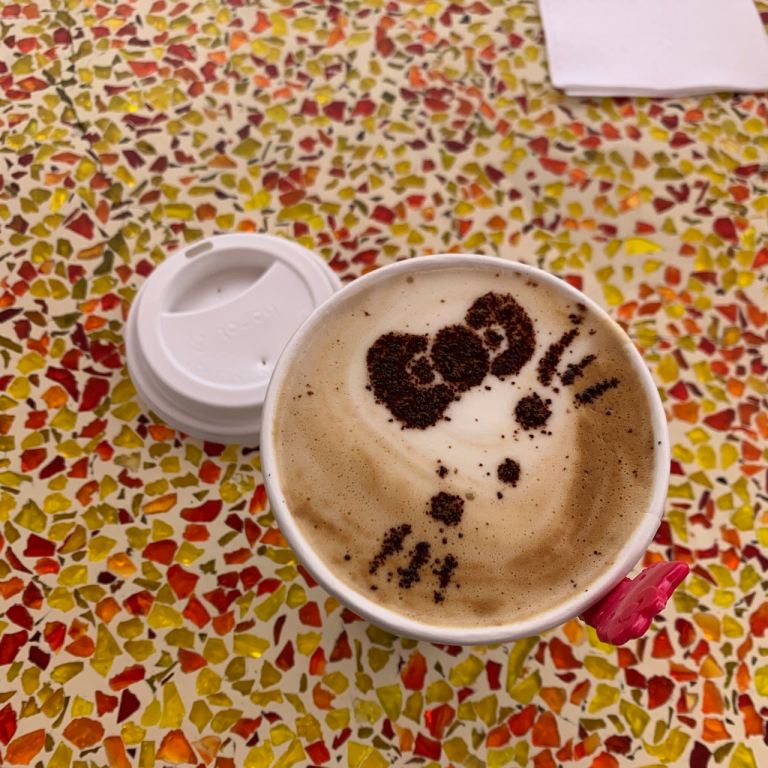 Thankfully, we were in it for the company, and that part was great! Later that weekend, we pulled out the slip ‘n’ slide that Bart had purchased weeks before (but we had never used), and it has not only the “slide” part but DUAL slides and a “pool” at the end – along with “sprinklers” along the side that Ella couldn’t stop trying to drink from – EW. The funniest slip+slide was Zoe’s unintentional one:

The following week, both girls attended Discovery Cube LA Camp (Ella = Wild Kratts’ Creature Features, Zoe = Mission to Mars Space Camp). While not as convenient as our local Monarch Camp (which is a ZOO but the kids love it – and it’s sooooo close), the topics seemed fun – and we’re trying to get Ella acclimated to the fact she will be going to a different school in the fall, so change is good… This is not an easy task so far.

Regardless, having them at the same camps but in different age groups for the summer has been great. They meet up at lunch and play periods (sisterly love), something we hope they continue to do once they are at the same elementary school in the fall.

On the last day of Discovery Cube camp, Zoe’s group shared the Mars Rovers they created and explained their choices. One of the five kids on Zoe’s team is quite the talker:

Afterwards, she said, “They wanted me to do that because I talk so much.” Not sure if that’s great OR if it’s just the fact she takes after one of her parents as an adult (me) or one of her parents as a child (Bart). There’s just no way she’s not going to talk… Below are a few pictures from the event, including Zoe with a Mechatronics Engineer from NASA’s Jet Propulsion Lab (JPL), Iona, who’s working on an ACTUAL unnamed Mars rover! 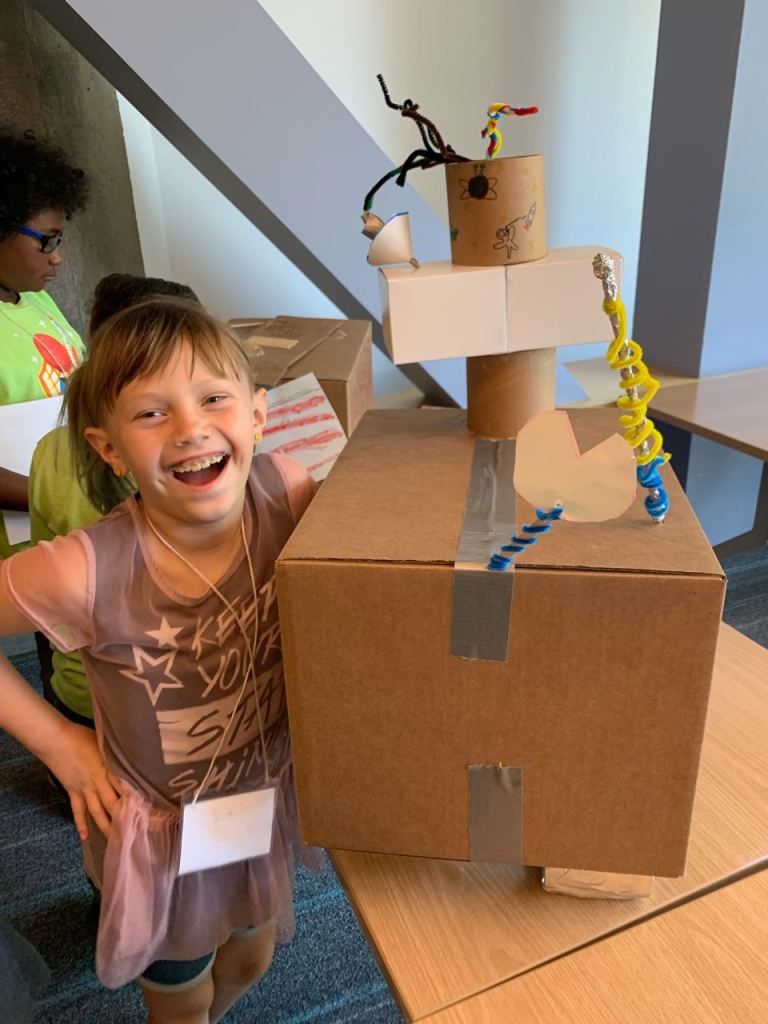 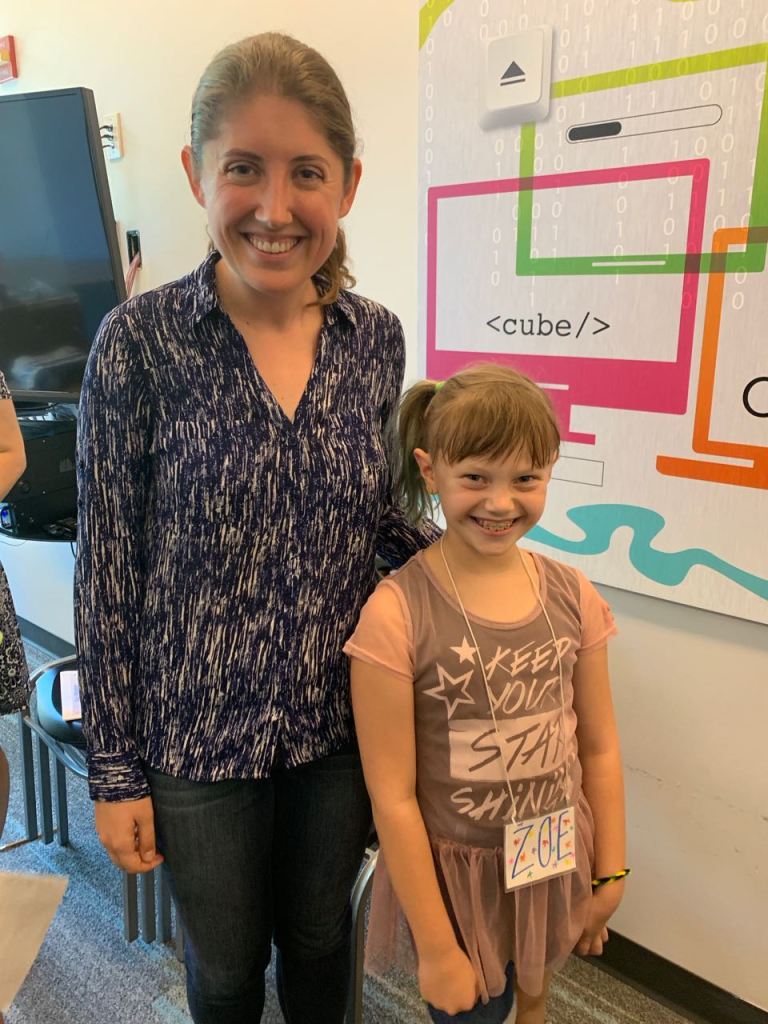 Perhaps less interesting, but fitting of the FUN topic, one morning Zoe asked me why she “didn’t have any eyebrows” (she does). I explained that they were just light in color and not to worry, girls have LOTS of ways to make eyebrows awesome. I offered to color them in so she could actually see them. She agreed. Below are her actual eyebrows with color – just like a paint-by-number:

Isn’t it AMAZING what having eyebrows does for the face?! My sister taught me this years ago when I happened to notice hers and wondered why MINE didn’t look like that (twin envy). I won’t share her secrets, but let’s just say it rocked my world. For Zoe, having eyebrows was a jarring experience. In fact, she said, “I look like Frida Kahlo”. 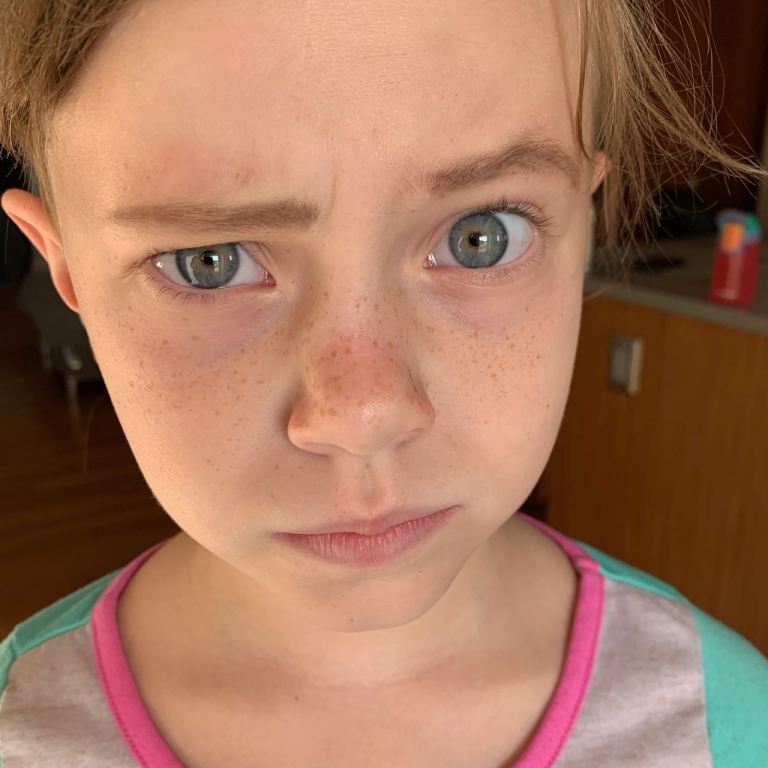 I can’t wait to remind her of that when she’s a bit older, especially given how popular DARK, painted on eyebrows are for younger girls these days.

Another FUN moment was creating our own Bento Boxes. As Zoe was entering pre-school at 2 years old, I was so sure I would be one of those moms who a) got involved and b) prepared the BEST lunches. To be clear, I have not been either of those moms – though I did make ONE bento box before she actually started school. That’s something.

To prepare for that psychotic moment, I purchased veggie cutters, rice molds, nori stamps and more – most of which I’ve never used. So as Ella enters kindergarten (and I remain concerned about her transition), I thought I’d pull those items out and have them hopefully get interested in making their OWN bento boxes. I’ll take the Saturday morning fun as a win, but not sure how sustainable (or nutritious) this practice will be…

In fairness, my sushi rice had too much vinegar (oops? I followed the recipe!). To keep them interested in using it, Bart shared some pineapple juice that cut the vinegar. I’m nothing without that guy.

Speaking of which, no “Girls Just Wanna Have Fun” post is complete without Cyndi Lauper. Thankfully, our friends Adam & Don had invited us to a night at the Hollywood Bowl to see Cyndi and the LA Philharmonic. Folks, before you watch this, keep in mind that she just turned 66 years old (OMG, I can barely stay up until 9 pm and am about 20 years younger!).

I’m not mentioning her age to cover for a less-than-awesome performance. Cyndi Lauper is amazing. However, when Zoe was 3, she discovered Cyndi Lauper and found a video of a (long) live performance she loved to watch. So she has some Cyndi experience. When I showed her the video below, she said, “that’s not as great as her other videos.”  I personally disagree, and I’m pretty sure I’ve listened to more of her music (and the PRODUCED vs. live versions) than an 8-year-old, right?!

Regardless, we girls really DO just wanna have fun. Up next is an 8-day adventure to the Grand Canyon. Talk about fun! I’ll leave you with some “Mom, take this picture” photos of our girls who are at an awesome age for photo opportunities – and what mom doesn’t want willing victims?! 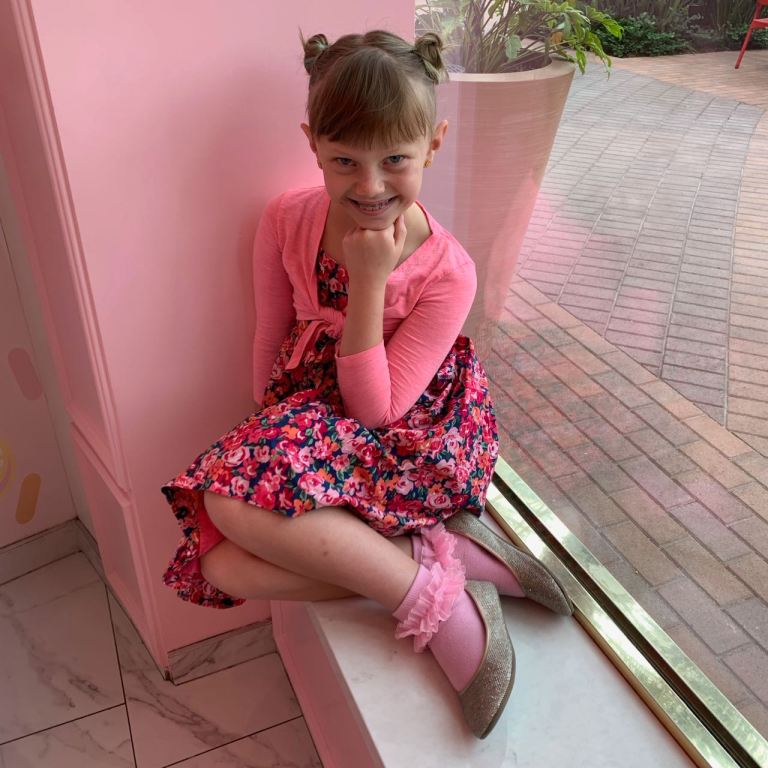