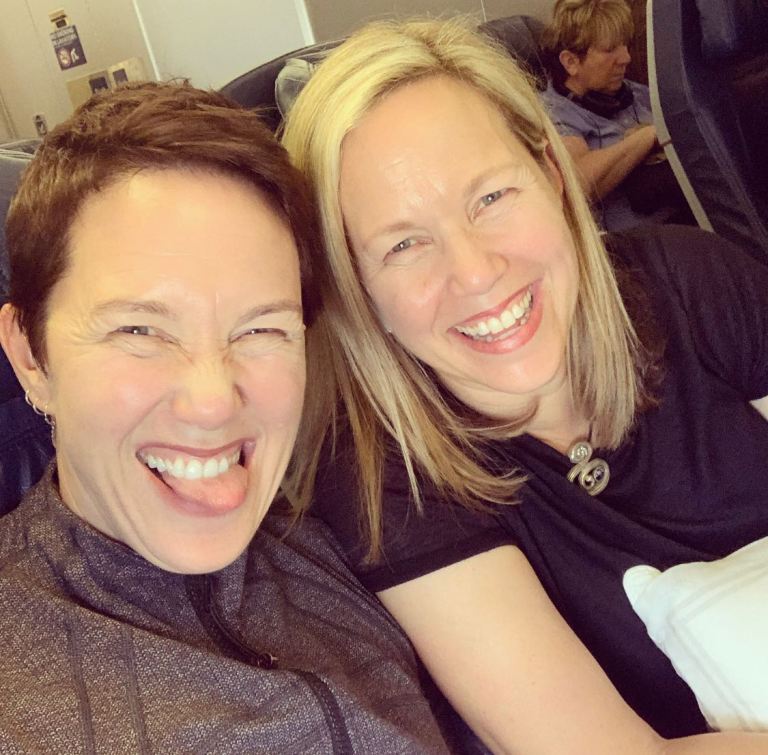 Ironically, I’m writing this blog post from the backseat of a mini-van driving across Nevada on the way to the Grand Canyon. Yep, so.far.behind. But better late than never, since we had an incredible time in Italy!

It all started on Mother’s Day when my husband insisted that Zoe wanted to sing for us, a performance that required both our family and my sister’s to be on video at the same time. We showed up on schedule to find a not-so-interested-in-singing Zoe but instead two large 9×12 envelopes, one for me, one for Shawn. Inside each was a large format card that said, “You’re going to Italy!”, with pictures of Italian landmarks all over it and a sweet sign-off from our families.

WHAT A GIFT! I thought it was a joke, since Shawn and I had planned to meet up in Vegas for a short weekend this summer. Maybe our sweet husbands had coordinated that trip, complete with a stay at the Venetian and fine cuisine at Eataly… ITALY with a twist! Nope. They meant Italy, the country.

Sorry to skip forward but as we were ending our week together, Shawn mentioned that she thought it was likely our husbands thought we would drag our feet on planning or struggle to find a time to go. I agreed. Clearly, they know us well enough to know a girls trip to Italy is RIGHT ON but if we’re right, they underestimated what Wonder Twin powers can do.

And so, with May 12 as the date of our first offer of a trip to Italy, we were on a plane to Milan on June 21 for a full week, complete with a Google doc to track our travels. Here’s the short version:

When asked about our trip, my GO-TO response is that the BEST part was time with my sister, hands-down, period. The second best part was that we kept “arriving” at these really cool un-planned experiences (in addition to the ones we DID plan).

To highlight, here are some PLANNED events:

PARMA, the birthplace of Parmigiano Reggiano. Seriously, our lunch was amazing. It was at a small place called Officina Alimentare Dedicata that my husband found online. We had 3 parmesan cheeses (age 18 months, 24 months and 30 months) and the prosciutto was the best ever. We were EXHAUSTED from travel, and even when rain fell on us at the end of the meal, it was still worth it. SIDE NOTE: We actually arrived in Milan to a severe thunderstorm with torrential rain, so my super-sister drove in a foreign country dodging lightning.

SIENA, a true medieval city. We stayed just outside the city and drove in for dinner, then enjoyed a Savor Siena walking food + wine tour. From learning about the ancient neighborhoods to tasting “pizza”, Siena-style (which is stuffed focaccia and called ciaccino) and walking through the city with a knowledgeable guide, we had a great experience. Never mind that it was near 100 degrees. SIDE NOTE: It was between 95 and 105 degrees during our entire Italian adventure. Oh, and even before our guided tour, we explored the Duomo, too!

FLORENCE, cradle of the Renaissance. We had a blast in Florence with planned trips to Uffizi Museum, Palazzo Vecchio, Ponte Vecchio (the bridge of gold, which our mom remembers fondly about Italy), a Pasta-making class, an Escape Room (we can’t talk about this one) and Yoga on a rooftop overlooking the Duomo at sunset. And that was just the PLANNED part. Every second of that (minus escape room) was amazing. 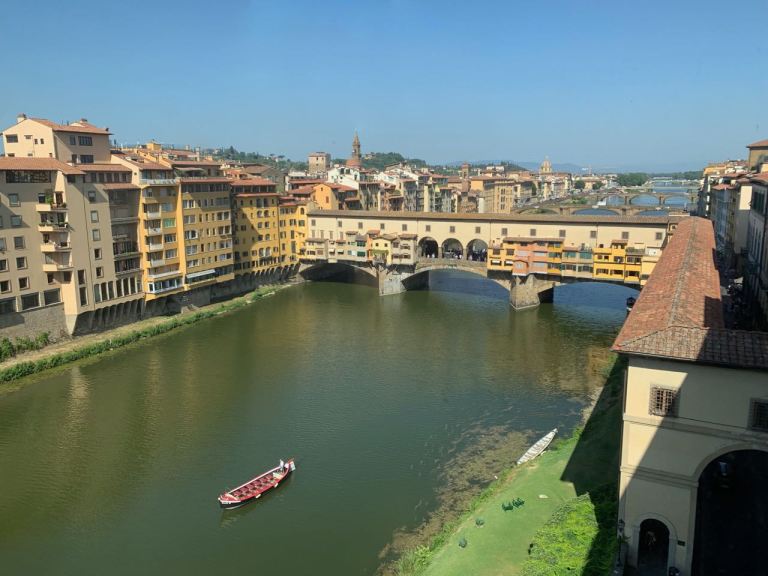 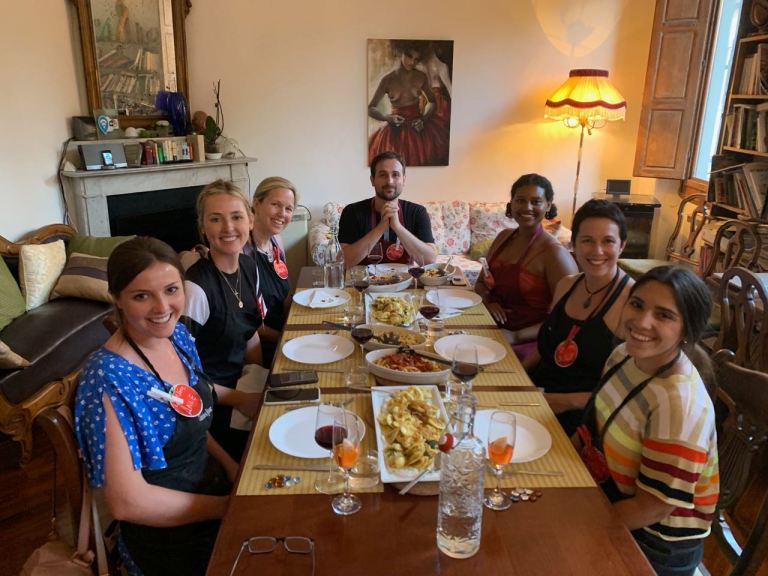 We also hiked to the Piazzale Michelangelo, offering gorgeous views of the city and toured the gazillion rooms of the Palazzo Pitti by the Boboli Gardens. Below you’ll see a picture of us in ridiculous hats purchased from a street side vendor (OMG it was hot – we were desperate – don’t judge). On this day, which ended with yoga on a rooftop, we walked 8.2 miles and probably sweated out a gallon or more of fluids. Thankfully, we stayed hydrated and suffered through a steady stream of pasta, bread, pizza and gelato to keep us going. SIDE NOTE: I lost 1.4 pounds on this trip. No joke. 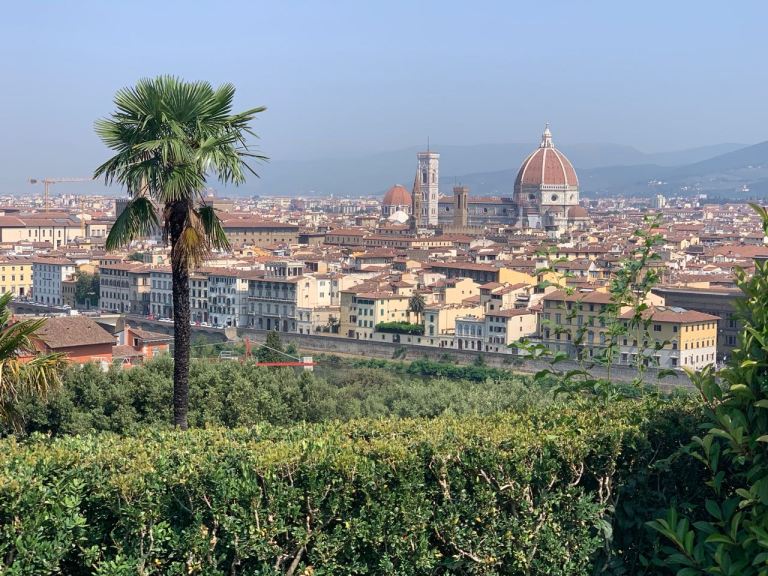 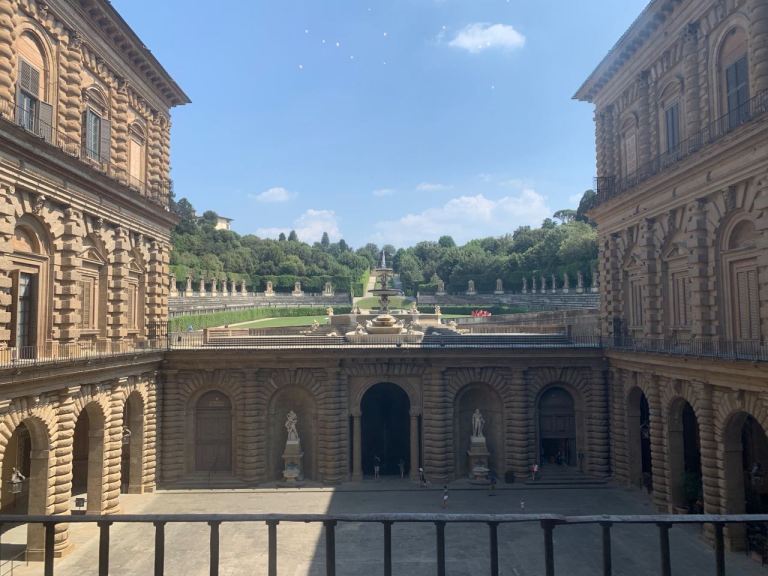 If you’re still with me, I’ll go quickly through the UNPLANNED event, which ended up being just a list of 100 more reasons to move to Italy. No, I won’t list 100, and no, mom, I’m not moving to Italy.

PIENZA, the “Utopian Medieval Town”. After driving through picturesque countryside, we arrived to a processional that we think (all clues were in Italian…) was a wedding celebration, without the wedding part. It’s possible there was a bride and groom “out of costume” but we’re just not sure. There was, however, a marching band and a canopy-covered priest along with locals, winding through town on a path of beautiful flowers:

SAN GIMIGNANO, white wine in Tuscany! Apparently Tuscany is known for red wine (think Chianti), but there’s a section of the region that grows the Vernaccia grape, the only place in the world that does so! And we found it. In fact, we happened upon a wine tasting in town where we were the only ones there, and the caretakers were terrifically attentive. When we said we’d forego the red wine tasting to maximize our vernaccia tasting, they brought us one of the best Sangiovese wines I’ve ever had, just because. Yum. SIDE NOTE: If you’ve not had Finocchiona, a fennel Italian sausage (on cheese board below and on my plate any time we found it), you should.

MORE FLORENCE, street performances galore. We happened upon an opera singer in Piazza della Repubblica, a string quartet just half a block from our Airbnb in Piazza Santa Trinita, a jazz band playing outdoors on our walk back from our pasta class, four guys in shorts and t-shirts on violins plus an accordion player rocking everything from classical to contemporary music, and a huge Pride parade in Milan as we stepped out of the train station. Though all were fantastic experiences, I actually bought a CD from the violin guys (only to figure out we have only 2 places left in our lives that pay CDs…) They were full of LIFE and people blocked the streets to listen, moving out of the way as a random car came through, then huddling back in close.

TUNNELS, everywhere. I don’t know how or why I started it, but as we were exiting a tunnel, I tried to capture the exact spot where you could see the view through the end of the tunnel (which is not possible when you’re IN the tunnel, given light conditions – at least on my iPhone). Then I couldn’t stop. And so, I have several pictures of getting to the end of the tunnel and entering a bright, beautiful countryside. I hope that’s a sign of things to come.

On our last day in Florence, I realized that a restaurant called La Bussola that my friend, Laura, had told me I MUST go to was only half a block from our Airbnb. It was fantastic and possibly one of my favorite meals, though there were a lot of my favorite meals. SIDE NOTE: I could have lived in that Airbnb. It was tiny, clean, everything in its place and centrally located – and the owner was delightful. Oh, and it had air conditioning, which I’m sure sways my opinion, but still.

Honestly, there’s so much more to write about, but I think I hit the high points. I’ll share a few more pictures here, but if you’re interested, I’ve uploaded MORE HERE of our favorites – and EVEN MORE HERE including both my photos and Shawn’s.

Overall, we had a BLAST, and seriously, what HUSBANDS send their wives off to Italy?! We are two lucky ladies, and I for one will be forever thankful to have had so much “alone time” with my ACTUAL other half in such an incredible place. 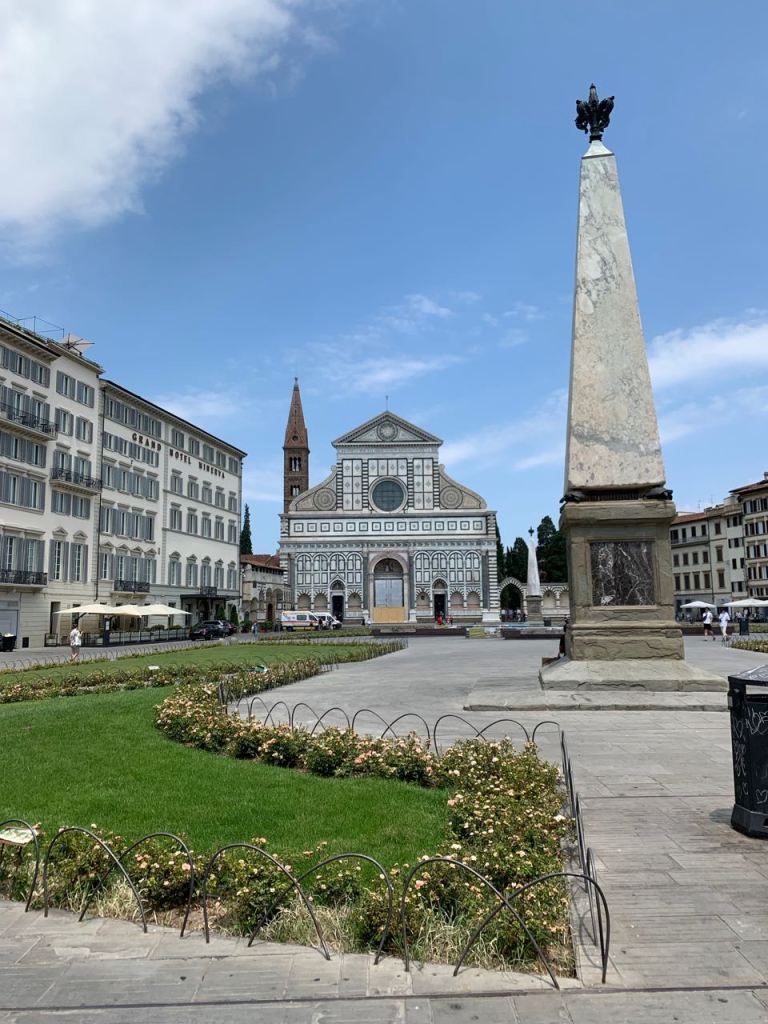 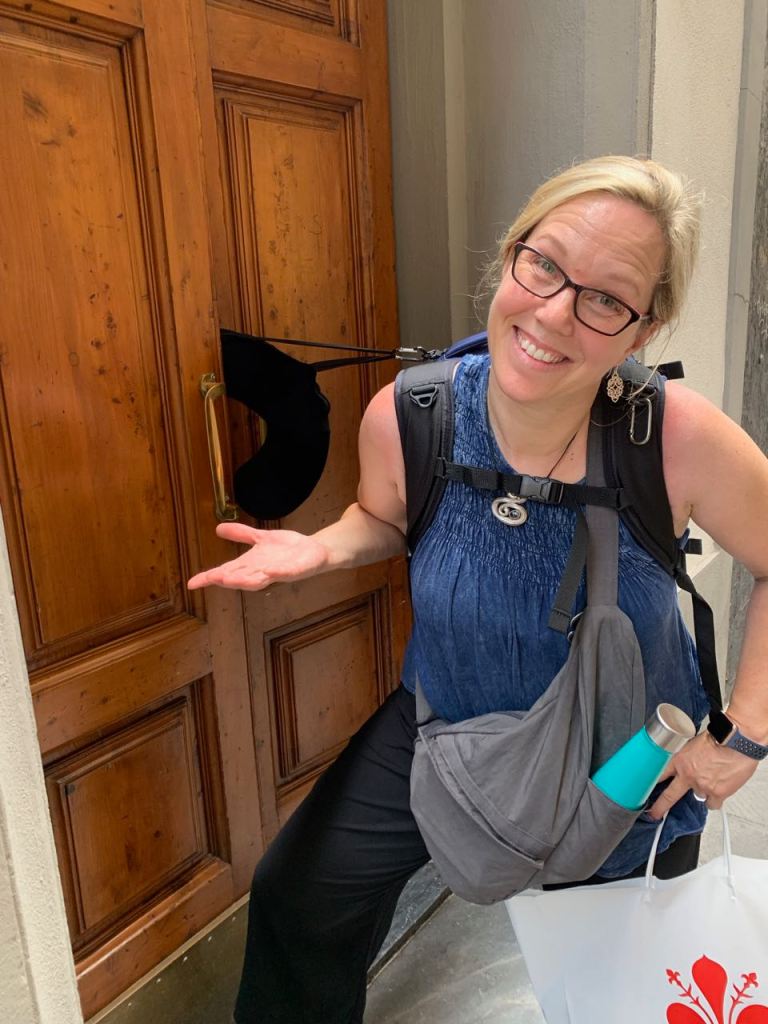 One thought on “Italy. Or So Many Duomos, So Little Time.”