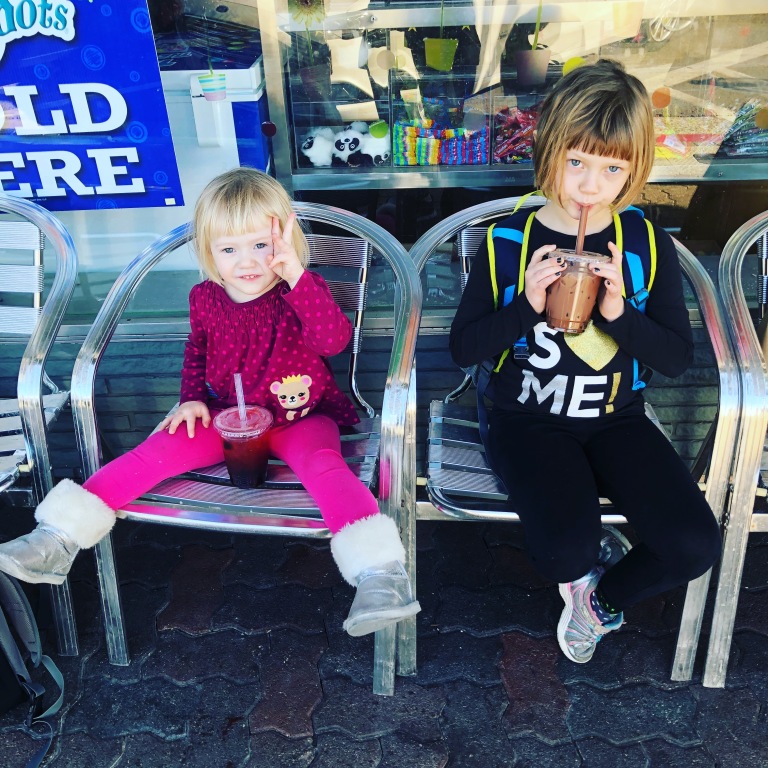 Ok, there is without a doubt MORE I have to say about glamping.

Our friends, Karin and Luis, invited us months ago to rent vintage RVs at a camp called The Holidays in San Clemente, about 1.5 hours south of us in Orange County. And MONTHS ago, it sounded like an awesome idea! The website has super cool photos of 5 retro trailers in a circle on a campsite area with bocce ball, cornhole, horseshoes and a huge fire pit in the center – a “community”, they say.

It’s near the beach, up on a bluff, and you can almost smell the melting marshmallows from the photos alone. Here’s a shot of our actual view in the campsite, the first night’s sunset, and the view from the bluff: 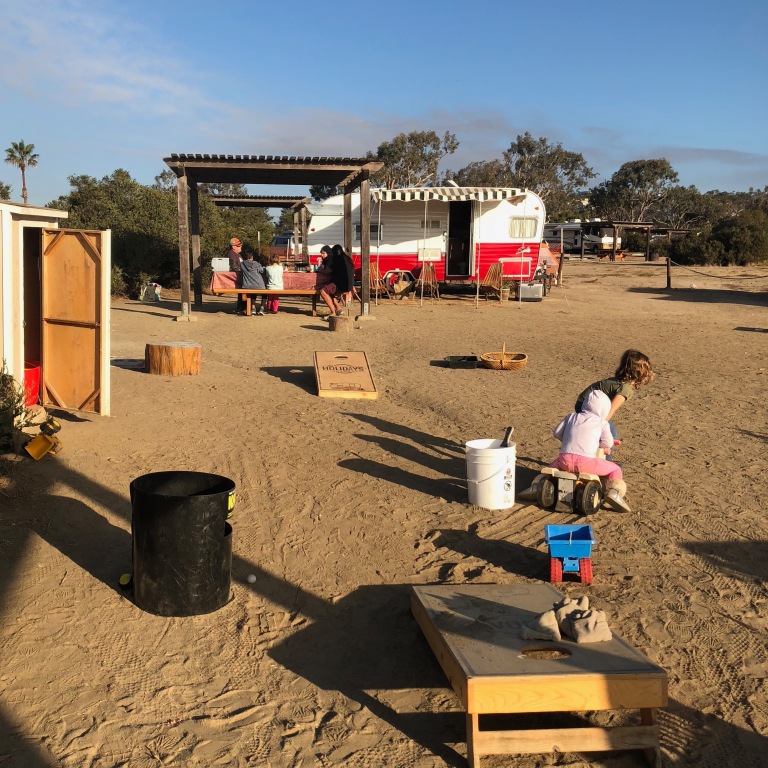 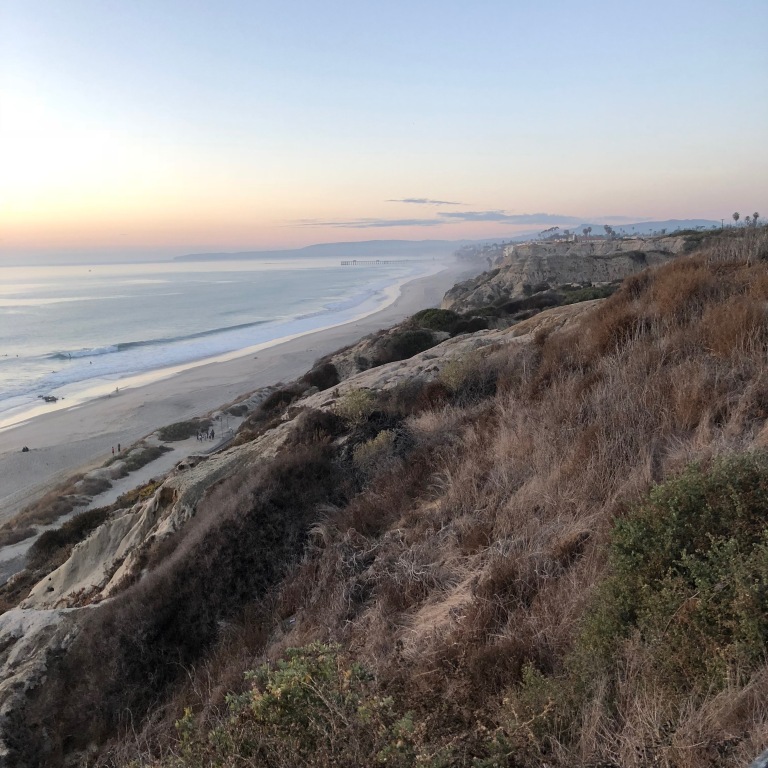 But before we got there, I started looking at the weather… Yes, I know the rest of the country is experiencing an incredible cold wave – including a “bomb cyclone” in Boston! – but let’s just say I’m “sensitive” to cold temperatures. To me, anything in the 60s is “cold”, especially when sitting outside, even when you’re “glamping”. The HIGHS were going to be in the 60s – one day might get to 68, one up to 61… Brrrrrr.

Clearly, we went anyway, dusting off the warmest things we own, prepared to do whatever it took to survive (ha!) On the first night, we grilled out and sang Happy Birthday to Karin, celebrating with an incredible olive oil chocolate bundt cake my insanely talented husband baked. It was gluten free but you’d never guess it, and he replaced the shaved chocolate with Dagoba Chocodrops which added “chocolate surprises” to the texture. It was delicious. And we didn’t freeze.

On the first full day we made breakfast at the campsite then headed down to the beach, intentionally NOT putting our children in swimsuits so we wouldn’t have to hear them whine about the cold. Our friends spend more time at the beach and are clearly smarter than we are, wearing tank-tops and swimsuits… I was sure I’d have the last laugh.

In short time (no pun intended) I was sweating, Zoe had run into the waves, soaking her pants and by the end, Ella had gotten drenched by a surprise wave, after which she was inconsolable until I stripped her down completely and snuggled her in a towel.

Oops? See those cliffs behind Zoe? The campsite’s up top and to get back up there, I pushed a grumpy, ocean soaked 30-pound child in a stroller with 2 bags of “picnic lunch” hanging off the sides up what felt like an 80 degree incline. I’m pretty sure a healthier person than I would have struggled. I thought my head was going to explode. It did not :) Between Bart’s questionable knees and my bad hip, it’s clear why smart people have children earlier in life…

One extra cool thing that happened at the campsite was that in the tent beside us there was a family with THREE little girls, all almost mirror ages of the three girls in our group. One of them, who was Zoe’s age almost exactly, was named Chloe (I kid you not), and you would have thought those two were separated at birth. Their parents were also super nice, and though we missed getting to say goodbye, Chloe left Zoe a note asking her to be her pen pal, including her mailing address on the outside (clearly in her mom’s writing) and a simple note inside in her own hand:

We headed into town on the second night for dinner to a pizza shop called Brick (yum) and after many many many hours of these kids climbing in a short tree, playing games (their favorite was “family”) and practically rolling around in the dirt, I’m pretty sure they made memories that are sure to last.

What you can’t see is how dirty all their fingernails are. Ew. On the final full day, we headed to the pier for crepes then to a really cool playground I had found in my pre-trip research (yes, I have a Google sheet filled with options). 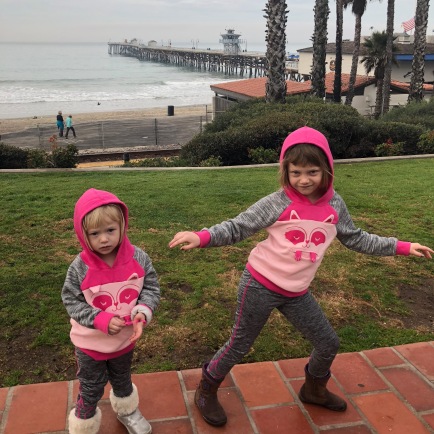 After two sunny (Thursday/Friday) days, we were socked in on Saturday, which didn’t really seem to matter until around 6 pm (in the darkness), when the solar powered battery that controlled the small stove – and the heat – ran out in our friends’ trailer… Solar power needs sunlight. Go figure. Thankfully the very kind (and earthy) owner Andy, who we had met earlier in the day, walked Bart and Luis through exchanging the battery with another unit.

But that didn’t stop us from lowering the heat in our trailer, where the kids were huddled up after dinner around the table watching Despicable Me 2 and waiting for s’more time for the 3rd consecutive night. Overall, disaster averted and on Sunday morning, we got up early and headed out to miss traffic, spent hours unpacking and washing everything, and got ready for the first full week of the year to start (which included me traveling to Seattle for 3 days).

If the rest of this year ends up as awesome as the start, filled with friends and adventures, I have NO DOUBT that we are in for an incredible 2018. Speaking of which, I’ll wrap up with excerpts from the “More / Less” list that Zoe and I made together for the new year (What do you want to do MORE of, What do you want to do LESS of). It’s a tricky way to get around those pesky “resolutions” and still get your head straight.

And there you have it. We’ll see how that all turns out.