Before you ask, Halloween ended up NOT being the wiz-bang event I expected – which may be disappointing to you after I wrote a whole “Prelude” to the subject. We DID go trick-or-treating, but as you know, Halloween fell on a Tuesday, so there was the usual mad scramble of getting the kids home from school, feeding them, and THEN getting them into costume.

By the time that was done, my dear husband was down for the count, finally getting the stomach flu the rest of the house had survived the week before. Poor guy. Unable to be far from the potty, he wished me and his parents good luck with the kids, and we headed off to a friend’s neighborhood (there’s no trick-or-treating in ours).

Barely qualified to parent, I am still proud to have gotten them out of the house in costume AND with treat bags. I did NOT however get even ONE good picture… I did get two fuzzy ones, though: 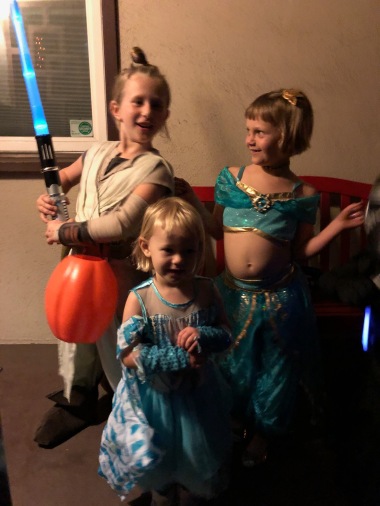 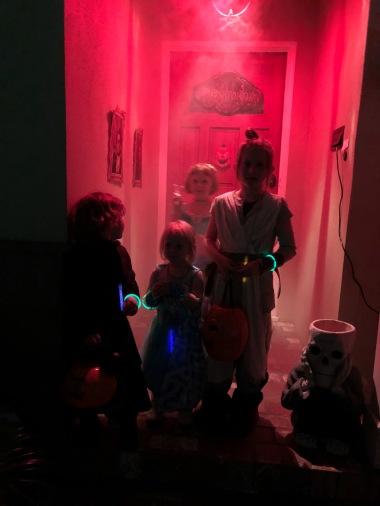 Proof positive that we DID make it out (and that Zoe did in fact bare her midriff).

The CUTEST parts were watching Ella try and keep up with the “big kids”, constantly 10 toddling steps behind – though she was FEARLESS and often FIRST to the scary house doors – and watching Grandpa offer repeatedly to “hold” Ella’s bag of candy. He’s got a bit of a sweet tooth :)

I also realized after my last blog post that I’ve been hoarding cute pictures of these kids (or perhaps I’m just way behind?) of recent trips to some of their favorite spots, so here goes, an attempt to get caught up!

NATURAL HISTORY MUSEUM (9/23/17) – For DINO Fest! The “Fossil” card from Zoe above is also from this trip to the museum, and yes, they are rubbing paint on a metal dinosaur (and their outfits) below. 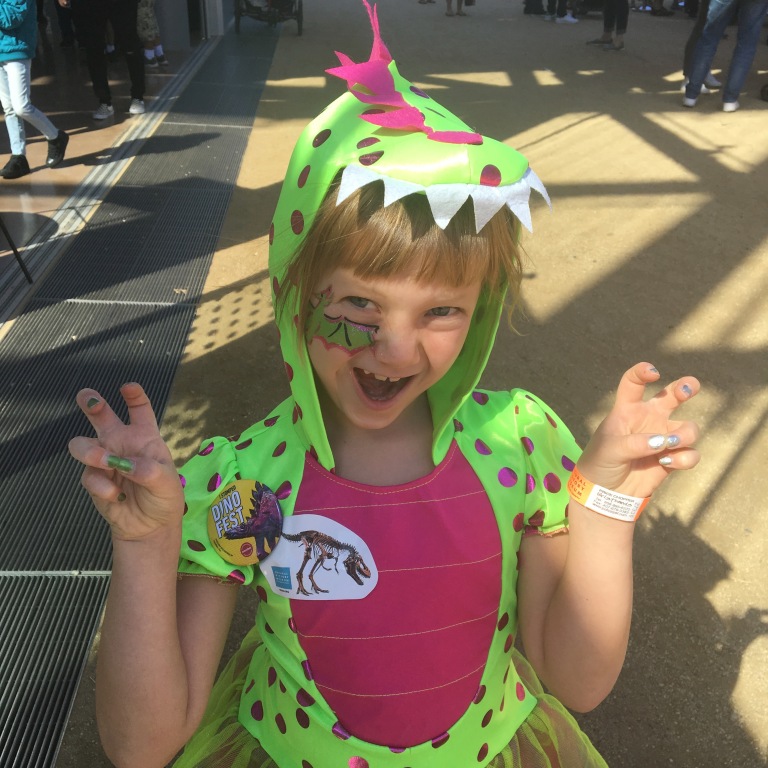 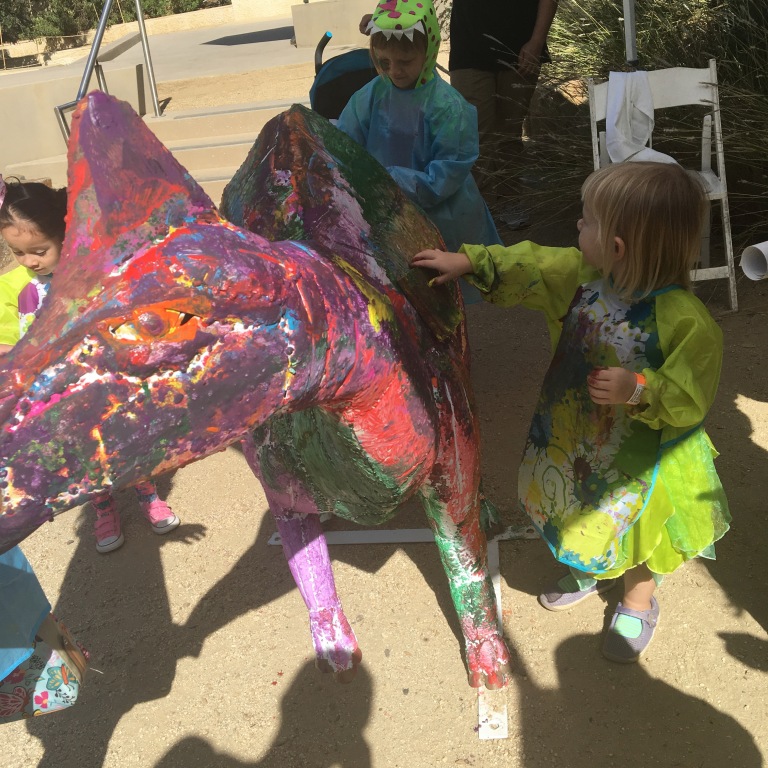 DISCOVERY CUBE LA (10/8/17) – First but not last trip to Doc McStuffins exhibit, where you can wander around giving “checkups” to babies and pets, a very hands-on day. The tractor shot below is in a room filled with hay bales that little boys were running all over. Bart’s nightmare (the hay, not the boys – one day it will be the boys). 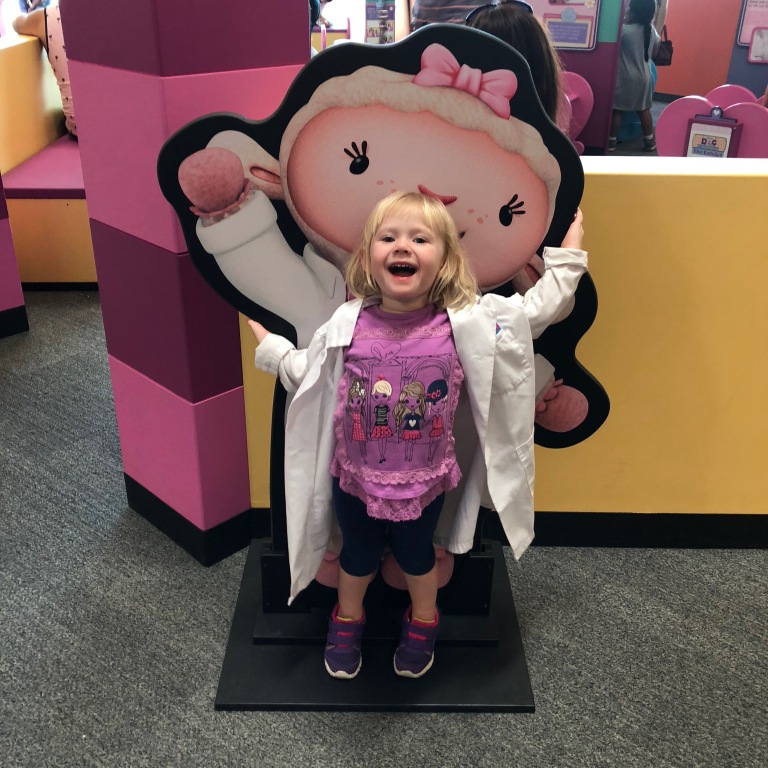 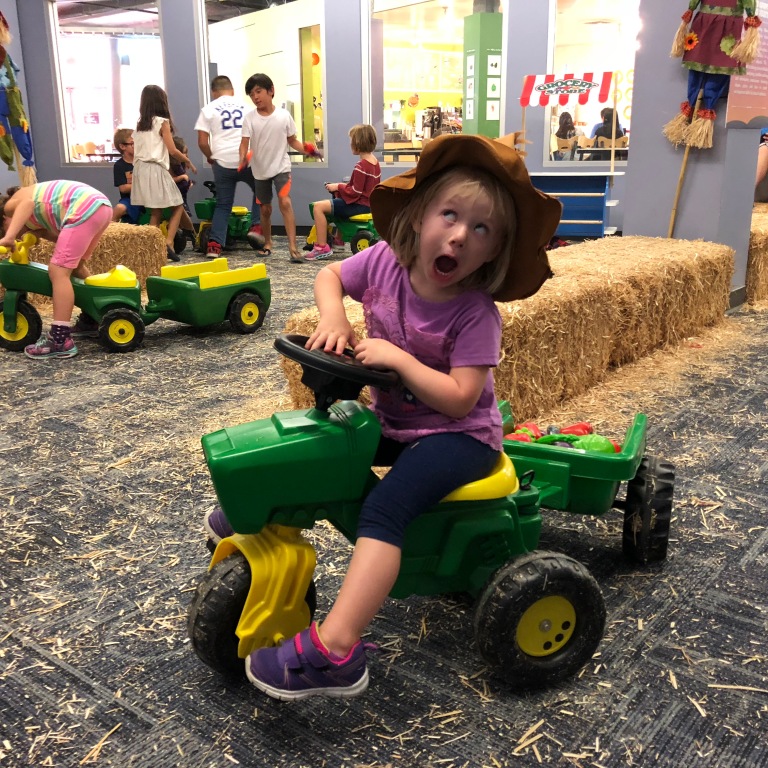 THE DISCOVERY CUBE, Again (10/21/17) – Our 2nd trip to see Doc McStuffins, this time with cousin Signe! While she’s an awesome kid, Signe reminded us that two kids are all we can handle… There was a moment when Bart was surfing on his phone, and I was “watching” all 3 of them, as they ran in 3 different directions. Impossible. I have no idea how people have 3 kids and all 3 survive. Bart’s parents had FIVE! Insane. 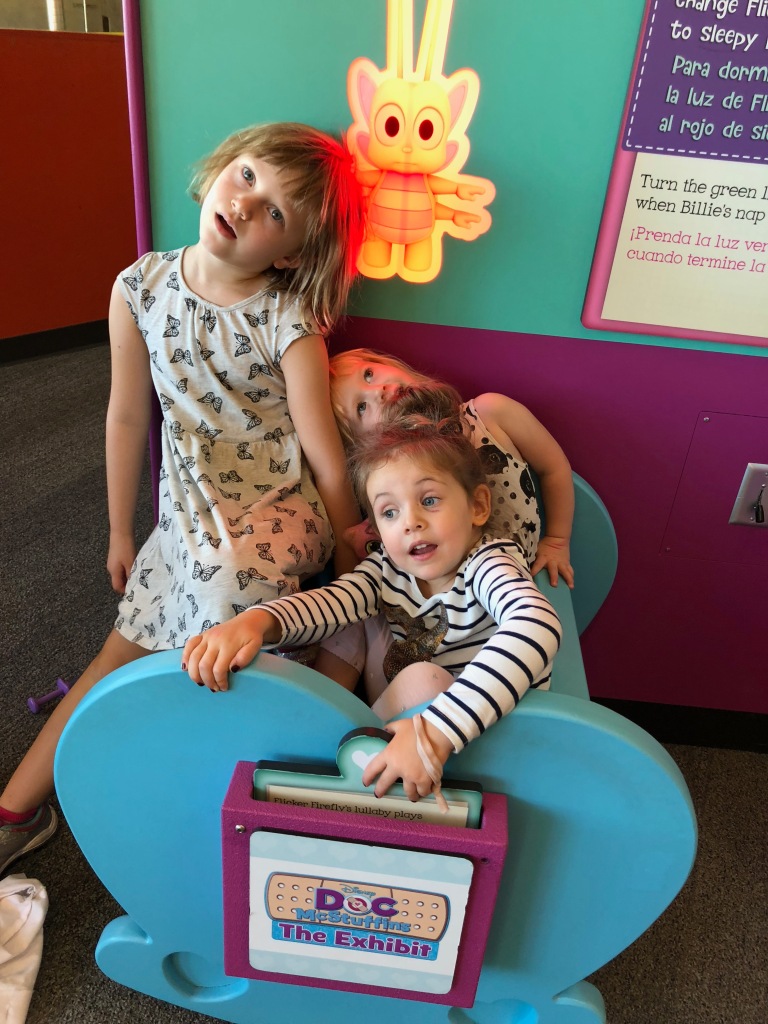 And now I’m cute kid picture caught up on the blog (I think). That said, another day, another cute picture of these kids, if you ask me. Who knows what will pop up next!