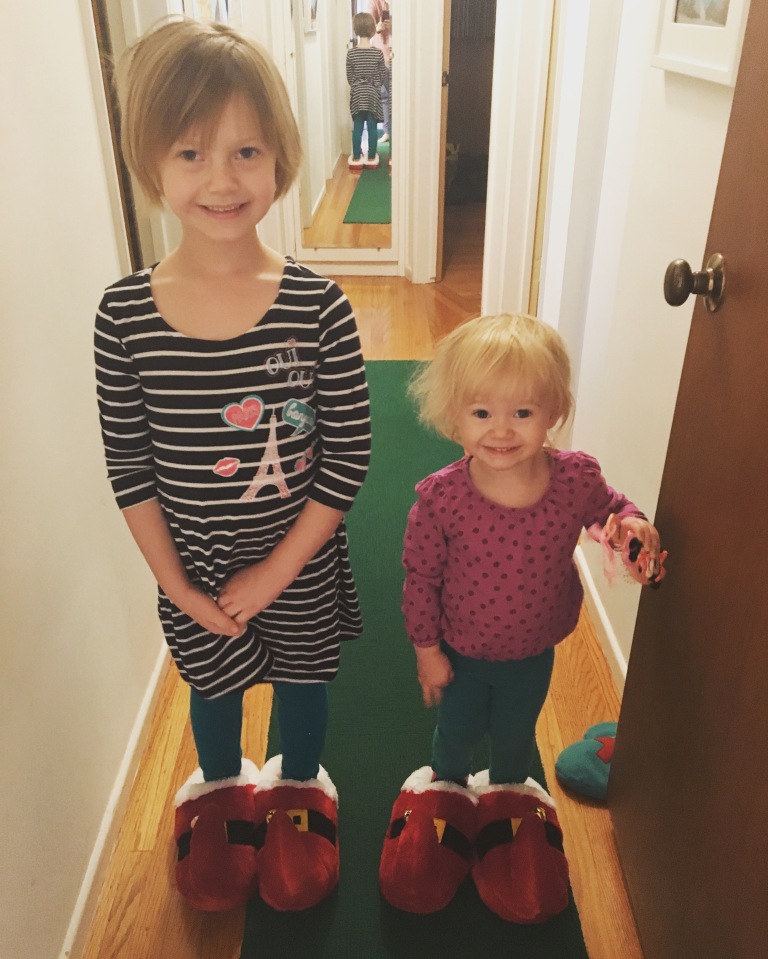 As you may remember, two years ago when Zoe was in preschool, her teacher shamed me into buying an Elf on the Shelf… We ready her story, named her (Sparkle Heart Gem – guess who came up with that?), then learned the hard way that the elf is WORK. Well, work for the parents at least.

I will say that two years later, that elf STILL works.

After 11 days away from my children, I again succumbed to GUILT, and the first night I got home, we pulled out the elf, and she began her 2016 Christmas journey.

On the first morning, Zoe was THRILLED to see her friend Sparkle Heart Gem. Unprompted, she explained to Ella how the elf would be hanging out with us until Christmas, watching, and would report back to Santa. And if that report was bad, she’d get nothing for Christmas. Eyebrows raised.

On day two, I immediately failed to move her… I mean, she forgot to move, of course. Zoe woke in her teenager “I just got woken up against my will” haze and instantly said, “Mom, why didn’t the elf move?!”

Dammit. Thinking quickly I said, “She must be mad at me because I made fun of her dress yesterday.” (yes, we bought her a silver sparkly dress, appropriately called a “Dazzling Dress” – suckers.) I looked right up at Sparkle, apologized, assured her I liked her dress and encouraged her to move the following day. Because of course, she doesn’t hold a grudge (come on, she’s a Christmas elf), she complied.

In the 14 days since I have been home, That Darn Elf has failed to relocate herself 5 times. She has also oddly relocated herself in the middle of a day – or an even an evening right after dinner, often after a small child named Zoe noticed that she had NOT moved when she was supposed to… EVERY TIME, Zoe gets excited that she has moved. Every morning, she scours the room to find the elf and giggles as she points out where Sparkle has moved.

And so, I guess if you have naughty children, get That Darn Elf. But if you don’t, unless you’re  looking for punishment or you’re hopelessly bored, DO NOT fall for the elf.

Don’t say I didn’t warn you.