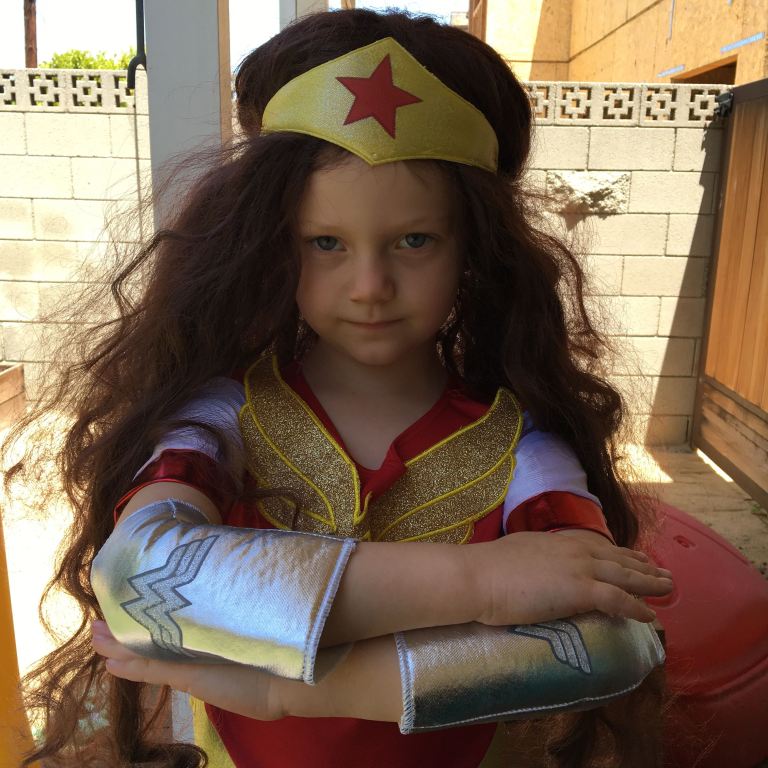 Let’s start at the beginning. We have yet to develop and stick to a good reward system for Zoe, though many months ago we were going to try a “ticket” system – I even bought the pink tickets with stars on Amazon and talked about it with her.

But as with most things, life got in the way, and this system (like the Chore Chart, the weekly reward stickers, and others) fell to the wayside.

About a month ago, I was determined to pick it up again, we got into a groove on how to get tickets, and Zoe had her first reward for 50 tickets: a Hello Kitty tennis racket (which actually ended up being a Dora tennis racket when it was time to buy it). Regardless, we hit a groove, and the reward worked to make her want MORE tickets.

Twice when I traveled, we were able to set goals around tickets and rewards, and the second time, Zoe decided she wanted a Wonder Woman costume. I think she was at Target with Dad when she first saw it, and he was clever enough to say “Well, for 50 tickets…” and order it online, so he’d be sure to have it when it happened.

Clearly, she earned her 50 tickets (as evidenced by the photo above).

I returned home for her to earn her costume, which she went into the other room to put on, immediately. She came back in with a really cute top, silver cuffs, a gold headband, and NO PANTS… Oops? This costume had no bottom. Thankfully, I was prepared.

I myself had once been Wonder Woman: 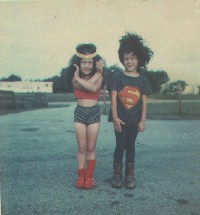 Not one thing on my body was an actual “costume” (we had no money), so I knew we could improvise. I pulled out some navy shorts, grabbed a matted wig from my college days (which my mother must have also done), and talked her into putting on her black boots.

As soon as she was “dressed”, I had to take pictures. Actually, first I showed her the picture above (which she did not believe was me). Then we went outside for photos. I tried to get her to replicate my awesome Wonder Woman stance (deflecting bullets with my bracelets) – though she doesn’t actually KNOW Wonder Woman like I did as a child. That one looked like this: 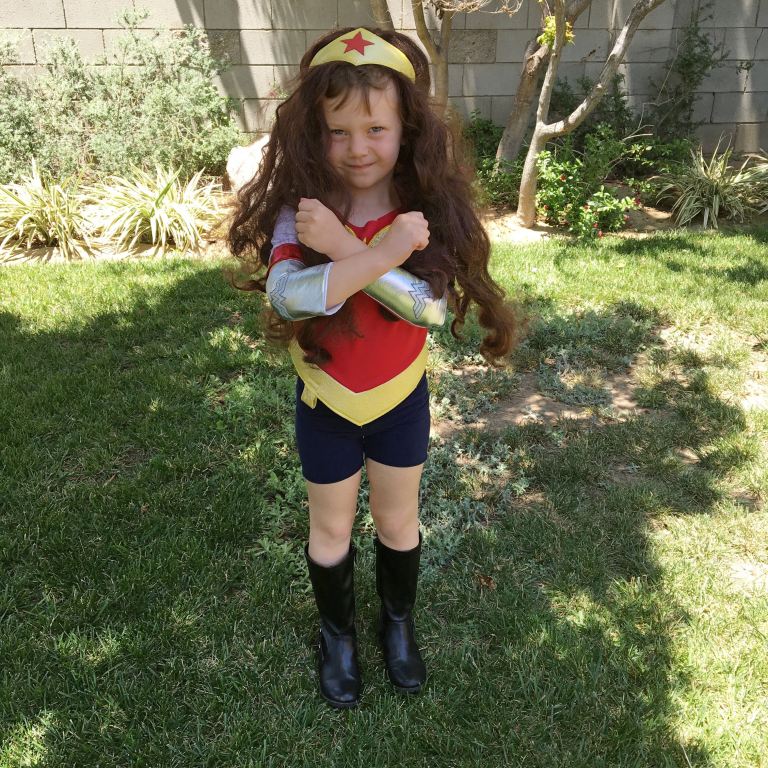 On her own, she enhanced that stance with one of her own: 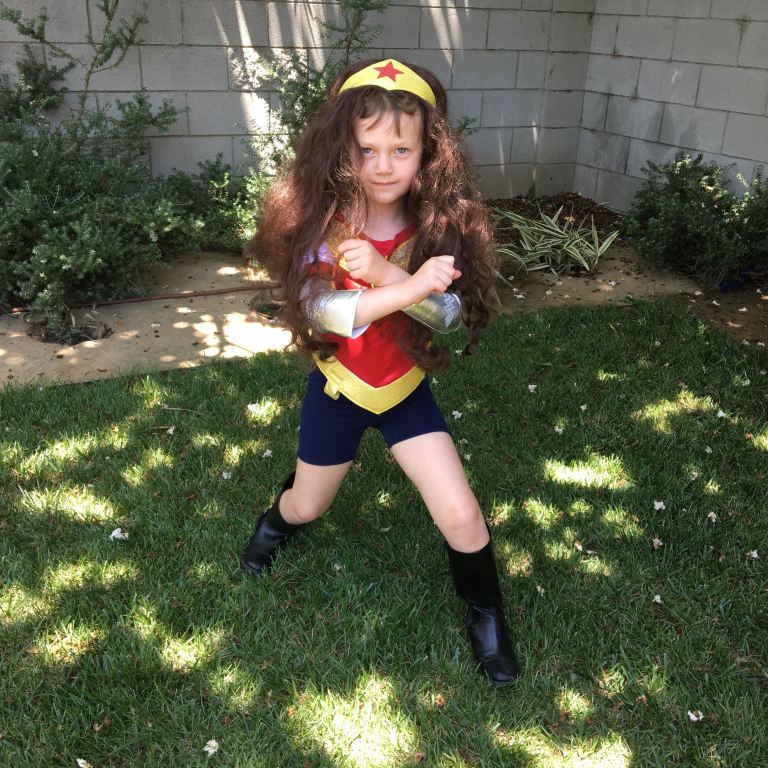 Her Wonder Woman is much tougher than mine. Then I talked her into going for a ride in her invisible plane: 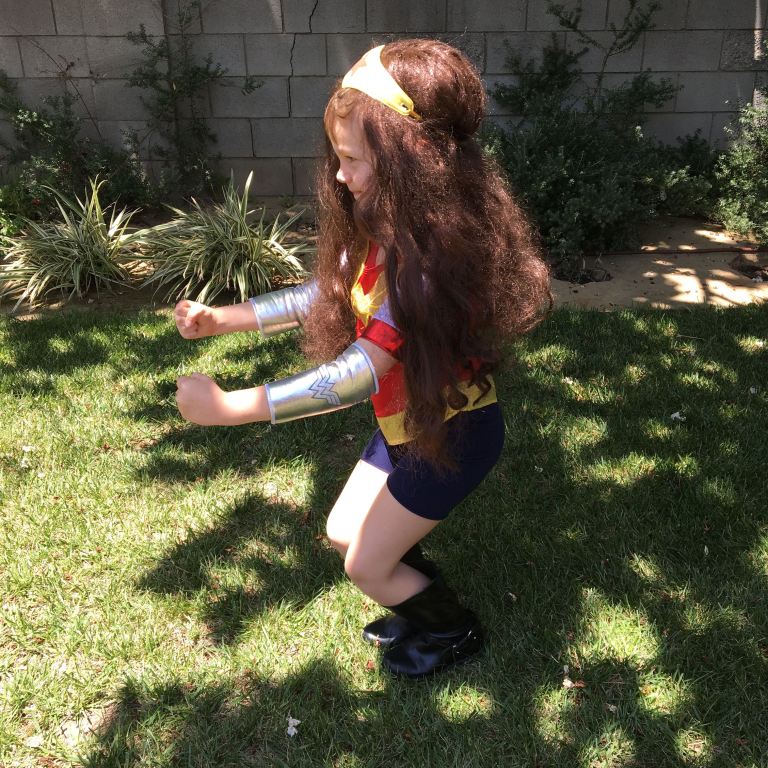 Which made me giggle. Then I decided that reliving my own childhood might be a little more about me than her, and I stopped talking her into things.

I took a seat on the back deck and starting flipping through the photos we had, when she came over to me and said, “Mom. Take a picture of this.” And THAT is how we got the photo above (worth showing again here), with the best Wonder Woman ever:

Now THAT is Wonder Woman.

And knowing what I know of this incredible child, I’m pretty sure this is simply foreshadowing for a future of wonder and strength that she’s had since birth. And now, if nothing else, she’ll have these pictures to look back on (at her wedding or prom night or whatever). You’re welcome, Zoe :)

Now, about those tickets (which have again fallen to the wayside)… Who knows what they’ll turn up next!