Ok so first, a confession. In high school, I was in a beauty pageant. Yes, a BEAUTY pageant. My best friend, Erika talked me into it (as she would later talk me into sorority rush), but I take full responsibility for my lack of judgment.

Now, if you ask Junior Miss (now called Distinguished Young Women), they’ll say it’s a scholarship and talent program (in fact, they don’t even call it a pageant anymore nor mention beauty). But I lived it. And I don’t think there’s much scholarship or talent in a ball gown competition (and yes, I wore a ball gown – and it was pink).

In their defense, there WAS a talent section of the show (in addition to a group dance everyone had to learn and perform as a team to Gloria Estefan’s Conga – in white short shorts and a red Junior Miss t-shirt, with those shiny tights and a LOT of makeup). You know, stage makeup. And for my talent, I played Lionel Richie’s Endless Love on the piano with a slideshow playing in the background following a family (ironically, not mine) from youth to marriage to childbirth to old age. Very touching.

Anyway, why am I telling you this? Because in that very ball gown portion of the competition there was ONE contestant who COULD NOT STAND STILL. In fact, there was video of this event (we can’t find it now, and I’m honestly disappointed) where I am the ONLY one moving, and literally talking to the girl on my left, when we’re supposed to be standing still and smiling like Beauty Queens. True Story.

As you may have guessed, I did not win. HOWEVER, I did win a “Scholastic Achievement” award (which I think is equivalent to “she may not be beautiful or talented, but at least she’s smart!). So now me, Diane Sawyer and Debra Messing finally have something in common – except, they won ;)

And now, the point: My Daughter Cannot Stand Still (nor follow direction).

Sure, she’s only 3 and a half. But she’s been taking dance classes as an extension course in the afternoons at school AND one day a week at a dance studio for almost a year. I think the “taking direction” part isn’t sinking in yet… Thankfully, she’s super cute and smart – and she loves pink dresses.

We just attended Zoe’s recital at school, the culmination of 8 weeks of practice, and here’s how that went:

See? SUPER cute – look at that pink tutu! But we’ve got some work to do before she’s pageant ready ;) 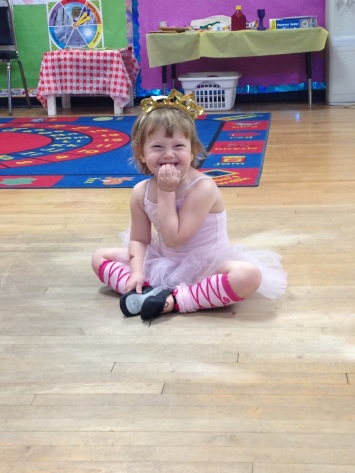