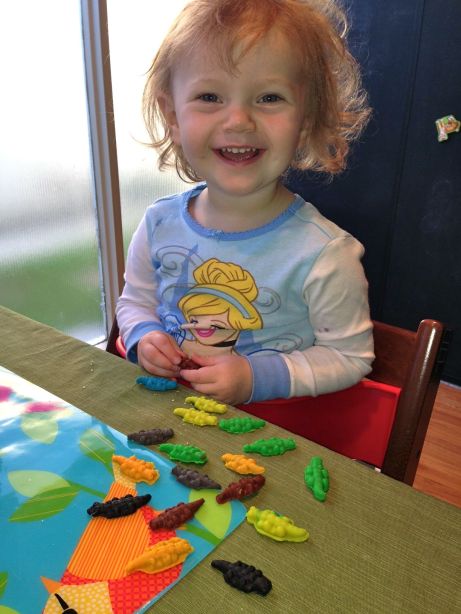 We’re not the craftiest parents you’ll meet (in an artsy-craftsy way). And while my husband can cook pretty much anything, I’m lucky when I follow a good recipe without skipping an ingredient and it works out.

But now that Zoe’s getting a little older and much more engaged with her surroundings (read: in need of stimulation non-stop), we’ve been trying to make an effort to encourage her crafty side vs. her iPad side, which is well-developed I assure you. She got a cute little Play-doh kit for her birthday which she was quite excited about, so for Christmas, Play-Doh made the list (a few times, in fact).

She now has a Play-Doh Mega Fun Factory with conveyor belt, and about 42 cans of Play-doh. AND our friend Edna, who owns her own daycare, gave her a Play-Doh Creativity Center. It’s awesome. And in that creativity center is a two-sided mold, shaped like a crocodile that with one side you can make tiny crocodiles. Ask me how many tiny crocodiles we have made.

Ask me if those crocodiles go with us on trips. If they are smashed in the cup holder of Zoe’s car seat. If they are smushed into the bottom of my shoes, into the playmat, and scattered in tiny rainbow bits all around our house. Ask what happens when these crocodiles stay out all night. I’ll tell you, they turn into unsmushable tiny crocodiles and mommy thinks she won’t have to make new crocodiles anymore since we now have “real” ones! Not so.

In fact, we can’t even use the “old” crocodiles from the previous day that actually made it back into the play-doh cans. Those have to be squished and created all over again, repeatedly. We’ve even had to get crafty and figure out how to make bigger “mommy and daddy” crocodiles. We also get to call them cocodrilos, since that’s what Diego calls them, and as Zoe tells us, “that’s Spanish”.

I just paused writing this post to take a picture of Zoe with a crocodile and found that 18 crocodiles were left out to dry last night… Looks like there will be a lot of crocodile making and remaking for us today. In the meantime, looks like the crocodiles are going on a choo-choo train:

Maybe one day soon, we might just become the craftiest parents you know, thanks to Zoe. Stay tuned.