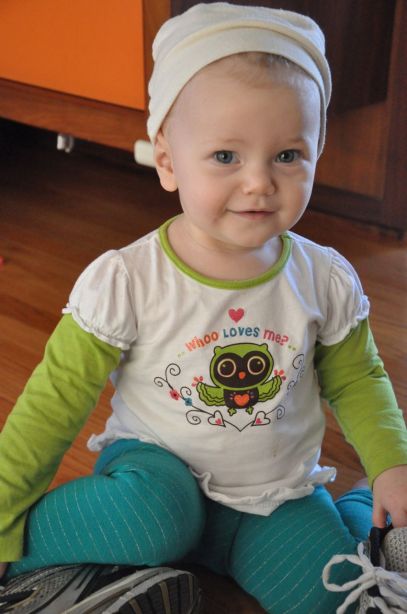 There’s no better way to describe it.

I was at a super fun baby shower for a dear friend last weekend, and there was a moment when she was surrounded by three of us “recent mothers” who were vividly trying to explain what to expect at the birth. Is that cruel or what? Even though I temper any advice with, “Whatever you do will be the right thing – you’ll just know“, that’s just a lame attempt at admitting “I have no idea what I’m doing, so don’t actually listen to me.”

Same goes for every stage from pregnancy on. As we near the discipline stage, it’s painfully obvious who’s in charge (hint: it’s not us) and how tough achieving a balance of power is going to be. Especially when she’s really cute. Oh, and smart. Our attempts at creating a polite child by teaching and reinforcing the use of “please” have already backfired. She now asks for things she clearly shouldn’t have, adding an emphatic and desperate “pleeeeeeeeese”. Insert “mommy” or “daddy” after that and we’re done for. Come on, she’s 19 months old!!!

While she’s not had her first time-out yet, it’s coming. The look in her eye when she stands up on the sofa AFTER we’ve asked her to sit down is frightening. First, she’s SMILING, with a twinkle in her eye. Second, it’s obvious she knows exactly what she’s doing AND that we don’t want her doing it. And last, she’s clearly testing to see how to best get her way. WHY COULDN’T SHE HAVE BEEN MORE LIKE BART?!! I am doomed.

Discipline is just part of this “different” world. Spend a Friday night exhausted on that sofa watching a recorded American Idol (from 2 weeks ago), glancing over at the video monitor alternately hoping she stays asleep and thinking how cute she is and see how THAT feels. Come home from work after a ROUGH day to your daughter crying crocodile tears at the front door because she doesn’t want to put away the mop she’s been playing with so she can go outside (a daughter-daddy battle to the death). That’s “different”.

Spend dinner across from a messy eater who rapid-fire, in no particular order shows you every sign she’s learned from Baby Signing Time in between bites (and that’s a LOT of signs). Try explaining to a small child who REALLY MUST have you in the room while she watches the same Mickey Mouse Clubhouse episode she’s seen 7 times that you’ll be right there but have to go potty (while you’re ON the potty). I have no idea how my wonderful mother (as a single mom with twins) survived us. I love my sister to death, but imagine two of us with DIFFERENT wants and needs at once. I can’t. I would not survive. When I say this to my mother, she says, “Sure you would. You just DO.” And boy do you DO. A lot. Repeatedly. With no instruction manual (or lots of instruction, much of which doesn’t actually work with any consistency).

So. It’s a joy to watch our daughter learn. She’s incredibly sweet and loving and social and a good kid – and I wouldn’t trade her for anything. But it’s 100% true that you have NO IDEA what it’s like having a child until you, well, DO. And it’s different. Every. Single. Day.