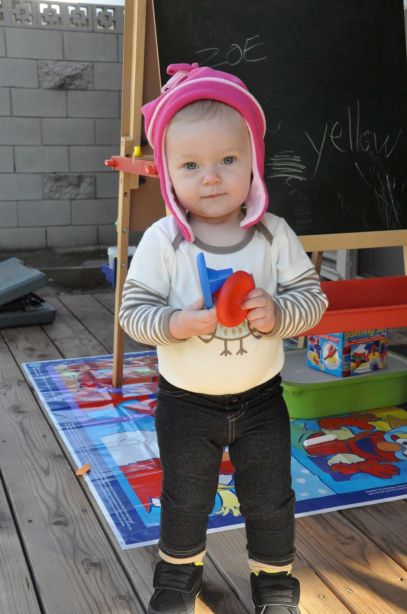 Though officially Zoe’s 2nd New Year celebration, I’m pretty sure this one will be just as fuzzy a memory as the first ;)

Last year, she was basically feeding every 3 hours and sleeping in between, so while she was up more times during the night last year, the whole experience was quite uneventful. Not that this year was particularly “eventful”.

Just before dinner (which was not long before bedtime), Zoe and I watched some Mickey Mouse Clubhouse – who WASN’T doing that on New Year’s Eve?! Minnie kicked Pluto’s ball ALL THE WAY TO THE MOON! So they had to find a way to get to the moon, which they DID, and there they found Pete and Chip ‘n’ Dale, who are not normally on the moon but for some reason no one was surprised (other than me). Regardless, they got the ball back. Phew.

Then after Zoe’s annual bath (kidding), baba and night-night, her father and I stayed up and rang in the new year. Well, the East Coast one at least. We DID see the ball drop, in NY, on TV. That’s something.

And that must explain why we’re all tuckered out today. No wait, I think that’s the 80 degree weather. What a way to start the new year!

Zoe’s entry to this new year, weather aside, has been a little rocky. Just 2 days after the ER episode we ended up at my sister’s pediatrician to check out some ear tugging and a fever, which turned out to be the beginning of her first ever ear infection. So this is day 6 of twice-a-day sickeningly sweet (no, I didn’t taste it) pink antibiotics and ibuprofen. Yes, I’m aware how ironic that is after my medicine-hating post. Oh, and just before heading to the pediatrician, we noticed she had snuck in TWO new bottom teeth – her First Molars! Which could also explain some of the poor sleep.

And that’s the news from Zoeville on this fine New Year’s Day. All generally off to a good start for 2012! I’ve got a couple of backlog videos I hope to post over the next few days, so stay tuned, and here’s to an awesome year!