First of all, I’m sure you can appreciate how difficult it is to get the small child AND the zoo animal in the same photo. Even MORE difficult to capture the glee on the small child’s face when she figures out there’s an animal that she’s only seen in a book actually moving around in front of her (or in the case of the lion, lying down doing nothing was enough to elicit quite a squeal).

Thankfully, there’s no “petting zoo” for Tigers (though I secretly always wanted to pet one), but they DID have a chunk of tiger pelt for the kids to touch, which I find morbid… They also had the skull of a polar bear in the viewing room with the actual polar bears, which I also find morbid. I enjoyed watching the zookeeper (read: high school student manning the zoo desk at the polar bears for the summer) explain to a small child what it was and WHY it wasn’t IN the polar bear any more.

Being a parent just points out how much you, as an adult, failed to retain from childhood. I’m sure I KNOW things. I must? I was a straight-A student all the way through high school (except for the 89 I got in BSCS, which I vehemently fought to change to no avail), so what could I possibly have missed? I blame the introduction of alcohol in college for attacking the brain cells holding the very knowledge (previously considered useless) that I will now need as our child questions every single thing around her. Of course, I guess I have a little time to brush up on “every single thing”, since she can’t even talk yet, right? What am I waiting for!?

Anyway, I did find out that a polar bear’s hair is hollow, providing efficient waterproofing and insulation. That’s a start. Again, Zoe didn’t ask one single question though, so for now, we’re off the hook. I think a monthly trip to the zoo is in order so we can learn everything and “teach” it to her once she’s old enough to ask ;) If you’ve got any other great ideas, let us know! 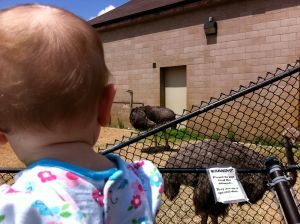