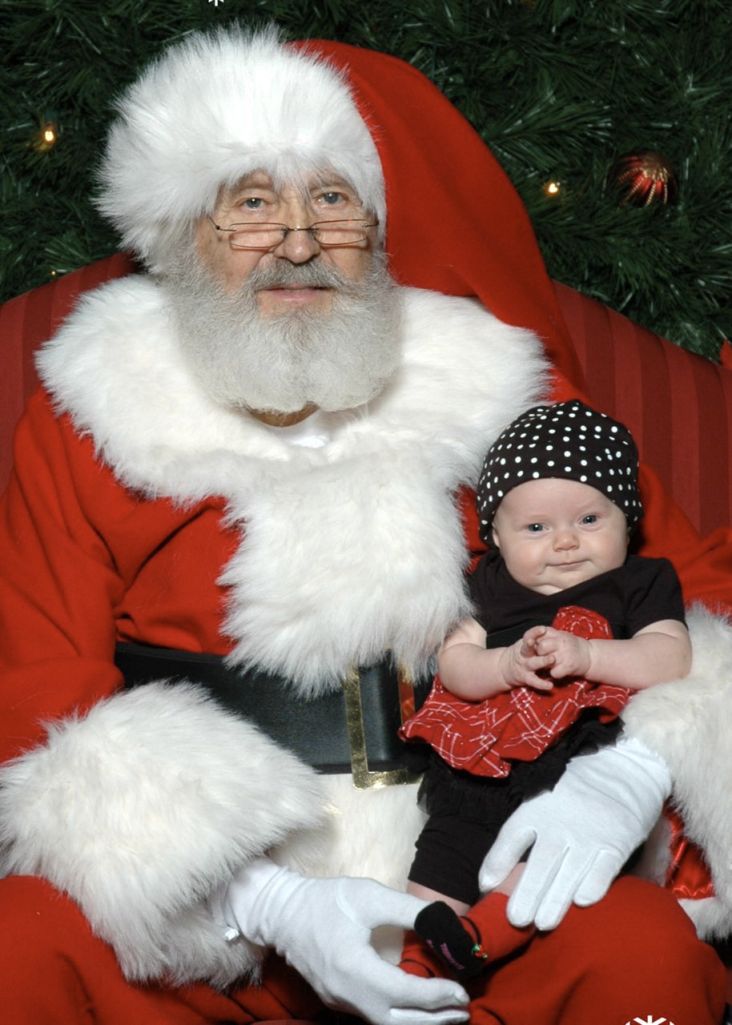 Oh yes, we are THOSE parents. And not only did we (and by “we”, I mean “me”) obsess over what Zoe should be wearing in her first Santa photo ever, but I forced my sweet friend, Tara, to obsess with me. Sure, she was only visiting for the weekend and had flown all the way from GA, leaving her own two beautiful children with family to come out and meet Zoe. Yep -that’s a really great friend ;)

Anyway, we ended up with TWO hats (see below), and a pair of shoes that was too big for her to keep on her feet yet (oops). Then, while we were shop shop shopping for what to put on her, we MISSED the Santa at the first mall. Yes, I said “first” mall.

So the following day, we were (almost) the first folks in line for Santa – he’s pretty popular, as it turns out. Good news about not being first is that we got to watch other kids have their turn with Santa, which was on the whole uneventful. The show was really the crazy photographer, who couldn’t have been more than 18 years old, and there’s not a chance she’d even spent TIME with children. Her method for getting smiles was to yell “Smile!” (no joke) – often asking the parents an actual name to yell – and bang a toy on the table in front of her to create noise. Seriously, that would have been scarier than Santa to me as a child, but hey, it’s amazing what parents will put up with for a picture with the Jolly guy.

Speaking of which (and I’ve polled a few other parents on this), I’m afraid Santa may have lost his Jolly. Our Santa barely acknowledged the kids sitting on his lap – it was really the parents who were prodding their children to tell Santa their Christmas wish. I couldn’t help picturing the Santa from A Christmas Story with his boot in Ralphie’s face, shoving him down the slide with a snarky “HO, HO, HO”…

In fact, though our 3-month-old can pull off a smile, as you can see above, Santa was not so joyous. I suppose I can’t blame him – it must be a rough job having kids sit on your lap and cry or pee or yell toys at you – but seriously, ’tis the season, mister – buck up! If not for the kids, do it for the parents who are about to pay way too much to have an obligatory photo of their child with Santa (and yes, we had to buy TWO packages because I loved the photo of her in that crazy too-big red beret, though I think I made the right choice).

Anyway, it’s done. Christmas with Santa, check. Christmas tree, check. Presents under tree, check. We even have our very own angel. And as if it couldn’t get any better, RED CLOTHES EVERYWHERE! Unlike the rest of the year, when the popular little-girl color is pink pink pink, Christmas is the time to stock up on red, which, in case you don’t remember, is Zoe’s signature color ;)

So we’re (mostly) ready for Christmas next week (NEXT WEEK?!), and hope YOUR Holiday Season is off to a great start! 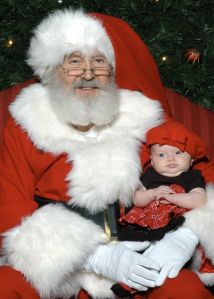