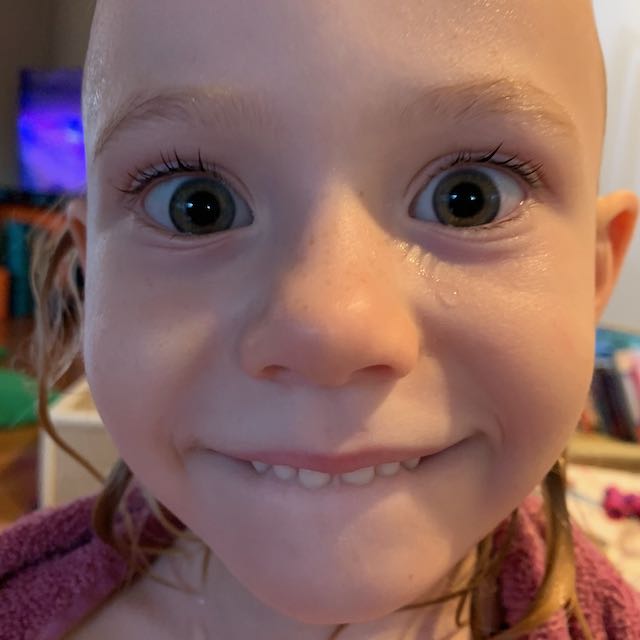 Last week Summer Camp fell off the rails. Zoe sort of enjoyed her Adventure Book Club, which turned out to be someone reading part of book aloud to the group then asking questions. The book was Thunder Dog: The True Story of a Blind Man, His Guide Dog, and the Triumph of Trust at Ground Zero. A little light reading. She’s still enjoying her Metrocraft weekly class, where the students have now built their own business plans (and Minecraft businesses) and are working on city rules – and next week, designing their own flag!

Ella didn’t like ANY of her online classes, but we signed her up for an “Under the Sea Jazz Dance” class with her friend, which she did like! Mostly because she could “see” her friend, but still. It’s unclear exactly what she did during the day most days last week. Work has gotten super busy, though she did spend a lot of time on Khan Academy kids (she gets beads for that), and her Nina time turned into a Zoom call where they use the Epic app for books. A technology advancement with lots of book options! She’s also spent a ton of time in a LEGO world of her own, completely content to build people and structures and script full conversations and scenarios.

One thing I’ve noticed is that I’m taking fewer pictures than when this all started, though as I write about these weeks, I know we’ve had many photo-worthy moments. For example, this week Zoe lost a tooth! Yes, she’s almost 10 and wears braces. Exciting, right? Unless you’re the Tooth Fairy.

You likely remember how many times we’ve messed up in this role. I’m beginning to think we’re just not tooth fairy material. Too bad our kids have many, many teeth left to lose between them. Anyway, here’s how we screwed up this time. Zoe excitedly shared that she had lost her tooth! Then we forgot about it.

At 3:38 am, I woke up panicking because I wasn’t sure if SHE had remembered or not. I started to sneak into her room, but it was so dark and quiet. Thankfully, I woke my husband (oops), explained what was happening, and told him I’d decided to tell her it was a good thing the tooth fairy didn’t come, since I had suggested she leave a note asking for “a little extra” to go towards her American Girl doll savings. I was certain she hadn’t done that.

When she woke the next day, she didn’t say a word about it, so I snuck into her room and searched for the tooth. Nothing. PHEW. A few minutes later I cavalierly asked her if the Tooth Fairy had come. Her eyes lit up as she said, “Oh, I forgot to check!” and got up to head to her room… Uh oh.

She returned with a disappointed look on her face. Thankfully, she had also forgotten, but then remembered in the middle of the night, wrapped it in a tissue, and shoved it under her (white pillowcase covered) pillow. I missed it.

Without missing a beat, I said, “Oh! There’s no way she could have found that! Did you leave her that note?” Nope. She very excitedly sat down immediately to write. The next night, I did not forget, and the Tooth Fairy left her TEN dollars!! She was ecstatic. Between this bounty and the beads she has earned, she’s saved over $115! That kid can really focus when she wants something. Ella? Not so much. I dread the day those dolls show up and she hasn’t earned enough to open hers… There’s a lesson in that.

In other news, I got a wild sewing hair one night this week and decided to remove the sleeves from a red dress I like and sew up a new sleeveless option. I ripped out the seams (not fun) and was committed. Mission accomplished.

On Saturday morning we hosted our friends, Holly and Panda, and their cutie pie daughter for a socially distanced backyard brunch. The girls had a blast together, one of only three “live kids” experiences they’ve had since March. Zoe’s Nail Salon was a huge hit, and there was a glitter-tastrophe, as all good little girl parties should have:

It was a bittersweet event, as our friends are moving to Oregon for work. Though we will miss them dearly, we’re very happy for them. And let’s be honest, if things continue as they’re going right now, we’ll barely see them (or anyone else) for months.

Speaking of which, on Thursday night Zoe said, “Mom, I know it’s silly, but I’d really like to go back-to-school shopping“. I said that’s not silly at ALL, and the girls searched Target.com for new backpacks, lunch boxes, pencil packs, notebooks and water bottles. They are thrilled. We even decided to make “going to school” a thing, where they keep their packed backpacks out in the living room, then “go to school” in the morning (lunch included) and return those backpacks at the end of the day. I hope that works.

I have no idea how well this remote schooling will go. From what the school district is saying, they’re going to try and make it as JUST LIKE SCHOOL as possible. But let’s be honest. Virtual interactions are NOT the same. I’m thankful to have smart kids, but I can only imagine their distraction levels when face-to-face with friends for the first time in months… Plus, they’re tech savvy. A teacher’s nightmare. We shall see.

To round out another Coronavirus weekend, we made a quick trip to Micheals for some guilt-ridden parent craft supplies, complete with an escalator ride (don’t judge – we don’t get out much anymore):

That’s their superhero “I’m Flying!” look. On another fun note, on Saturday night I was sitting in the living room crocheting (not a typo), when Ella came over after her shower, naked and sat down at our tiny kids’ table. Without a word, she got to work and wrote a book. A very Ella kind of book. 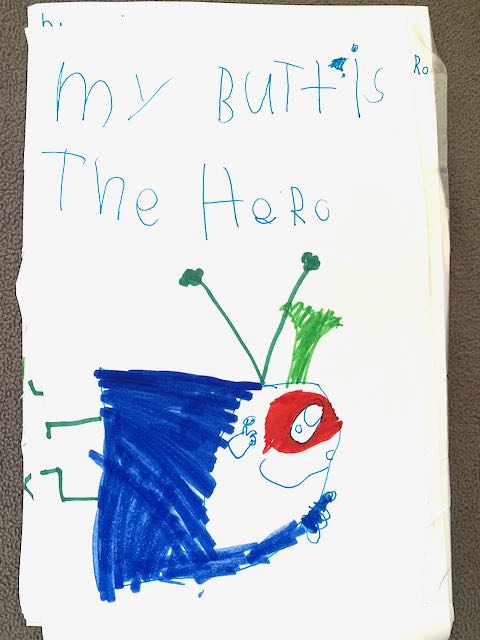 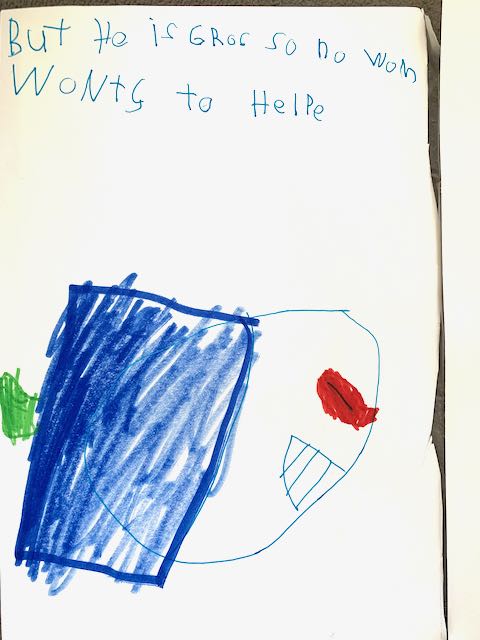 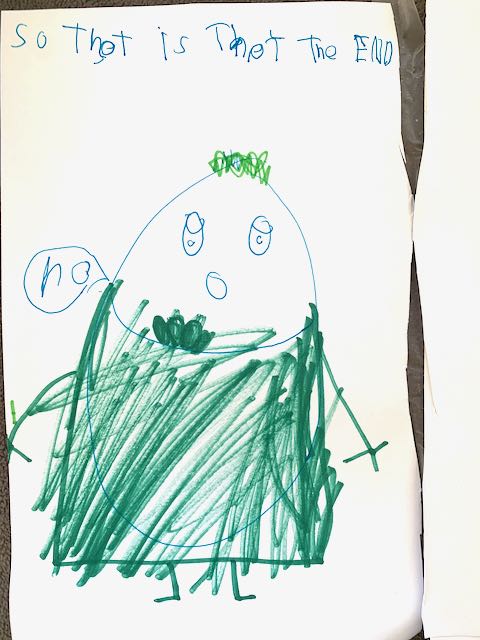 Next week I’m hosting a roundtable on The Unintended Consequences of Remote Work. I think there are going to be some interesting studies done when all this has reached a new normal about what happens to kids when they don’t have other kids to learn from (sisters don’t count). I’m pretty sure Ella will make a thought-provoking participant.

It’s the little things. One day I want to write about all the GOOD and the NOT-SO-GOOD things that have come out of this pandemic, in our experience. There ARE good things, no doubt. For example, I’m 92% sure there’s no way I would have owned a sewing machine otherwise. And sure, unlike some of my friends who are cranking out healthy habits, I’ve indulged in BAD ones. But tomorrow is another day. May we all have the presence of mind to see BOTH the good and the bad, and do our best to make some positive choices.

Take care of yourselves out there. I hope one day this time period is a distant blip on the radar for us all. Stay safe!