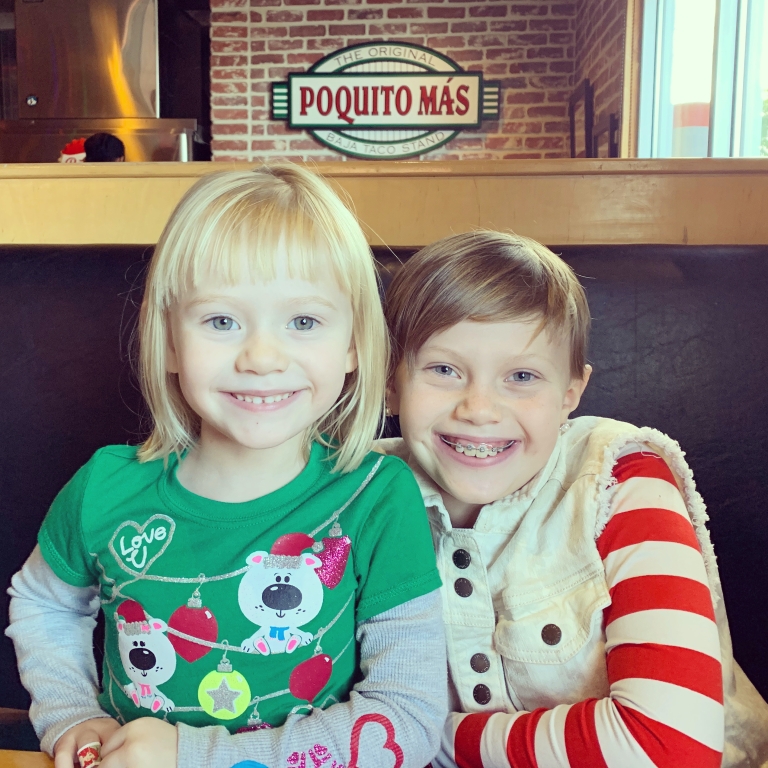 Feels like many months ago, but it wasn’t SO long ago, right?

We had a wonderful Christmas this year, filled with performances and presents and pretty girls, oh my! But first, Ella learned a little bit about product placement during a shopping trip to Target. While this picture is super cute: 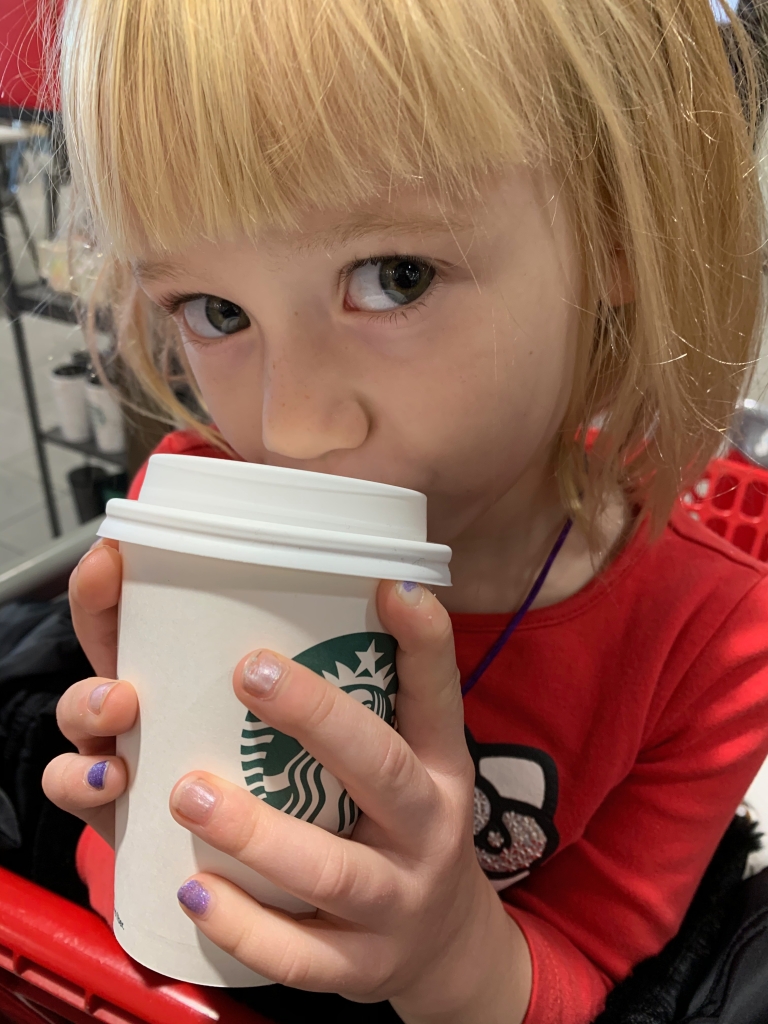 Starbucks would be much less likely to be excited about the product placement (logo covered!) than this one, right?

A few notes of interest for the very observant: a) yes, I cut those bangs, b) yes, she needs a manicure, and c) yes, we bought that hat. And now you know.

In early December we decorated that 8-foot tree (nice pick, Ella!), and if you look closely at the center of this picture, you’ll see the spot that Ella could reach the best on her “I’m too lazy to move this” stool.

And we welcomed back our annual spy: The Elf on the Shelf. In case you missed the original story, this elf (Sparkle Heart Gem) is now 5 years old, if you can believe it, and still tortures us every year with the need to “relocate” every night. And before you ask, YES, these children wake every morning between her arrival and her departure looking to see where she moved…

And then, the performances began. Up first: A LIVE ACTION musical version of Frozen at the Pantages theater, which was fantastic! It was also a great chance to dress up and go out to dinner, which all the girls enjoyed. Below is a picture taken by a stranger, which is not something I normally do. In  fact, I ALWAYS pretend I’m going to walk off with someone’s phone when strangers ask me to take their picture, just to make them remember to be mindful. You’re welcome, strangers. 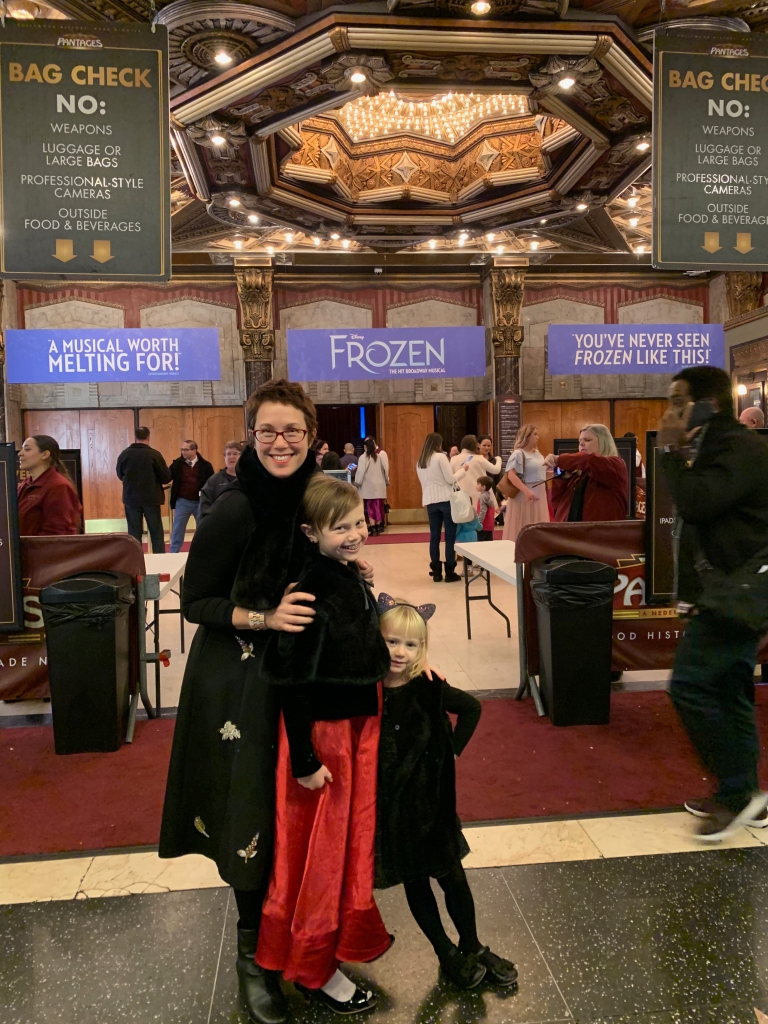 In addition to THIS performance, Zoe had a performance of her own – her first ever singing to a crowd of strangers (around 80 people). She’s been taking vocal lessons at a small local “fine arts” school, and this is the first concert she was chosen to perform at (not all students get selected). She had a solo AND was part of a trio.

When we arrived, we all realized we knew NO ONE. The lessons are private, so we drop her off, pick her up, and rarely interact with others. We were referred to the school by a schoolmate, who did end up being there, but other than that… We also brought our friends, Holly, Alex and Addie to round out our private cheering section, but still.

As people started arriving, I went up to sit with Zoe for a bit in the student section. She looked a little nervous. She had reviewed the program and pointed out a few things: 1) she was one of TWO solo vocalists, 2) most of the students were playing traditional or classical pieces on piano or violin, and 3) she felt very “different” from everyone there. We were in a church, which was so pretty, and the school has a strong Armenian population, both students and teachers, most of whom seemed to know one another.

Mommy pep talk time. I reminded her how COOL it was to be different. That once people heard “more of the same”, her beautiful song choice and voice would break the trend and they would love it. I also reminded her that all she had to do was take a deep breath and do her best – she’d already done the work, and her body knew what to do. Just be there and let it out. She nodded.

I will NOT take credit for what followed, and as a mother, I am completely biased, but my heart “grew 3 sizes that day” as our little girl showed what bravery looks like – and crushed it.

Afterwards all those “strangers” were coming up to her (and me) saying how amazing her performance was  – she was beaming.

Two behind the scenes notes:

Another performance we enjoyed had Neil Patrick Harris in it as the “magic mirror” in an offbeat and modernized production A Snow White Christmas. Snow White was played by Olivia Sanabia, who is “Kelly” in Just Add Magic – an Amazon show our friend Tim’s daughter Abby stars in, and if you haven’t seen it, you should.

The evil stepmother was played by Michelle Williams, who was a member of R&B girl group Destiny’s Child, one of the best-selling female groups of all time. They encourage audience participation (boo, cheer, warn the actor, etc, so it’s great for families. 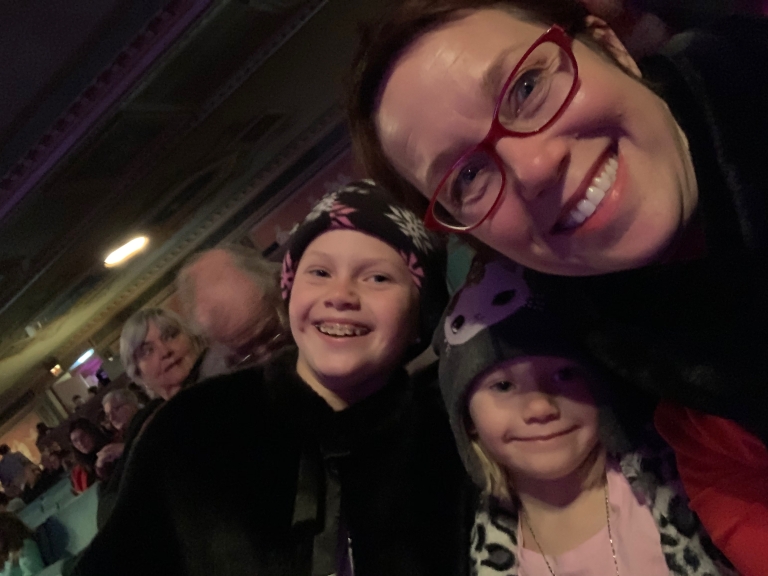 We also went to see STAR WARS on OPENING NIGHT! Something else I do not do, but it was worth it. Here’s a picture of our fierce Jedis after the movie:

Insert our annual tradition of the girls counting Christmas lights from the car, wherever we go, and a Wonderful Christmas was had by all.

I’ll wrap with a couple of just for fun videos we created on JibJab that I hope you enjoy as much as we did. We sat on the sofa and made over a dozen, texting them to friends and family and laughing for 2 hours. Merry Christmas!

Oh, and here’s a tease for my next post about the NEW YEAR: