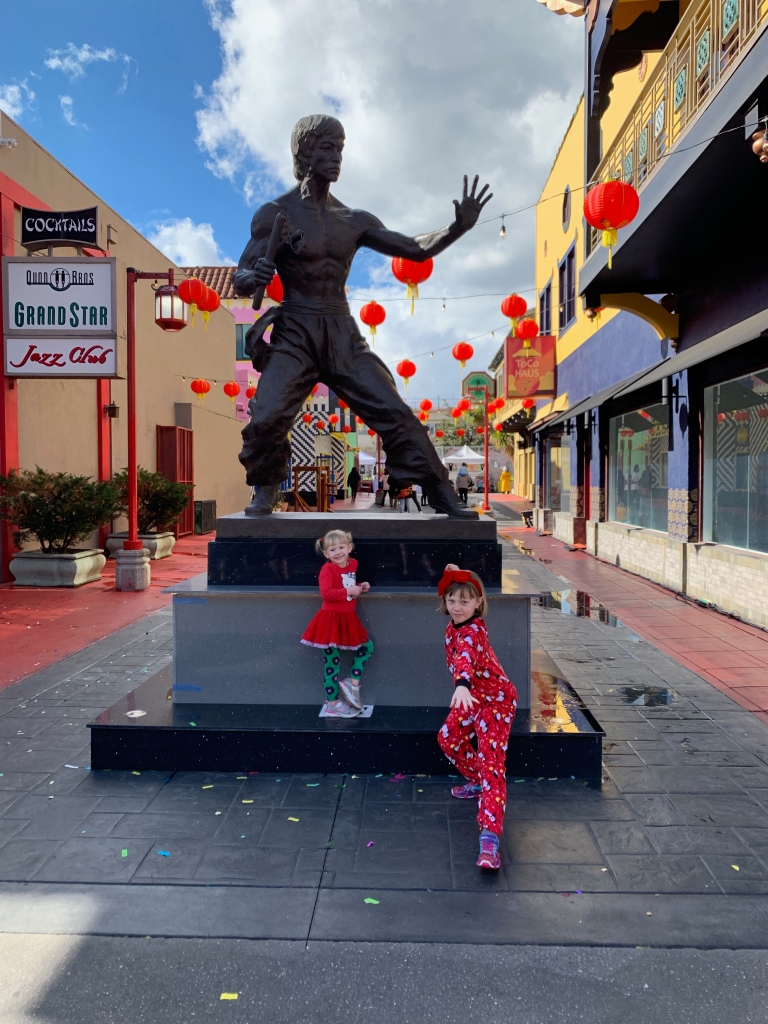 As I mentioned already, we attended the Rose Parade in January on New Year’s Day, and not to be outdone, the Chinese Lunar New Year offered us another chance for another big parade! The Golden Dragon Parade has been going on in downtown LA for 120 years (that’s not a typo), and again, though we’re basically Los Angelenos we’ve never been!

I’ve always wanted to see a Dragon Dance in Chinatown, but (like the Rose Parade) it’s seemed daunting to actually get there and deal with crowds (over 110,000 people attend). But remember, this year I’m saying YES (and in fact, this one was my idea).

This event did not disappoint. Though the parade was nowhere near as organized and grand as the Rose Parade, it was interesting to watch and even just wandering around Chinatown to see the celebrations going on all day (noon to 8 pm!) made it fun.

The girls had a blast watching all the colorful costumes and bands go by – even the parade goers often had interesting outfits to recognize the day. The best we could was dig up something RED from our closets. You’ll notice above that Zoe (who at first pulled out a burgundy shirt and peach sweatpants for the occasion as “the only red things she could find”) is wearing some red and gold pajamas. Ella is wearing a red Hello Kitty dress with green, blue and pink pants and purple socks. One day I need to blog about her choice in clothing – and the fact she will not allow anyone to pick out ANYTHING she wears…

But back to the celebration…

We shared dumplings, a steamed pork bao, and some Dragon’s Beard candy (also referred to as Chinese cotton candy, and I cannot recommend it…). That of course did not stop Ella from wanting ACTUAL cotton candy, which ended up everywhere. You never miss diapers until your kids stop wearing them, and you no longer have wipes on hand… 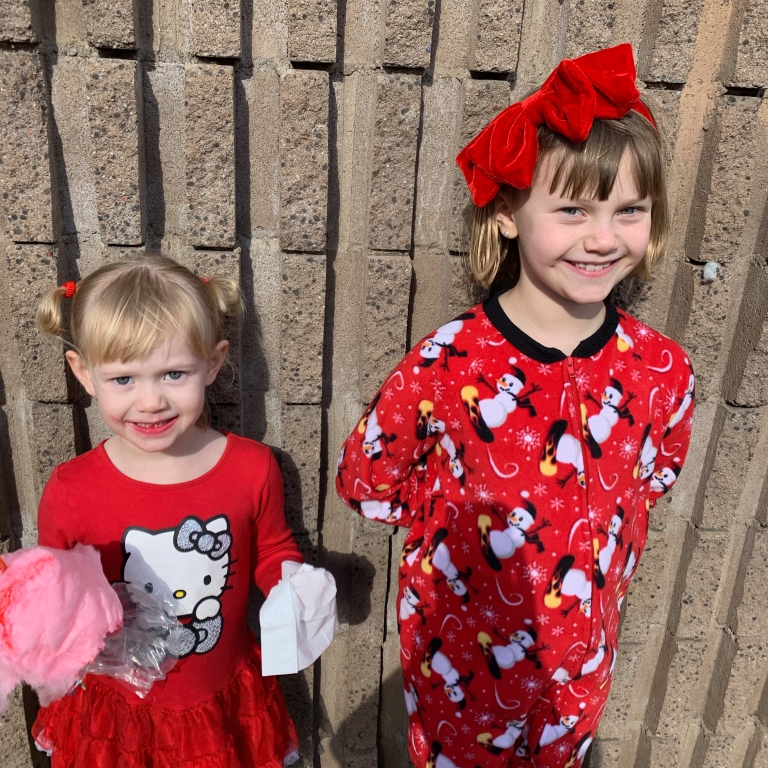 While Zoe was obsessed with the “poppers” (both the canned confetti ones and the tiny ones you throw on the ground that make a POP sound), Ella was obsessed with getting her hands on some cotton candy. Earlier on the street we were overrun with people selling it – along with anything else you’d think you might get at a parade on the street – but when we “needed” it, there was not one vendor to be found.

When we finally saw one, we had to chase him down through throngs of people, me carrying Ella and our $2.00 to finally catch him. On the bright side, because of this side adventure I was able to capture this video by literally chasing them through the crowd:

Before we leave the food topic, here are some other FOOD photos to enjoy. First is Zoe with a juicy dumpling and second is Ella trying to eat JUST the “beard” of the dragon candy (the part that most looked like cotton candy but though it is stretched honey it is NOT that sweet): 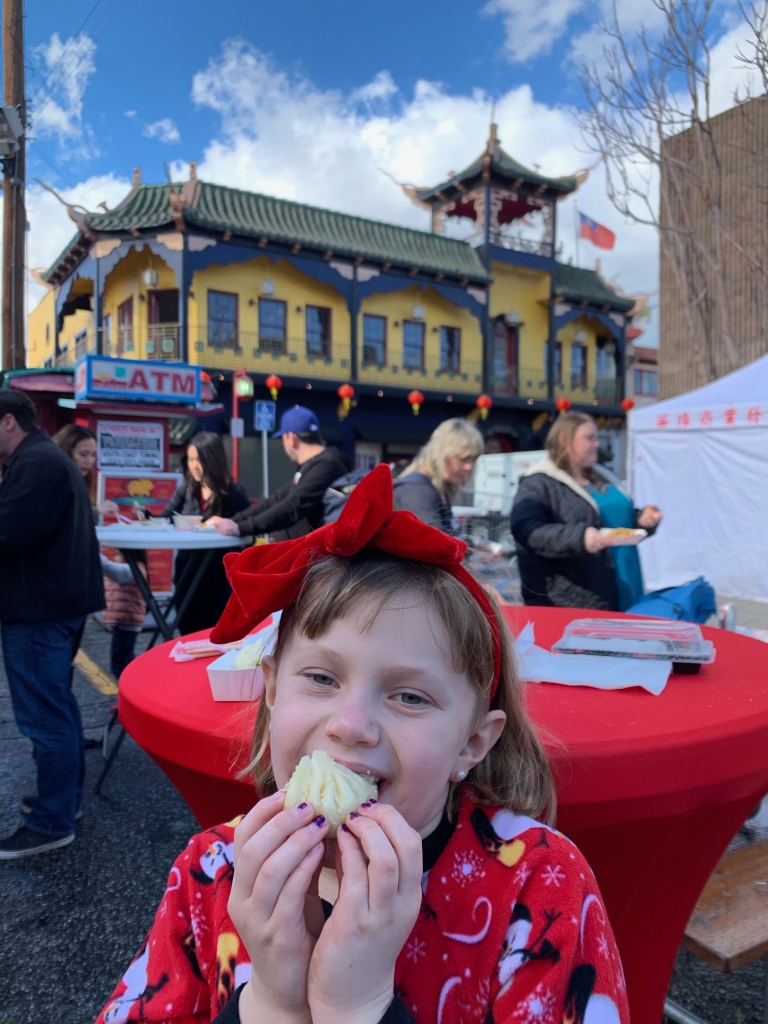 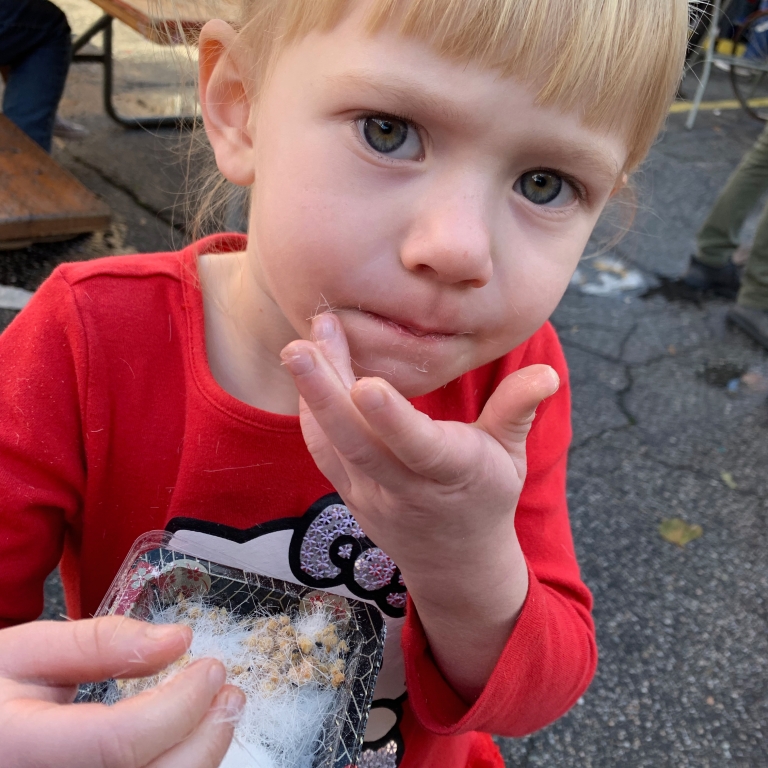 As part of this adventure we also ended up taking public transportation (WHAT?! IN LA?!), though we had to drive to Pasadena first to pick up the METRO line that stopped right in Chinatown. That sounds more like it. We ended up meeting our friend Dan and his son (of Rose Parade fame!), and Zoe spent her time wanting to do whatever the boys did. Maybe that’s because they had the poppers first.

Here’s a picture of Zoe at the METRO station with a DRAGON picture print-out around her neck, the compromise we made for it to be OK for her to wear pajamas (not kidding):

This year of the Chinese Zodiac is the Year of the Pig, which (conveniently)  I am, being born in 1971 with some fantastic qualities, outlined on this poster in tiny print: 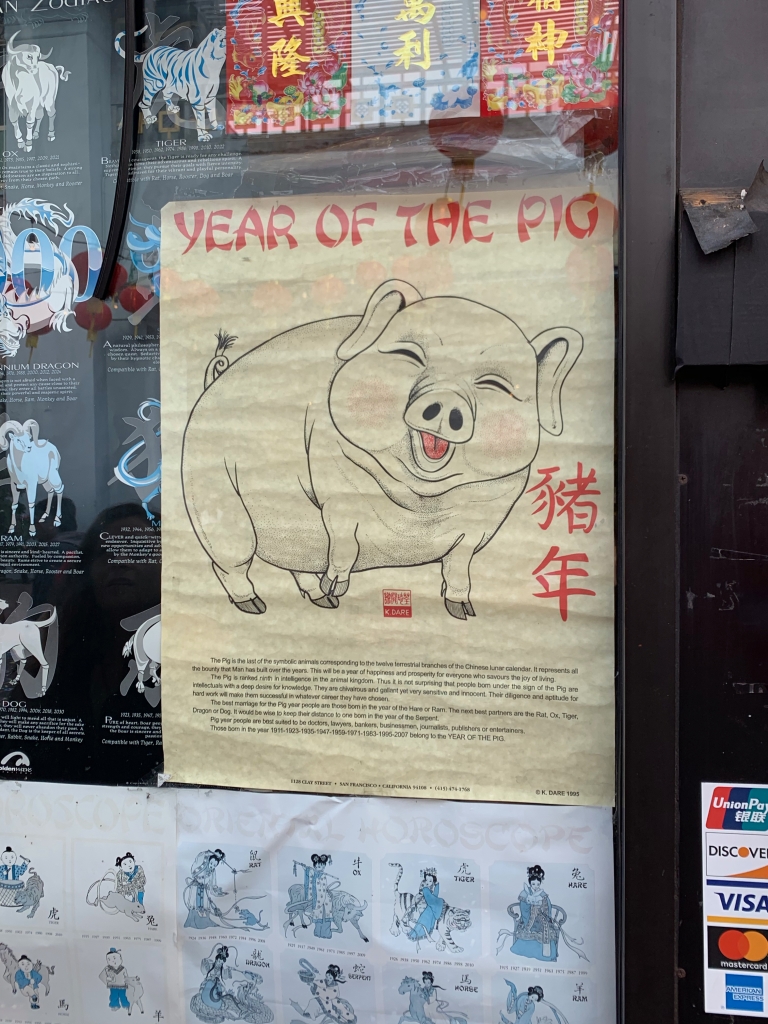 It’s also supposed to be a good year for us Pigs, and if you want to check out how you’ll fare, you should read your own zodiac writeup online. Overall, even if there was no such thing as Chinese food (which I’m glad there IS), I think that Chinese culture is fascinating. And I’ll leave you with my last video, which is a brief one of some musicians performing in Chinatown Central Plaza.

And before you go, I must point out that it’s JUST ONE DAY until my mother’s birthday, and MOM, I hope I’ve delivered on my promise of a whole week of daily content for you and that you’ve enjoyed the posts as much as you say you do. ONE MORE TO GO!