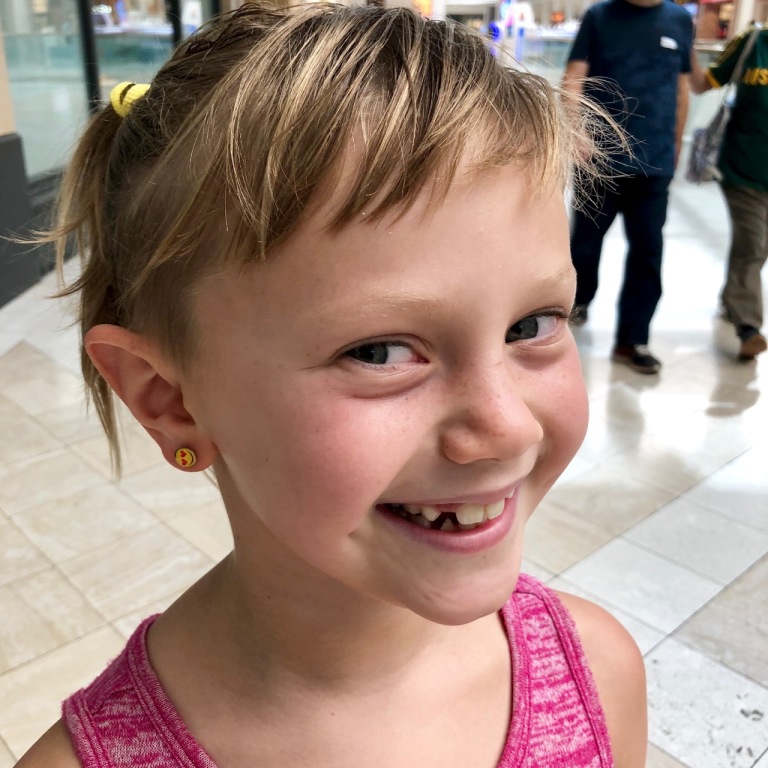 YAY! As an early birthday present, this little beauty decided she wanted to get her ears pierced. Actually, she wanted to do it before we left for Minnesota, but given the time zone changes and busy vacation schedule (oh, and the fact I wanted her to BE SURE she was willing to take care of her own ears after), we waited. One of us waited patiently, the other, less so.

In the meantime, I insisted that she also a) learn how ears were actually pierced and b) read aloud the self-care instructions and warnings. While she did ask a few times about how much the piercing part hurt, she was determined.

We thought we’d be the first customers at Claire’s at our local mall, arriving as the mall was opening, but thankfully (not) there was already a child in the chair about to get her ears pierced. She was around Zoe’s age (a little older actually). I knew this was not going to go well as she repeatedly tried to put her ear down towards her shoulder… Mind you, this kid WANTED to get her ears pierced! Then, to make it awesome for other little girls who were watching (like mine), she screeched like an angry owl for several seconds before and after the piercing. Awesome.

Luckily, Zoe is a self-confident and, as I mentioned, determined child. She gave me one quick look then resumed her focus on getting those holes in her own ears. I stood in front of her, held her hands, got her to breathe and focus on my necklace, pointing out that breath and focus keep us centered. She is a fabulous student. She released a tiny nervous “eek” as the first ear was pierced, said that was “not so bad” and said NOTHING for the second ear. I was so proud.

As the obsessed mother you know I am, I had done my own research about the after care. Claire’s offers a “rapid healing” version that supposedly only takes 3 weeks (vs. 6) to help your ears heal. Sound too good to be true? Apparently it might be. From what I found online, it MIGHT actually work, but that would be due to the BLEACH that solution contains… so we went for the 6-week standard version, with a commitment from Zoe that she would be personally responsible for her care.

Zoe was so excited and proud of herself (as she should be!), showing off her smiley face emoji earrings to anyone who would look – or listen – and telling other little girls in the store that it was really no big deal. That night she diligently cleaned her ears all by herself and went to bed.

At 4 am, she was by my bedside saying “Mommy, my earring fell out.” Yep. Best laid plans, right? Bart got up and went to help her look for that earring while I consulted Dr. Google on the subject. Let me tell you something awesome: NOWHERE on the Claire’s site or paperwork (or verbal instructions from the store) do they mention what to do if the earring FALLS OUT – which, in case you have no piercings, is a VERY BAD THING during the first 6 weeks of healing (not to mention the first 24 hours!)…

Mind you, these people at Claire’s have apparently pierced “Over 100 million ears.” But I digress. Thankfully, Dr. Google is FILLED with advice for anxious 4 am parents from 100 million OTHER people who have had this happen. That advice (this is real) ranges from:

Concerned we would introduce infection or damage the hole, I told her, “Hey, worst case scenario we have to let these heal and go back and do it again. Don’t worry. Just go back to bed, and we’ll head to Claire’s tomorrow morning.” And without a tear, she did.

When I woke again (less befuddled than at 4 am), I again consulted Dr. Google and found advice to be sure to gently pull the ear lobe down to help get straight through the hole. Eureka! Except… by the time I saw Zoe, she and Dad had already “tried again”… so we agreed to just wait for Claire’s to open and head back. I was also concerned we’d get it back in only to have it fall out again if there was something wrong with the earring.

The Claire’s folks were nice, “surprised” the earring had fallen out (still had no advice for what we should have done), and – you guessed it – they had to pierce her ear AGAIN. Which they did, and while I was the one cringing (a piercing is an OPEN WOUND – surely this time it would actually hurt!), Zoe didn’t even flinch.

I am pleased as punch to say that EVERY SINGLE DAY AND NIGHT since August 18, Zoe has (on her own and unprompted) remembered and cleaned her piercings. What a kid!

I’m equally thankful that Ella has been convinced that she has to wait until she’s Zoe’s age to get her ears pierced because I am 99% sure THAT kid would NOT have the story above any time soon… One kid at a time. I’ll call this adventure a success! 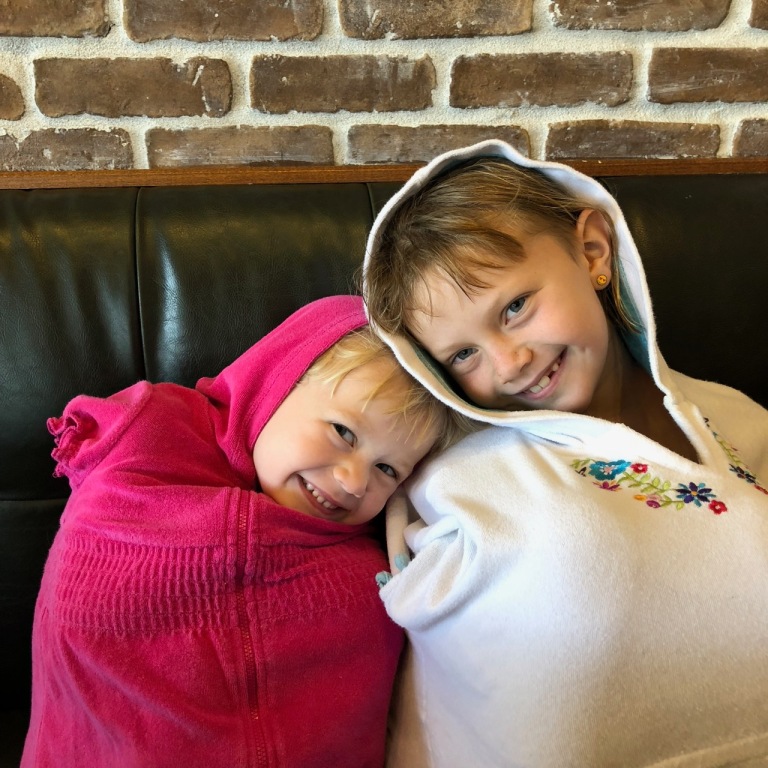 2 thoughts on “Fun with Ears!”