It all started 7 years ago (plus 38.5 weeks, but who’s counting?). Alright, we won’t start at the beginning, but the birthday discussions for this year started a few months ago. Let’s start there.

For the past 6 years, we’ve celebrated Zoe’s birthday at our home, with a progressively nuttier me trying to one-up every year and mostly a group of OUR friends, which we selfishly invited and fed adult beverages (which in my opinion is the only way to attend a kid party).

There are a lot of pros to a home birthday party:

And then, there are a lot of cons…

But this is the first year Zoe has had a LOT of school friends she wanted to celebrate with, which (plus all our friends) would have been a huge party at home. In addition, last year we had about 7 of her “school friends” and there was a LOT of running through the house and banging doors… The thought of 20 of those?!

Add on one more wrinkle. We have 2 kids, whose birthdays are about 2 weeks away from one another. For the past 2 years, we’ve been able to combine those (and honestly, Ella just knows it’s a party, so she doesn’t care). While 40 (or even 50) people may sound like a lot, there are 24 kids in EACH of their classes – add even one parent and not ONE sibling and that’s 100 people, if all show up.

And so, the compromise: Discovery Cube. Slightly more reasonably priced (including really great pizza), and it’s a science museum, with LOTS to do – and a Dinosaur Exhibit. As I was creating my evite for the two-girl party, I realized the potential volume of people, and the fact while Zoe LOVES dinos, they pretty much scare Ella.

That’s how Zoe ended up with a venue party, dressed like a “dainty dinosaur” (a costume which every parent and lots of strangers asked me where I got – thanks, Amazon): 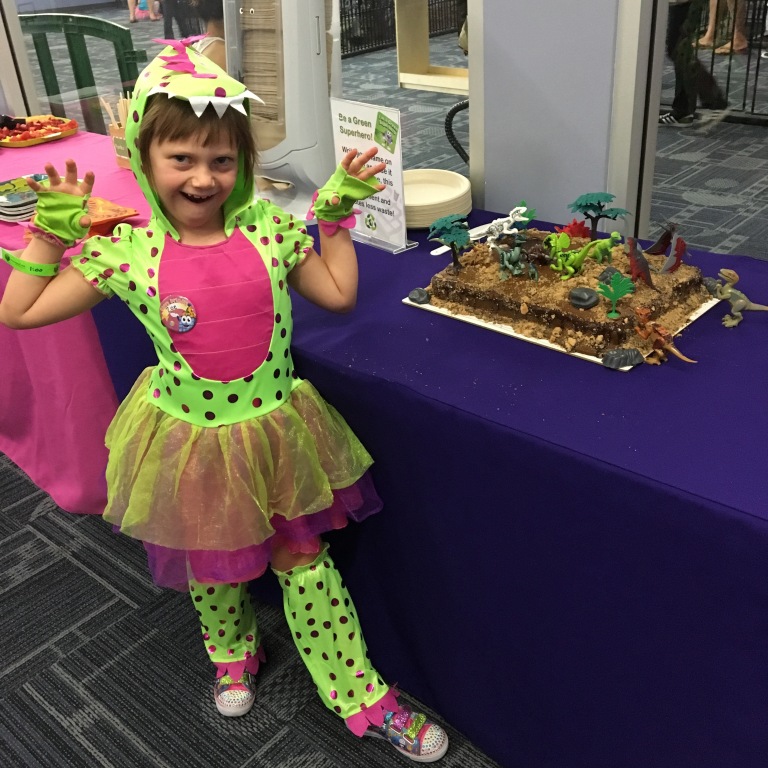 BEST part of that outfit? I could find my birthday girl from literally across the museum. (Unintentionally) Brilliant.

So about a month ago, we had venue, invite and theme all set. Up next, the cake. I began my search online so I could lay down the gauntlet for my husband again this year with our annual cake challenge. On Pinterest, I found this: 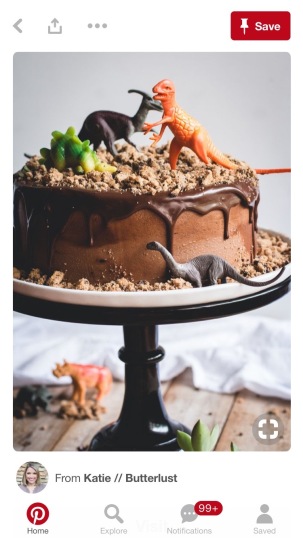 From that little picture, my husband created THIS:

Yes, you CAN believe your eyes. That’s a La Brea Tar Pit (filled with melted Ghirardelli dark chocolate) and a prehistoric scene art directed by our very own birthday girl, Zoe. That bright green dinosaur is from the Jurassic Park movie, where he spits ACID. So while you may not be able to make it out on this picture, there’s also dark chocolate on the poor dino in the tar pit, from its ACID spitting friend. Zoe’s idea. Oh, and those are Chips Ahoy cookies crumbled all around (or prehistoric dirt, if you prefer).

This year we were lucky to be hosting our book club (which is a chunk of our group of friends who usually show up for Zoe/Ella’s birthday party), so our first celebration began the Sunday before, with the cake you see at the very top of this post, and singing (plus adult beverages) with many our friends.

My mother arrived on Wednesday (she never misses a birthday!), and on the Friday of Zoe’s actual birthday, we went to her favorite restaurant, Miceli’s, where the waiters are all singers and perform between table service. And Zoe got a birthday song all her own:

And a couple of great pictures with her nina (my mom):

On the day before, Zoe’s father had “donated” to the school to make this happen on the lighted display board outside her school: 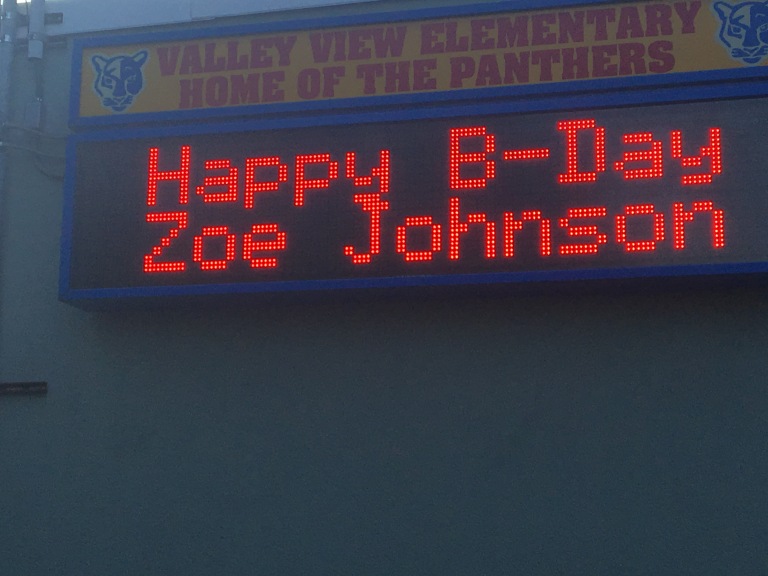 We pulled up on Thursday (the last day of school before Labor Day closures) with a bag full of small gifts for her class (yes, another party), and you would have thought her name was up in lights on Broadway! Did I mention how amazing her father is?!

Also on Friday (her actual birthday) another thing happened: A HUGE FIRE. In the La Tuna Canyon area, a brush fire was blazing, which so far has burned over 7,000 acres (the largest fire of its kind in LA history) and was only 30% contained by Sunday night… That fire started 8 short miles from the Discovery Cube.

After checking in on the people we know who are also close-ish to that fire, we (ok, me) obsessively started calling/emailing the Discovery Cube to see what impact there might be to people trying to go there for, oh, say, a Birthday Party…

Though several people had to find alternate routes, I’m pleased to say that they arrived safely and a great time was had by all. And now the only problem that remains: What the heck do we do for the other child who turns 3 on September 16?

But for now, we’ll enjoy one little victory, and share LOTS of pictures of a dainty dinosaur and a couple of short videos for you to enjoy. If you want to see any of the pictures “bigger”, check out our photo album. Our NEW 7-year-old: 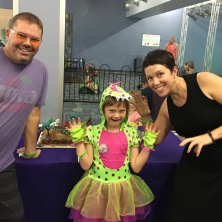 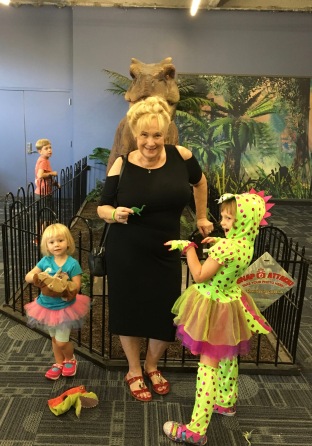 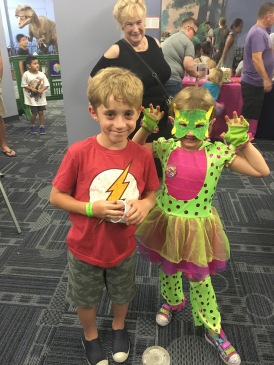 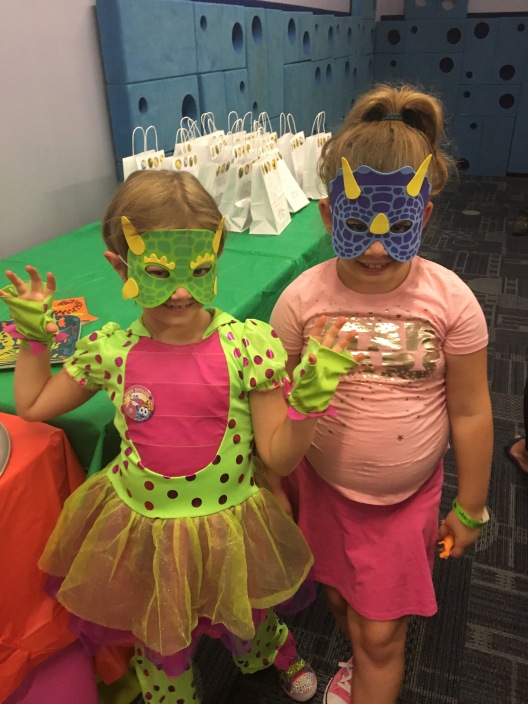 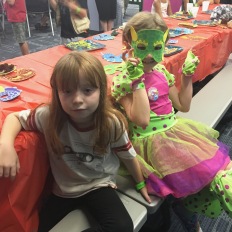 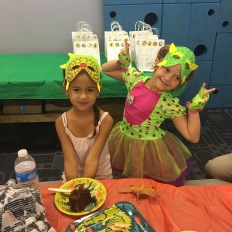 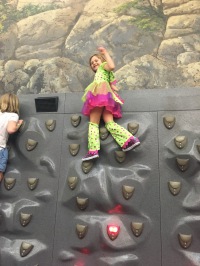 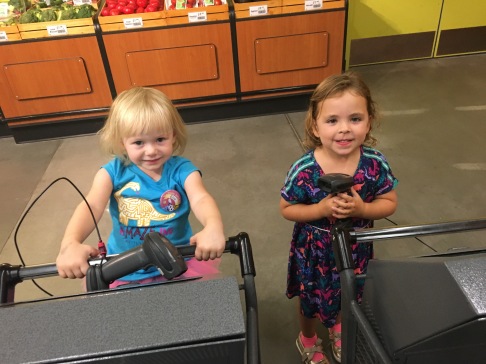 I think this kid had a PRETTY GOOD BIRTHDAY.