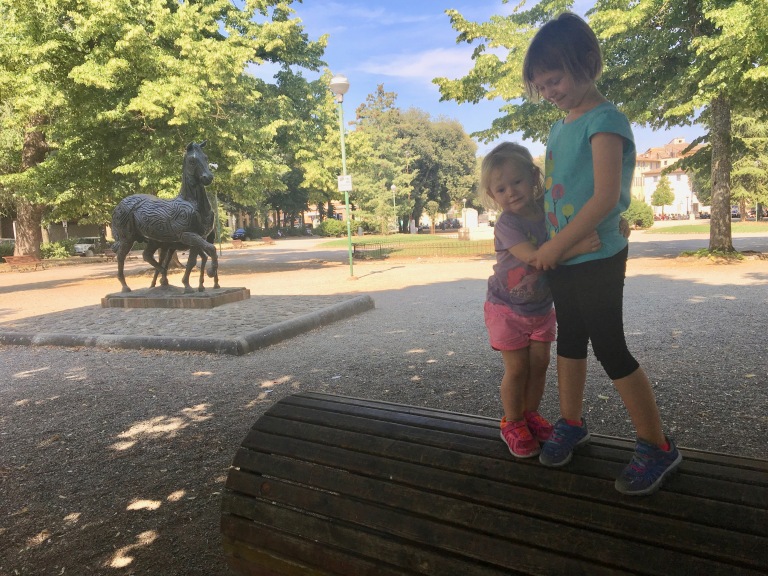 So the title is a little misleading. We found Siena just fine (me navigating from the passenger seat, Bart driving) but it was a clunky visit.

First of all, we decided on our “free day” in Italy to drive to Siena, a medieval city people frequently recommended that was about 1.5 hours away from Sieci and for which I had found a cool post online about not one but FIVE playgrounds! Since the kids had spent days looking at “old stuff” and we were headed for 2 big travel days, we decided to do something they should enjoy.

Turns out Siena is a very circuitous city, with very very very winding streets to get around and into the city itself, so just finding parking near the playground we chose was a chore. And before I talk about that, here’s the description online of that playground:

Playground 2: This one is very central, just a few hundred meters from Piazza Gramsci. It is located on two sides of a small park with trees – on one side there is a climbing frame with a slide, and on the other there is a playhouse, a fish spring rider and a small pond with two swans and ducks.

Well, after parking a distance away and walking up a steep hill with steps while navigating an outdoor farmers market (where the kids got cherries and a peach), we arrived at the “playground” to see a METAL slide “on fire” out in the 90 degree day (no shade) and a gravel ground (no grass). By the time we got there we were starving anyway, so we decided to try again later and see if things cooled off. In the distance we saw the top of a lovely duomo (which we never found).

The other 4 parks were who the heck knows where because once we entered the “city” we were walking tiny pedestrian filled streets (sometimes also filled with cars that didn’t seem like they’d fit) with no real sense of direction. And so, we just walked and walked and walked and walked until we found the Piazza del Campo (the main square). 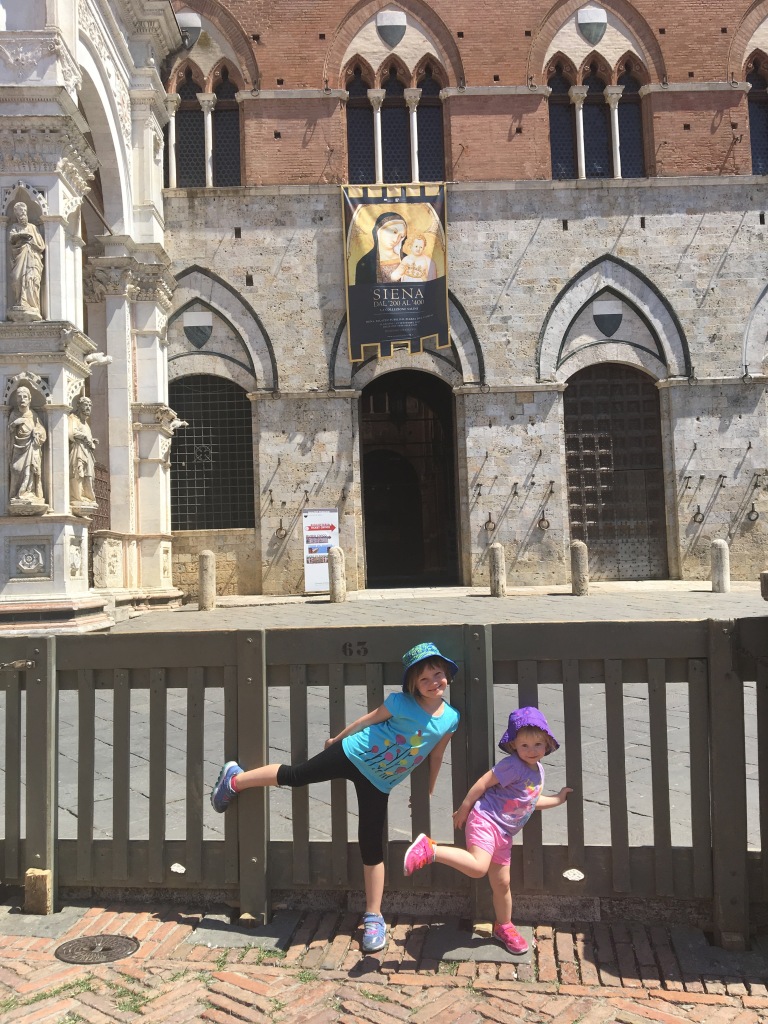 Siena is known for being a well-preserved medieval city – supposedly they even require new structures to bear medieval architectural elements. While beautiful and different, the streets are filled with shops and shops and shops, feeling very touristy. Once the streets open to the square, it looks like a totally different place – very cool to see, and very very very hot to stand in the middle of a paved square with zero shade or water.

I tried my panoramic view again, with strange results. What is a perfectly rounded square looks bent in this picture, so use your imagination to curve those buildings on the left into the semicircle aligned with the tower (and forgive me).

To get back to our car, we had two choices: Head back same way (uphill) or head in a different direction (also uphill), either way pushing strollers with children in them. For two old people, we got a heck of a workout over here in Europe. Oh wait, a third option would have been a taxi. Remember those circuitous streets? To walk, 9 minutes. To take a taxi to same place? 25 minutes. Not kidding.

And so we walked back, which turned out great for me as I got my one and only really cool souvenir from Italy: A Gabs Purse! I know. I have been carrying the same small (not so great Le Sport Sac) purse for a few years. But this purse was cool! Italian leather (of course) and it is adaptable, with snaps and zippers that literally transform it to new purses. Plus, it will still (technically) fit in my backpack. Woo hoo! Don’t worry, it’s black.

When we reached that terrible playground again, there were parts that were now in shade (including area with swans), so the kids got to play for a while after all. 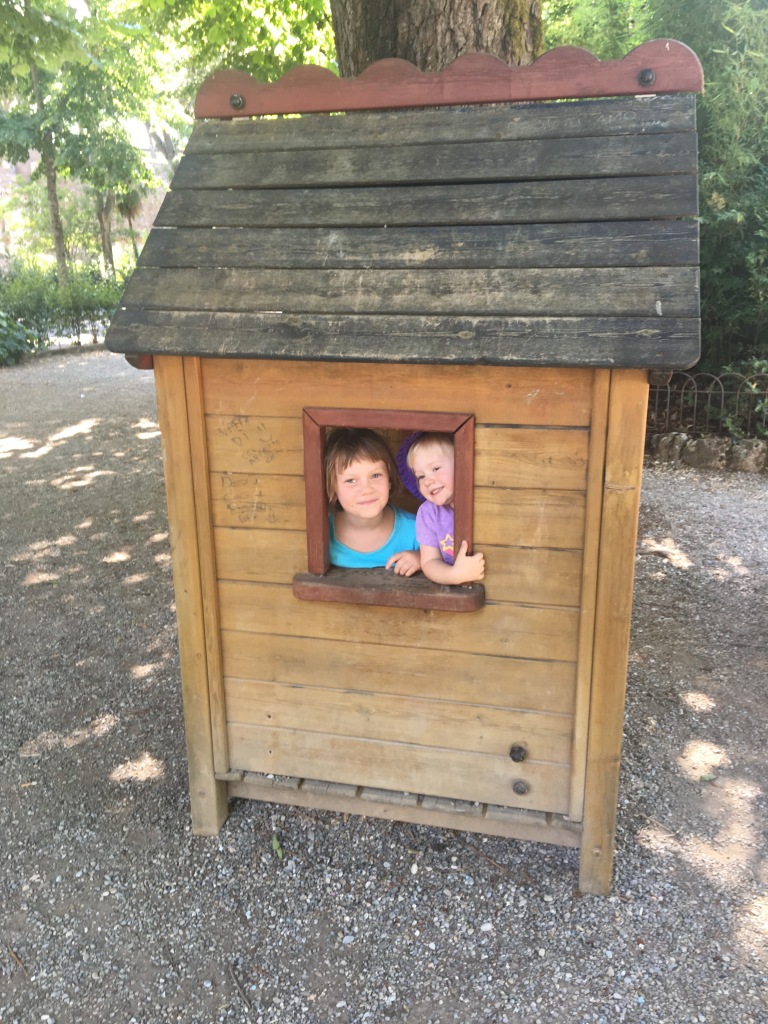 Until a bug crawled on Zoe’s hand and with terrified faces, the kids turned to me to leave. See if you can find their new friend in my “Where’s Waldo (Bug)” photo below. Hint: He’s huge and black. Hope you sleep ok after this…

On the way home, my expert navigation skills ended up with a wrong turn that led us through some small Italian city for a 7-minute detour (exciting!), then we headed to Pontassieve where we’d found the hipster pizzeria before and found a cool burger place that ALSO could have been in any hipster part of the US called Villini Lab. Nearby was guess what: another laundromat, where my saint of a husband washed our clothes while we ate.

And so ended our official Italian sightseeing leg of the journey. Overall, a success if you ask me, though we left exhausted after long, hot days wrangling small children. Speaking of which, guess what Ella did as we drove across the Italian countryside? That’s right: 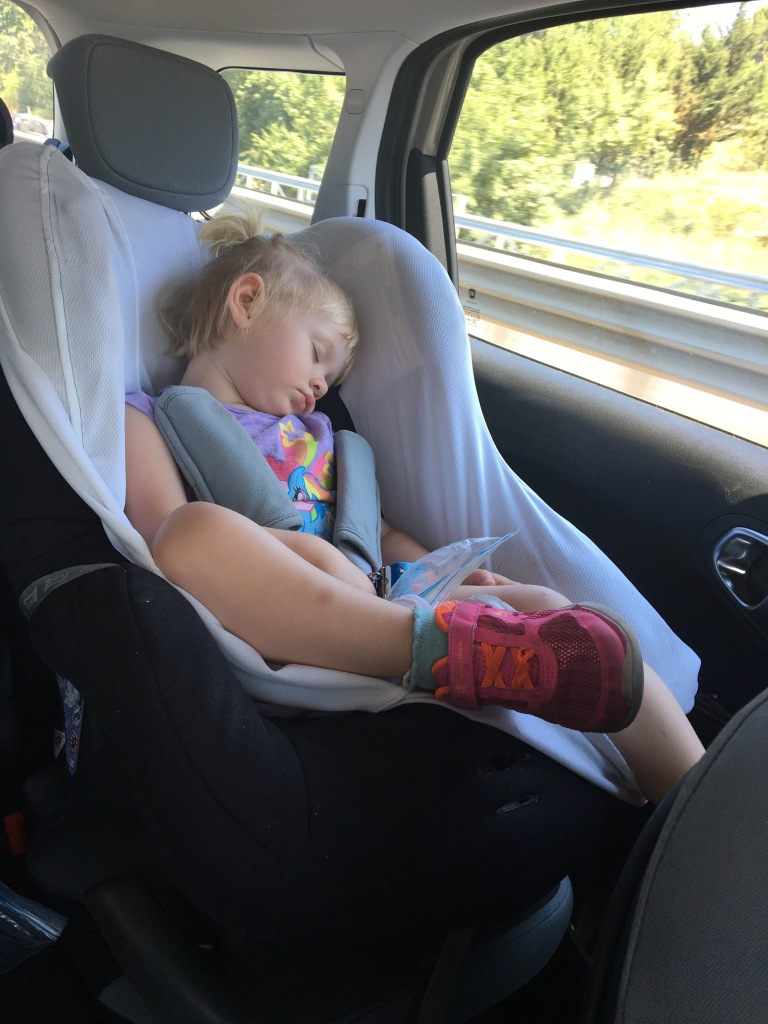 Man, that kid can sleep through anything (takes after her father). I’ll wrap up with a few more random photos from our Siena adventure. Up next: LONDON. Arrivederci, Italy! 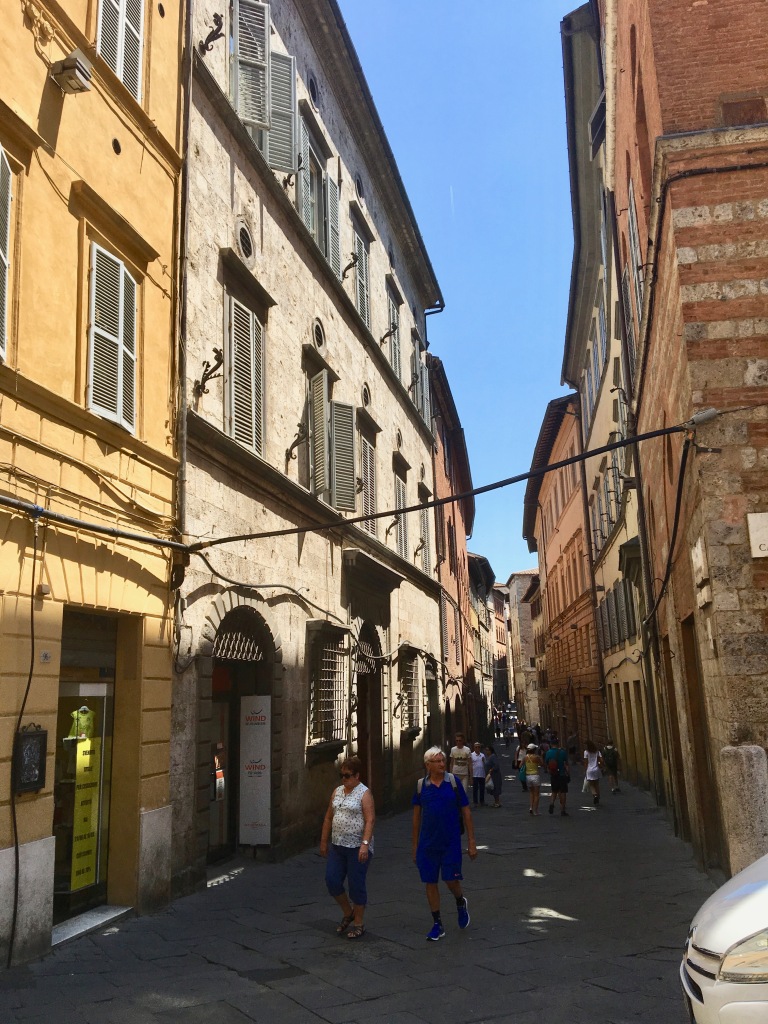