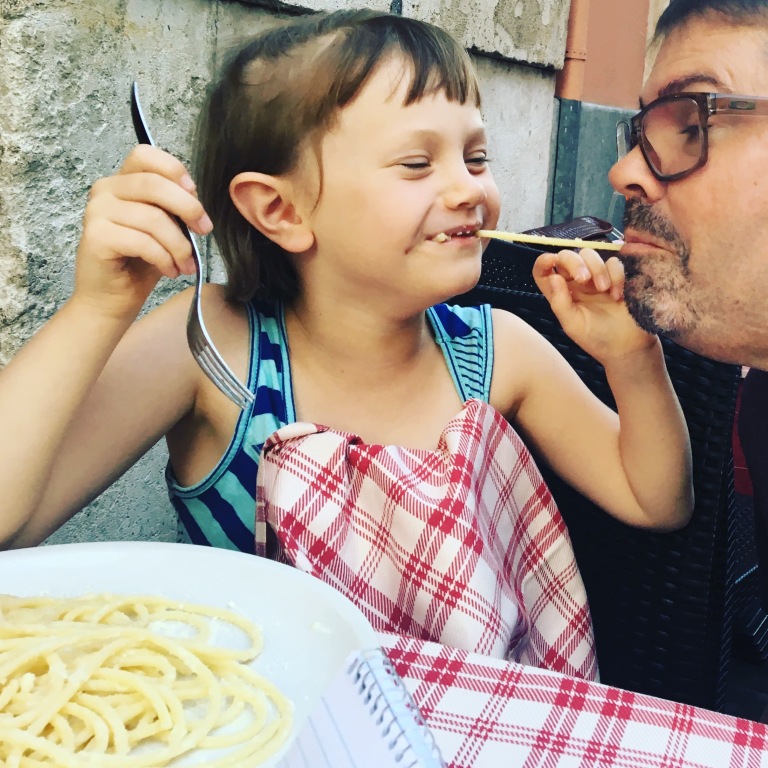 The first thing to note about Rome is that they have hotels with A/C, a huge jacuzzi tub AND a shower and (gulp) internet access that is faster than dial-up (though honestly, not as fast as home). They also have 5 flights of stone stairs but they have a tiny lift (“3 persons max”), but at a place called “Suite Dreams” with the amenities above, how could you go wrong? 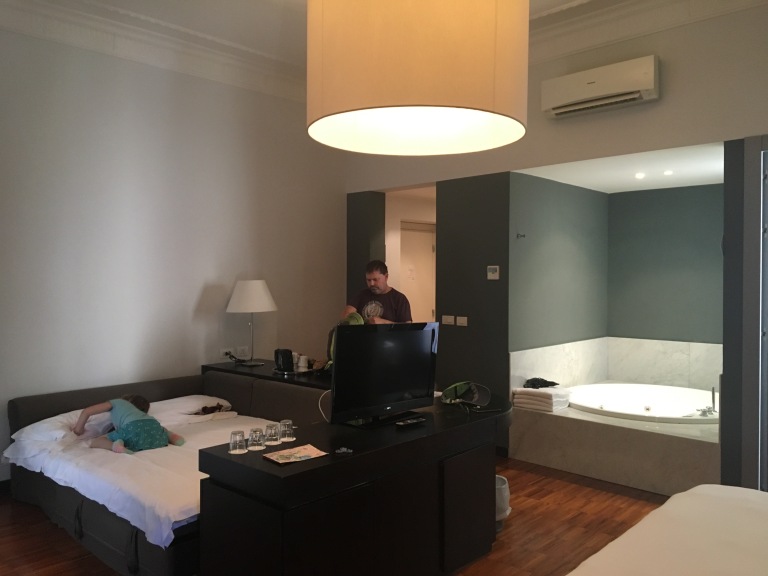 When we walked in the room for the first time (after traveling on a train from Sieci to Florence, then Florence to Rome for about 3 hours door-to-door), I never wanted to leave the room. But we were starving (oh, and in Rome), so back out into the 93-degree weather we went for lunch at the Rosemary Cafe, then headed out to our next adventure, the Colosseum!

Insert fun fact about AT&T: When I called to setup an International plan, after searching online for info, I chose the “Passport” for 3 of our devices, which is about 200 MB of data per device. HAHAHAHAHA.  We used up the first 200 on Bart’s phone just navigating to our farmhouse then to PIsa, and used most of mine on the way back. And so, I called AT&T to see if we could change our plan. Turned out we could! In fact, we can have our SAME PLAN as at home (which includes unlimited data) for $10/day per device. That may sound like a lot, but 200 MB (which we used in less than a day), cost $40 per device… KUDOS to AT&T for swapping out our plan without charge, which has allowed us to navigate, search and entertain children for days at a lower cost, and you’re only charged for days you use it. Anyway, we are clearly internet dependent.

In fact, as I type this from London, I woke in a panic to find that our charging block died and NONE of our devices charged overnight. Perspective? We have 3 power sticks, 3 iPads and 2 iPhones, all of which we have depleted almost completely every single day here (especially the phones for navigation). But I digress…

Back to Rome! We left our “suite” hotel and headed out over rocky roads filled with insane Italian drivers (and countless motorbikes and pedestrians), each with a stroller, a backpack and a kid. Bart’s job has been to navigate the street walking, while I navigate the roads as he drives. Safety first!

After what felt like 10 miles (it was 1.1 miles) of walking (remember that 93-degree weather), we arrived at the Colosseum to meet our tour guide right on time – with two sleeping children. Our guide, Alessandra, who I selected for a “kid tour” of the venue had that look like “I hope you big people like to color…” but graciously started off towards the Colosseum, ready to adapt her tour.

On our walk across the street, the street vendors descended on us, peddling colorful selfie sticks – and umbrellas. Though Zoe was still asleep, I knew she’d love one, so I asked for a price, walked away, paid one-third the original price and bought an umbrella. And I was right, she did not want to put that umbrella down (and unfortunately she did, beside me, and I left it on a bus – but that’s another story).

As we entered the Colosseum, I woke Zoe and the tour began. I’ll skip all the detailed info, but let’s say it was MASSIVE and impressive – one of the Seven Wonders of the World! If you want more overview (of Colosseum and other sights), here’s a link with just enough info to be dangerous.

During the tour, the guide would periodically stop and ask Zoe questions, show her pictures from some cool books that showed what it used to look like and how gladiators lived, then give her things to color – she even gave her a cute multi-color pen as a prize and ended our tour by handing her a bag full of peach gummy candy. SCORE. 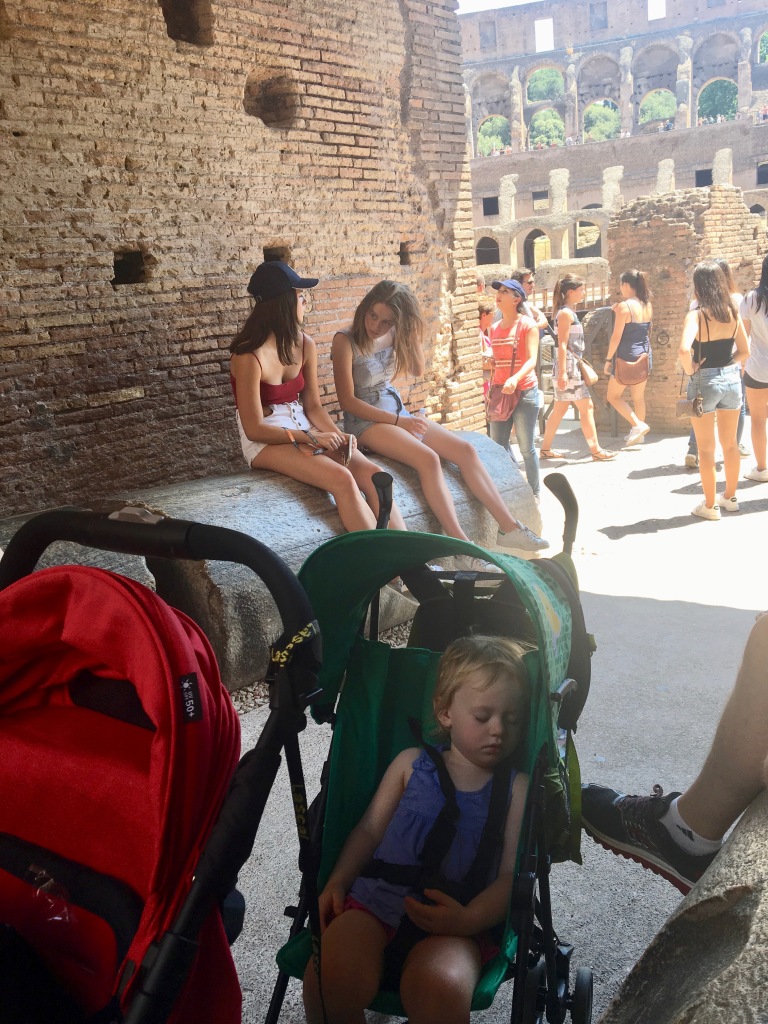 That’s not to say that Zoe didn’t love her own private tour of the Colosseum, but I’m pretty sure that awake Ella would have wanted to run around (YIKES) and play (DOUBLE YIKES). She cared literally nothing for the “old stuff” – not even a “wow”.

But back to Zoe. With her new blue umbrella in tow (watch out heads, arms and legs of anyone in reach), she had a great time learning. 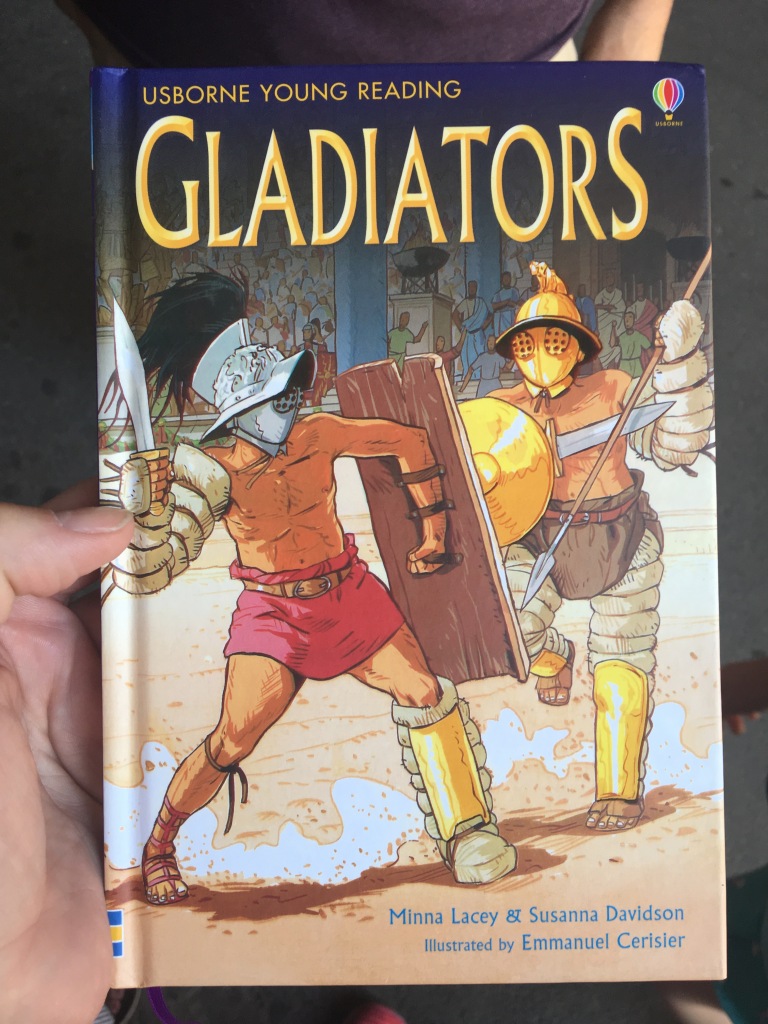 And even Ella got a chance to color near the end.

And by the very end of our 3-hour tour, we were all exhausted from heat, standing and walking, but gladiators are tough. Oh, and you’ll see a few of these, but we bought an interactive book to use before and during our trip to Rome and learned about how many statues of Roman Emperors had them standing with right arm raised. So you’ll se a few of those pictures of Roman Emperor Zoe. 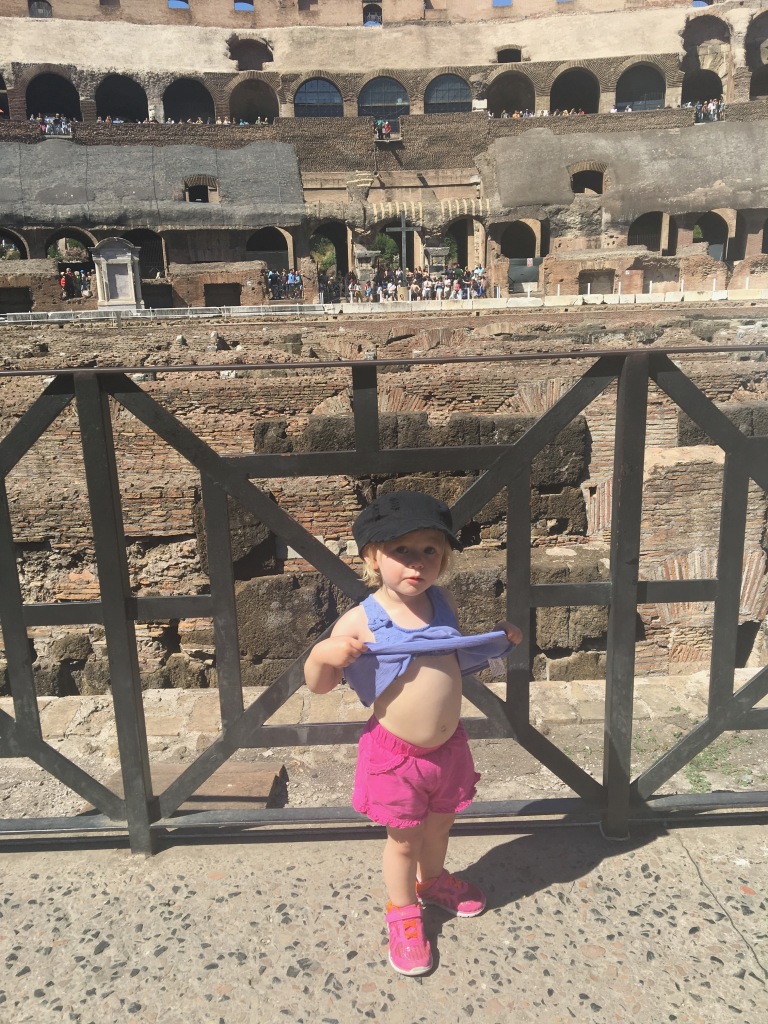 Exhausted, we ended our tour at a gelateria, thanks to our tour guide, and never made it to the Roman Forum (which I am totally OK with). Instead, we headed back to the hotel for some time in the jacuzzi tub, which Zoe would like to bring home as a souvenir. Then we headed out to dinner, in search of NOT pasta to a neat area of Rome called Trastevere on the other side of the Tiber River, providing us with some great evening views of the city. On the way, our taxi driver suggested we could “eat meat at home” and encouraged us to go to another place, called Popi Popi (pronounced Poppy Poppy, like Ella’s favorite Troll, so how could we not go?).

As we got out of the taxi on a cute street, so did the driver, and he hugged 3 of the waiters standing outside (can you say “tourists, trapped?”) Thankfully the dinner was fantastic, one of Bart’s favorites, and we got the cute Lady & the Tramp picture up top, and these: 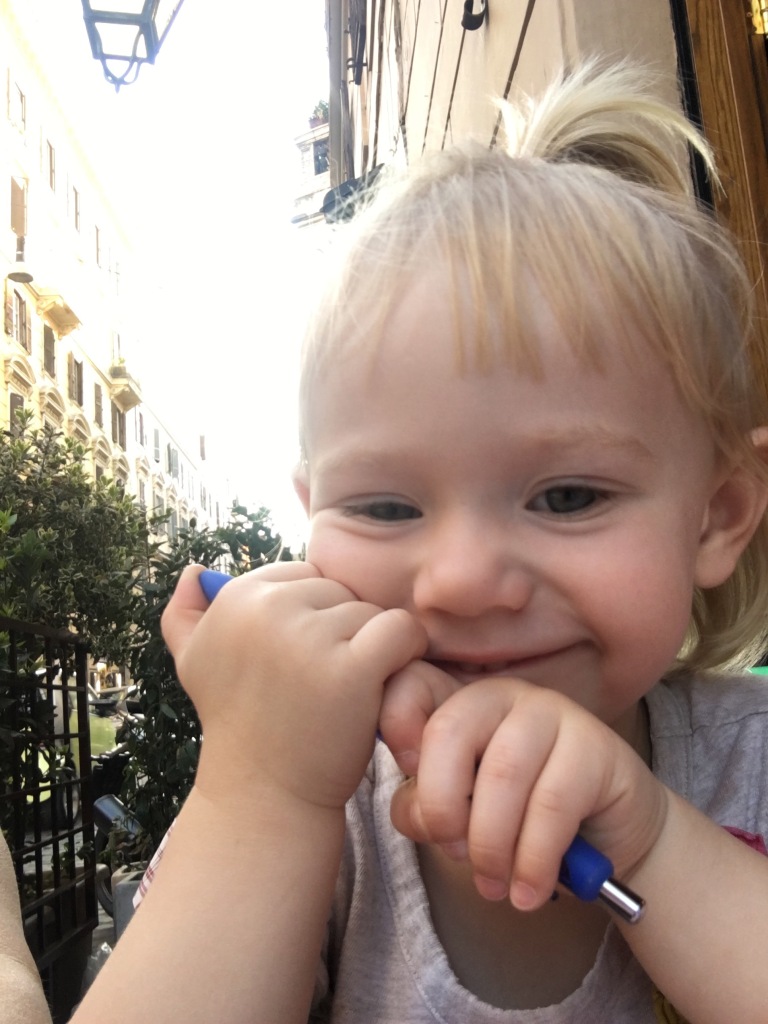 PASTA, Shopkins, paper and colored pens – our non-digital entertainment at an open-air old school Italian restaurant. In fact, I’ve never loved tiny toys more than on our European vacation (guess who picks these up most often from the floor of our home?). But for travel, perfect.

Notice not a word about “old things”. Just sayin’. She’s a kid.

After a very full day in Rome (and a sambuca for Bart at the end of the meal) we took another harrowing taxi ride back to our hotel. Zoe was asleep almost immediately. Bart followed not long after, but Ella, she remembered. Her night ends with a “baba” (milk), and we had none. So with a sleeping Zoe, a snoring Bart and a crying Ella in the background, I called down to reception to find milk.

And they took me to their kitchen and poured milk in my empty bottle, warmed it, and Ella passed out happy. So did I.

In case you’d like more pictures of the Colosseum (sans cute kids), I’ve shared some below. Without all the context, just note that everything BELOW the “ground” is where slaves with oil lamps prepared the magic, sending animals up to fight (look for a wooden ramp system in first picture) and gladiators. Apparently this entire floor was covered in wood as a stage for the games and even filled with water for naval battles at one point. Above was a stadium housing around 70,000 people (this number varies) and was covered in colorful marble with colorful frescos and had colorful statues as well (not just a big white structure). Restoration is underway to clean it now and as recently as March, archeologists are still uncovering new information (and bones…) It was amazing to see. Enjoy! 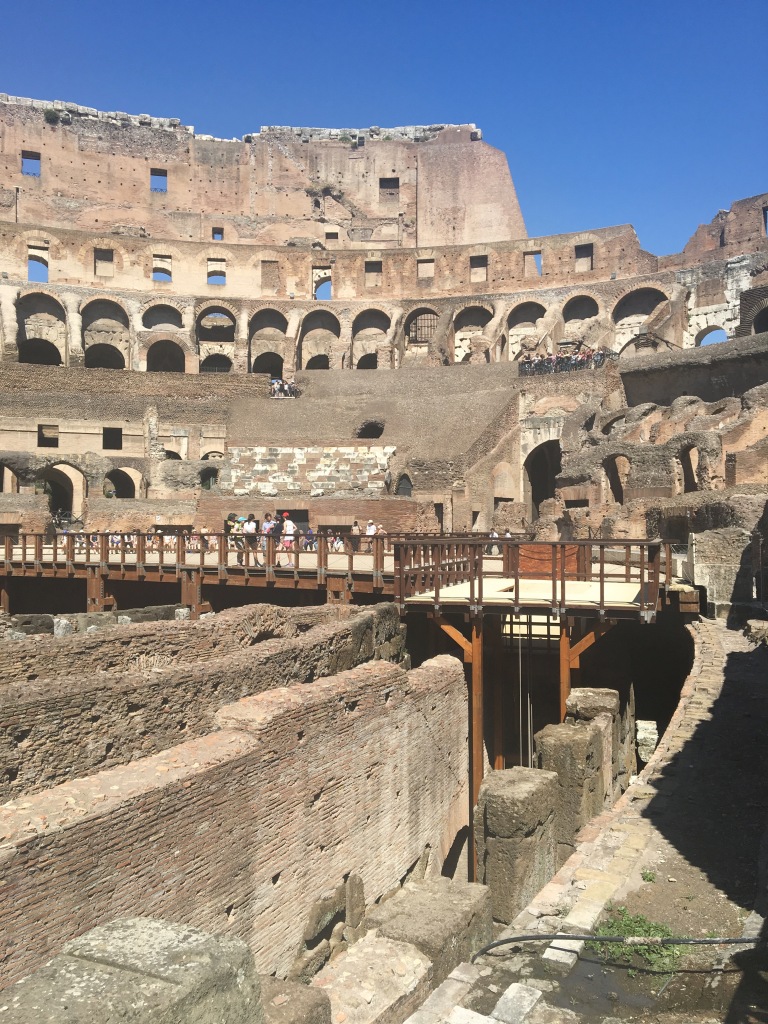 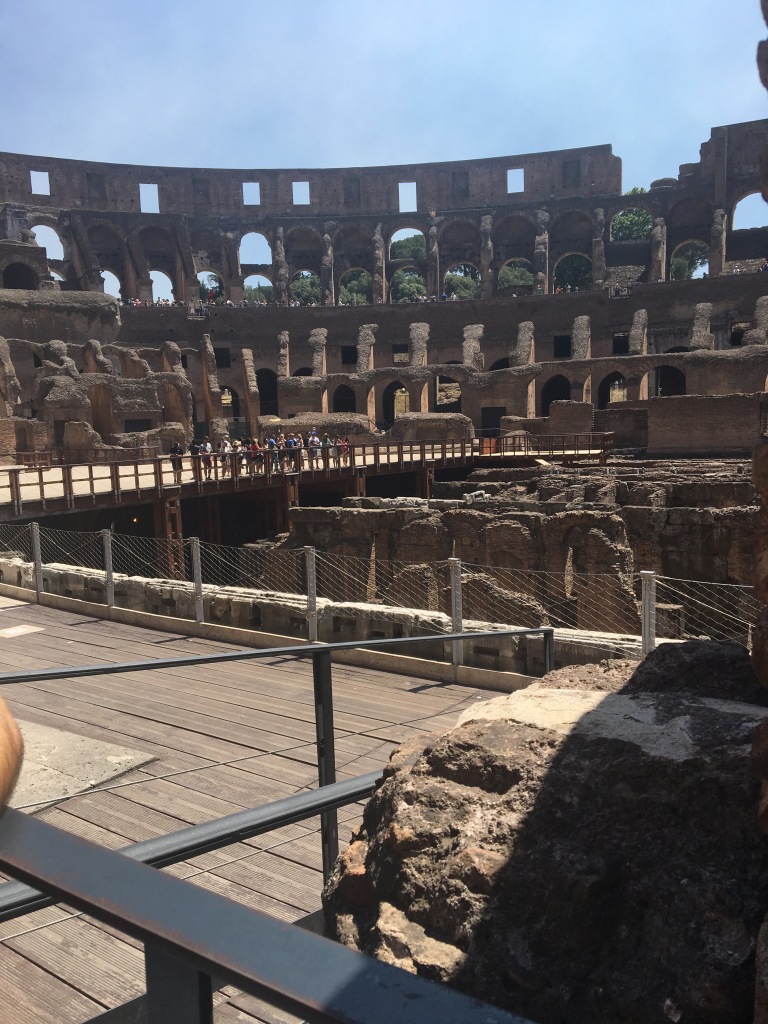 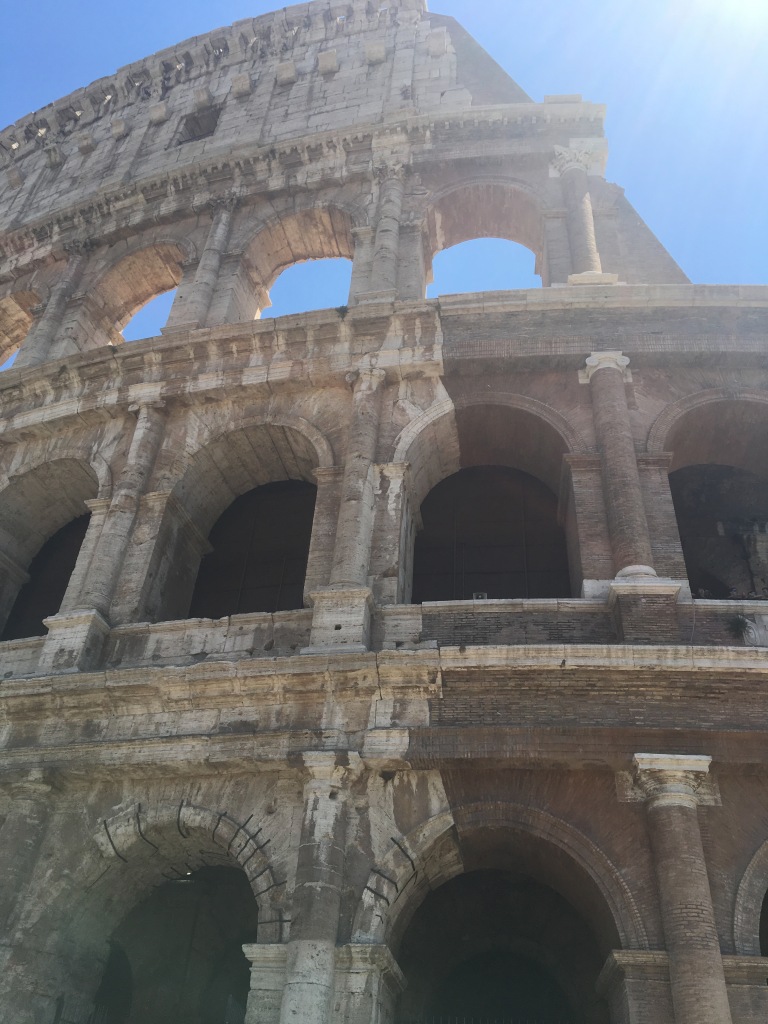