I’m going to call it a success.

Yes, I’m exhausted, but so are the two sleeping girls in my home.

Shortly after the cinnamon rolls and some “face time” with Daddy, we headed out for our first adventure: The Garden Store.

Last week Zoe went on a field trip to a pumpkin patch and learned that if you plant seeds, you can grow your own pumpkin. Honestly, I have GROWN pumpkins in our backyard when she was younger and I wanted her to want a garden, but hey. Everything in its own time.

We left the garden store with 6 things:

We came home and planted + watered our plants and released our ladybugs to much delight (by the children, and possibly the ladybugs but they aren’t that talkative – the ladybugs, not the children): 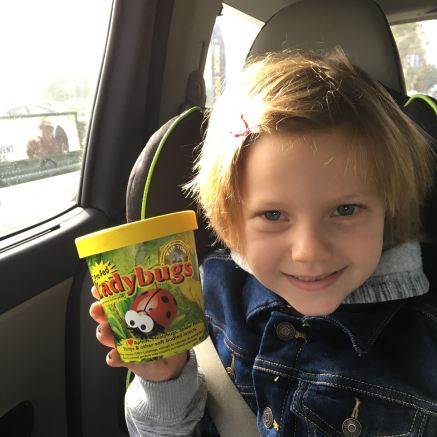 While we were snacking, I got a text from Holly (Zoe and the Ella’s nanny who just had a baby 2 nights ago) saying we could come visit them at the hospital. Well, the girls couldn’t go in to the room with the baby yet, but I did, and it was great to see them :)

Yes, I held a tiny fresh baby today and let me be clear: I had absolutely zero desire to make another one of my own. Anyway, back to the two I do have.

As any good mother would do when she realizes she’s running behind, we drove through McDonalds and got Happy Meals. Now I know that it isn’t really food. I’ve seen Super Size Me, which was disgusting and swore I’d never eat another McDonalds french fry (that promise, along with many others did not stick).

The good news? Zoe ate a cheeseburger and passed on the fries (what kid does that?!) and Ella fell asleep with a chicken nugget in her hand (well, 1/3 of one), so they didn’t actually eat much McDonalds. And I did not eat a McDonalds french fry.

We came home for naps, and I started planning our after nap departure to do the crazy thing that mommy wanted to do this weekend. If you love The Princess Bride, keep reading. If not, just wait for the next post because you’re about to think I’m nuts.

Turns out Westley (Cary Elwes) wrote a book about the experience called As You Wish, and as I was fishing through Red Tricycle (an online kids’ activity resource), I found out that he was going to be in Pasadena signing his book. I AM NOT STARSTRUCK. In fact, I have seen lots of stars out here in LA over the past 18 years and really just think they’re people (like every waiter here) who happen to do a highly visible job.

But something about seeing Westley, IN PERSON, got me. Zoe has seen The Princess Bride once, in the background, and a lot of the humor is pretty adult-oriented, so while she likes it, she doesn’t GET IT yet. We even tried watching it last night (knowing we were going there today), and she was still only mildly interested. However, she DOES want to be a princess – and therefore she also wants to meet a prince ;)

So when I told her she could meet a prince, she asked if she could dress as a princess, to which I enthusiastically said YES!

I timed out naps carefully:

Point 1 worked perfectly. Point 2 ended up a negotiation to get any clothes on her at all. Point 3, well, let’s just say we showed up on time to get our books but by then, there were around 200 people in line to meet Westley…

I couldn’t do it. I couldn’t stand in that line with two small children for my own selfish little dumb desire that had come out of nowhere – heck, at least we could gift those books to friends (without a signature, but they probably would never even think of standing in line to get one). And so, I delivered on my promise to let Zoe get a journal, let Ella get our 1 millionth tiny stuffed animal, did my best to take a sneaky picture of Cary Elwes (see up top behind Zoe), then took the girls two doors down for some appropriately cheesed pizza.

I swear I make motherhood look difficult. I had a diaper bag, my purse, a bag of books, was wearing a 2-year-old (she is not fun to walk with and will not listen to ‘no’) and holding the hand of a princess. The poor super young pizza people looked blatantly concerned and asked if I needed help. Let’s be honest: I DO.

After pizza, we walked back towards the bookstore to get to our car, and the line was MUCH shorter (though still long). This time, Zoe offered. She said, Mom, I think I can wait in that line. And so we did – for about 45 minutes, but it was 1000% worth it.

We were third from absolute last in line for the day.

Westley, in true princely fashion, greeted Zoe saying how lovely she looked, asking her name, telling her that her dress was the most beautiful dress, complimenting her painted fingernails, and asking who painted them for her. As we approached the table, I told him that she had dressed as a princess because she wanted to meet a prince.

We took a quick picture with him, after which, WAIT FOR IT: He gallantly kissed her hand, like princes do in movies. It was priceless.

He again told her what a lovely princess she was as I watched her face literally beaming with excitement, then he shook my hand, and I said, “And you really are a prince.”

I almost cried. I can’t even describe the feeling you get as a mother when someone goes out of their way to make your child feel really special. He didn’t have to do that – he hadn’t done it to the 10 other people in line in front of us who we were close enough to watch. In fact, he had been signing books for 2 hours – he must have been exhausted. But he DID. And it was the sweetest thing I’ve seen in a long time to watch her walk away, shy, glowing, and saying “I was a little nervous, Mom, but I did my best!”

I’ll stop harping now, but this day did NOT turn out like I thought. Instead of getting something I thought was for me, I got something even better: A reminder of how very lucky I am to be a mother, no matter how difficult it feels.

Sure, that didn’t stop me from being irritated as I tried to get them ready for bed and keep them up a little later so they could see Grandma and Grandpa arrive. No, I’m not interested in being a single mother, ever, but maybe I can remember this day and be just a little more thankful for what I have.

It’s not inconceivable – and yes, I do know what that means ;)