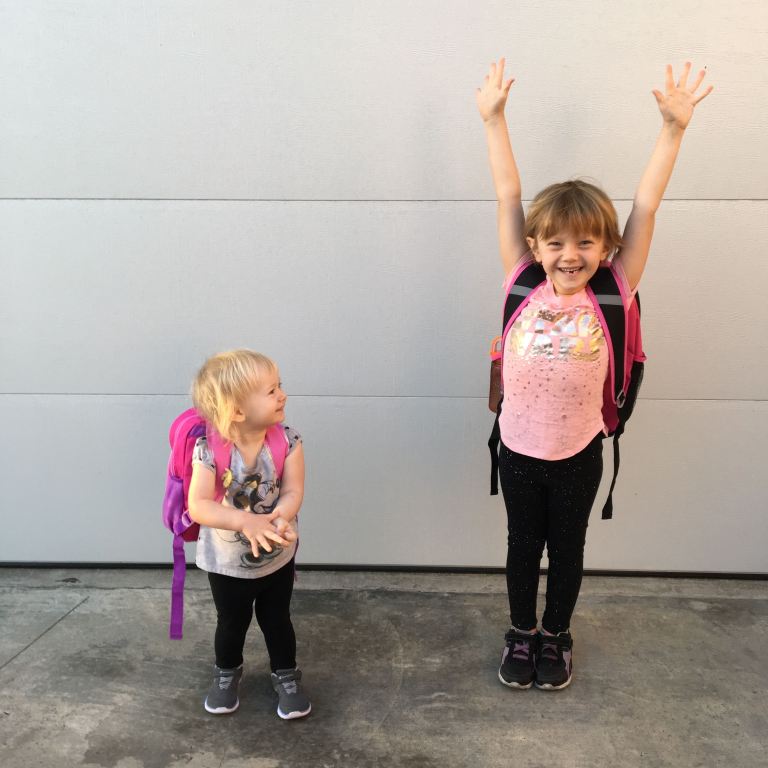 Poor Ella. First of all, her weirdo parents make her do “YAY, School!” for a picture, like Zoe did on HER first day of school 4 years ago. Worse? Her mother remembers as she’s taking the picture, AFTER Ella is dressed and on the way out, that she has dressed Ella in Zoe’s 2-year-old-first-day-of-school shirt… Cruel or Cool? You decide.

I wonder if we have those polka dot pants still? ;) Here’s Zoe’s first day story.

Anyway, let’s get this blog on the road. On Ella’s 2nd birthday, she started school. Her school actually started right after Labor Day, but she wasn’t allowed to start until she was “officially” two.

Good news? She’d miss all the first week CRYING of the other kids who just started school. Bad news? She’d be the only one CRYING since this was also her first school experience… But we had no choice.

Just as we had for Zoe’s first day, we scrambled to get everyting together: an emergency kit, nap kit, backup clothes, diapers, wipes, photos of the family in case she got sad – and in Ella’s case, I baked 3 dozen Chocolate Chip Oatmeal cookies so they could celebrate her birthday at school. This school rocks it old school and allows treats!

We had decided that since she’s been so excited to “go to school like Zoe does”, Bart would take them both to Zoe’s school first, drop her off (which has NO fanfare and Zoe skips away from the car happy), then he would take Ella to school in hopes of doing the same.

It worked. I worked from home, since we didn’t know what to expect, and I greeted him at the door the moment he walked in, ready to hear that she was BAWLING but that she would be OK. Nope. Apparently, she didn’t even cry… She was playing with toys while he downloaded her “details” to the teacher, then was still playing and barely said goodbye when he left…

At around naptime, I wondered if she was sleeping or crying or what. We had packed an “In Case of Emergency” bottle, since their instructions were to NOT send one unless they really needed one “to support the other kids who had recently given up bottles”. Should we tell them our other kid didn’t fully give up her bottle until she was 5 years old (and I am not kidding)? Maybe not.

As naptime was ending (2:30 pm), I pictured her crying again, asking for mom and dad, since she always wakes groggy and huggy. At 5 pm, we went to pick her up, after not having gotten “the call” all day. I was hopeful but afraid.

Here’s what really happened (per the teacher):

Even when we arrived, she was playing nicely near other kids (as toddlers do), which she continued right on doing after giving each of us a welcome hug. I thought she was going to cry when we made her leave all those toys. Also not so.

When a teacher tells you how your kid was INCREDIBLE and asks if she’s already been in daycare (nope), makes you feel like a bad parent. Why DOESN’T she miss you? Worse when the teacher says, “I was surprised we didn’t get a call from you guys.” HA! I had no idea we were allowed to call (other schools were not like that), but still, she asked that question AFTER I told her how obsessed I’d been all day, so I think I saved some face.

Anyway, we have another amazing child. Who gets so lucky??

After school, Zoe had “Pajamarama” at her school, which she kindly said earlier in the day, “Mom, I know what we can do for Ella’s birthday – we can take her to Pajamarama” (read: Zoe really wants to go and not have to go out for Ella’s birthday…) I told her that Ella would probably prefer her own special night. To which Zoe said, “Mom, everyone thinks Ella is cute, and this would give them a chance to see her.” (read: Zoe wants to show off her little sister to her friends.) Can’t blame a gal for trying.

Instead, Ella and I dropped off Dad at Pajamarama (lucky guy) and I took her to our favorite sushi restaurant, where they literally know my VOICE when I call in an order. They definitely made her feel special:

Yes, I noticed those things, too:

HAPPY BIRTHDAY, Ella! We are so lucky to be part of your family!