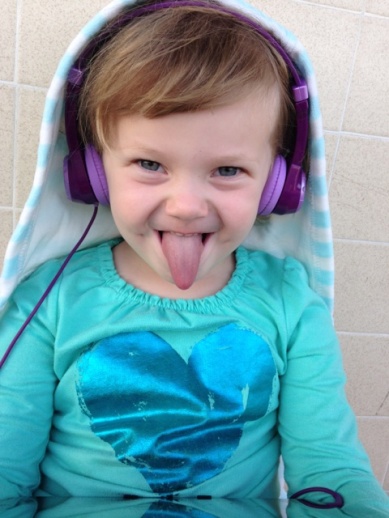 I’ve never broken a bone – didn’t have a stitch until I was 35 years old, and that was opening a can the stupid way (thumbs are not meant for can-opening). I barely remember shedding blood as a child, and I am confident it was my mother’s watchful eye and ever-present hands that kept me out of harm’s way. But she worried so. In fact, she still does. If I have a sniffle she’s convinced I have pneumonia or lung cancer and am just not telling her about it.

So, as a mother I’ve tried to fight my genetic predisposition for being an over-protective mom. It’s been over 2 years since I’ve moaned about it. That’s something.

But seriously, life is dangerous!

And so, to my credit, my daughter is taking swim lessons. Not so to my credit, I can barely watch (do you know how many children drown each year?!) To HER credit, she has NO FEAR, which is why my husband is generally the one taking her to lessons. And why he sent me this:

Last weekend at a Memorial Day BBQ, I was unable to look away. She jumped right into our friends’ pool along with the other, bigger kids and just started swimming – mostly in the direction of an adult, sometimes not. And though as you can see above, she can “swim”, she has no idea that she really can’t, yet. I basically held my breath the entire time, but part of me was so very proud of my brave and wonderful daughter (the less terrified part).

As if that weren’t bad enough, she’s never met a stranger (there’s a reason they say stranger DANGER). At dinner on my birthday there was another mom who was also celebrating, and we sang with the rest of the small restaurant then watched her blow out her candle. Right after we finished dinner, Zoe headed over to the owner of that restaurant, tugged on his pant leg and said “Excuse me. Would you bring my mom green tea ice cream with a candle too, please?”

While I was in NY a few weeks ago, Bart took Zoe to Disneyland, where she won 2 BIG Goofy stuffed animals, one of which she gave to a little girl on the way out who was crying.

What kid does that?!

(though it’s pretty cool that she did)

Ultimately, I’m thankful to have a child who embraces life, loves everyone around her, and has the confidence to try new things without fear. Even still, there will probably always be a part of me that just wants to keep her home safe – then I look around and see all those corners… Maybe I’ll pad her room ;)