So, 2 years ago, Santa came through with an awesome one:

So much JOLLY in one little card. But honestly, though we’ve been to see Santa every year since, he’s just not coming through with “the shot”. Last year, the huge Christmas tree near Santa in the mall was a much better backdrop (not that Santa is just a backdrop, but he’s not MY focal point). And this year, that same tree came through – with a little help from our little ham: 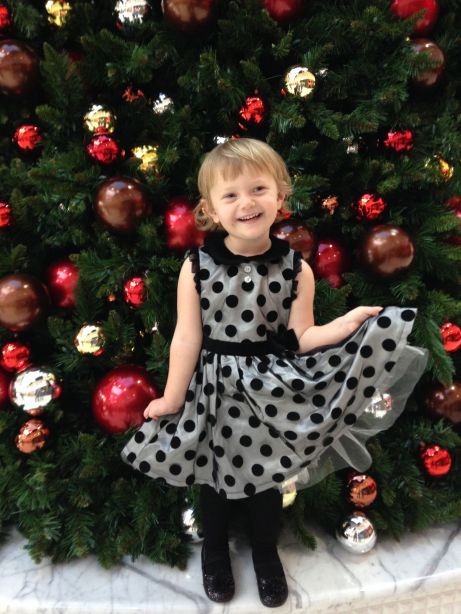 And that was our 1st shot. Of course, that didn’t stop me from taking MANY many more pictures – or from having visited 2 Santas (and buying the pictures). Maybe that’s where the “obsessive” part comes in?

If we’re being totally honest here, I may have been a little extra obsessive about the first Santa picture. Here’s how it went… We headed to Northridge Mall for “Reindeer Games”, which included arts & crafts and free gifts for the kids. Turns out, they also had a Santa (of course). We had let Zoe dress herself that morning, which she’s been more and more insistent about doing lately, and let’s just say she wasn’t “Santa Ready”.

Isn’t that what malls are for?

Her pants were acceptable, but that was about it. So I dragged my husband and child to Macy’s to grab a shirt and some shoes (which they didn’t have). Then I dragged them to the other end of the mall to Old Navy where some silver Santa boots were just the right thing. And then, our first Santa pictures.

Zoe was ecstatic – she LOVES Santa. She’d decided what she wanted to ask for: CANDY! (and she agreed to ask for World Peace on Daddy’s behalf). She hopped right up on his lap, took 3 awesome pictures and proceeded to ask for:

Who knew? Then I went over to pick out my favorite shot but “their server was down”. No problem. We were wandering the mall anyway. An hour later: still down but should be up in an hour. Lunch and another hour later I headed back over while Dad and Zoe headed to car, rainbow ice cream in hand: server was up, but the photos were GONE.  I ran out towards the parking lot to find my beautiful, freshly dressed daughter.

Ever wonder which color stands out most from the rainbow? BLUE. It was all around her mouth, and her tongue was completely blue. I was in shock. Decisions, decisions. I refused to leave without a picture.  So back on Santa’s lap, where she actually DID ask for World Peace for Daddy, and thankfully, the photographer caught this shot:

And the guy felt so badly about losing our first pictures, that he gave us 2 for one – and let me download ALL the shots from the second round. Now that’s customer service, Santa style!

3 thoughts on “The Holiday Card (Behind the Scenes)”