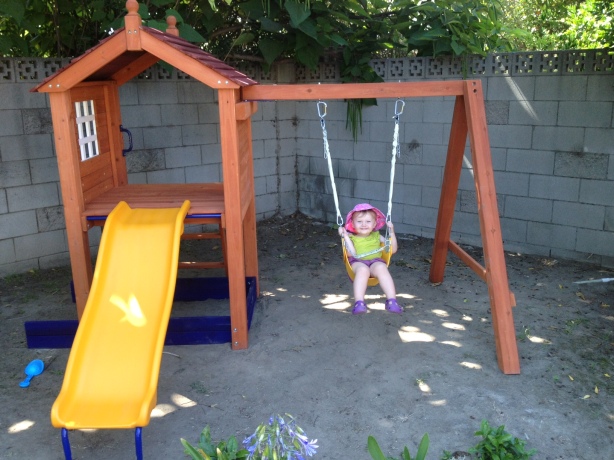 Oh, the things you do for love. First of all, extra super big thanks to my mother (who Zoe calls Nina) for the awesome swing set she gave Zoe as an early birthday present. Since her birthday is so close to the end of summer, Nina thought she could enjoy it most if she got it early! And she was right.

If you haven’t taken on a project like this with your spouse, for your small child, during the heat of summer (90+ degrees), then you might not understand what an undertaking this was. Let’s just say: I didn’t. But my husband is handy and loves to put things together, so I assumed it would be a piece of cake. I mean, there’s no real cutting, measuring, etc, and they send you all the pieces with step-by-step instructions. How hard could it be?

After 5 hours of sweating and swearing, I now know exactly how hard it could be. In fact, one of the last things to assemble on this set is a roof on the little house, which means creating a frame then attaching 14 interlocking slats of wood as tightly together as possible to avoid leaks. That house almost ended up roofless. As much as my husband IS handy, we have different ideas of perfectionism – and while I have an annoying need for perfection, I am NOT handy. But I am quite determined (my mother calls it “stubborn”) and have a strong need to finish whatever I start.

So, when it seemed like Bart was slowing down after doing most of the work himself (remember: I thought he’d ENJOY this), I was not ready to quit. Plus, I have the patience of a gnat, so I was baffled that it could take so long… So I decided to “help”. First, I put the roof frame together backwards. Outwardly, it doesn’t look so different backwards, but apparently, it matters. So I un- then re-assembled it, which Bart let me know was “bad” because if you take out a screw after screwing it in the first time, it doesn’t hold as well after further attempts.

Then, Bart started attaching the slats. Imagine how helpful I was then? In my infinite expertise, I could clearly tell that they weren’t close enough together to avoid leaks. So I insisted (after 6 of them were already attached), that he take them down and do it again. If only you could have seen the love in his eyes when I made that request, after he’d done all the hard work for the prior 3.5 hours – including sawing off the end of the under-the-house sandbox because I was convinced Zoe would trip on it and go head-first into a concrete wall. Makes you want to marry me, too, right?

Good news is our marriage survived. Even better news is ZOE LOVES HER SWING! Perhaps less good news is that it squeaks. A lot. (VIDEO PROOF) But Zoe doesn’t seem to mind. She has her own swing in her own backyard, and as she proudly tells anyone who will listen, “Mommy/Daddy build it”. And we sure did.